Founded in 1978, Penny Hydraulics established its nuclear handling division six years ago and has since overseen a series of successful projects. Daniel Searle visited the company.

Penny Hydraulics is based near the historic market town of Chesterfield, in Derbyshire, United Kingdom. A manufacturer of vehicle-mounted cranes and hydraulic lifting equipment, the company was founded in 1978 and just a few years ago introduced its nuclear division, which produces bespoke solutions for nuclear power projects.

A key part of those solutions is the mechanical handling equipment used for manoeuvring nuclear materials both in active plants, and during the decommissioning process.

"We produce one-off products, engineered to provide cradle-to-grave solutions for applications in the nuclear industry," says Simon Pykett, head of the company's nuclear division. "These include decommissioning power stations, handling solid waste in wet vaults, or the removal of radioactive sludge for encapsulation.

"The division has been running for almost six years-I was taken on by the company to head it up. The mining sector, which Penny Hydraulics also supplies, was in decline, so the company was looking to diversify.

"The move into the nuclear sector began with a one-off project, providing equipment to remove radioactive material at the Dungeness nuclear facility.

"Since then, we have been involved in more decommissioning, at facilities such as Bradwell A site-there has been a heavy push in the industry for decommissioning. It's what happens when the new nuclear plants come online. We have a lot of kit installed at Bradwell, to recover fuel element debris such as fuel rod casings."

The company's facilities at Clowne, near Chesterfield, are due to be expanded in the near future to accommodate its growing business.

"The business is growing, and this has been achieved by maintaining the same level of quality in our products while looking at new production methods, running the business efficiently to keep our administrative overheads to a minimum, and reducing stock levels.

In the last sales year we recorded turnover of £6.1m, almost 10% more than the previous year. By the end of 2016 we aim to have grown turnover to exceed £6.5m. We have already recruited an additional ten members of staff over the past year and is now recruiting again for further positions in its Chesterfield factory and offices.

"Plans are being drawn up to expand the current facility in terms of office space, production space and storage space to match the expected increase in sales. This work is due to commence in the final quarter of 2015."

Part of that growth will take place in the nuclear division, which as well as working on decommissioning plants, is also supplying new and existing facilities, says Pykett:

"We're also working on designs for Hinkley Point C for when it is built, providing mechanical handling and lifting equipment to process waste. These included lift and grabs, bogeys, and lifts between floors. The kit has to have an 80-year design life.

"For a facility at Sellafield, we're currently supplying four lifting beams for up to 25 tonnes-these are due to be delivered in February. They'll be used to move waste sent for processing from the decommissioned facilities at Harwell in Oxfordshire.

"We've worked on various sites across the UK, including reactors in the Magnox fleet, working mostly in decommissioning. We first worked on the plant at Dungeness, followed by the Bradwell facility, where we installed over £1m of kit to remove 200t of waste from the vault, working from 2011 to 2015. This included a crane arm and grab mechanism. We also supply gantry cranes, or process cranes, for repeat use-such as at Hinkley Point A.

"The cranes will suffer surface contamination during use, and after the project is complete they can be simply packaged up for long-term storage, dissolved in acid, or processed at a facility in Cumbria with shot-blasting, which removes the surface so the equipment can then be recycled.

"The Dungeness system worked well, and was the project through which we made a name for ourselves in the sector. At Bradwell we installed a cost-effective system that also worked extremely effectively.

"Safety features are very important, and often include dump valves for the crane arms that lift the lead lids of waste barrels. If there is a power failure, the valve ensures that the weight of the lid pulls the crane arm down, to cover the waste barrel and allow the operator to then access the area safely. We have similar systems for overhead gantry cranes and hoists. One consideration is that the power supply needs to be on the side of an overhead gantry crane when working over radioactive waste, rather than at the top, as maintenance cannot be performed within line-of-sight of the radioactive material.

"Other systems we have supplied include hydraulic cutting kit, for processing parts so they can fit into lead containers-and 25t bogeys, which move cast-iron containers used for long-term storage." 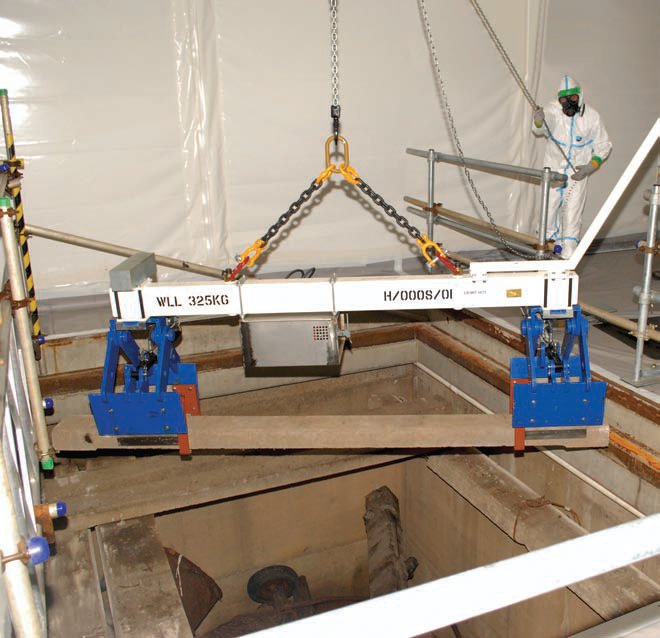 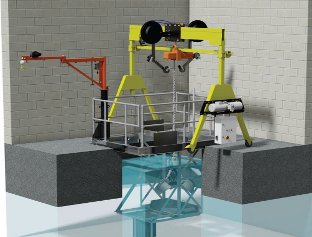