If you're in the business of installing windows and watch your colleagues elsewhere on the site using lifting equipment, hoists and cranes to do the hard work for them, wondering why a similar tool isn't available to you, I might just have found you something for the Christmas list...

The manufacturer of the so-called Eazi Lifter has promised to cut window installation times, save lives and comply with health and safety regulations. It's big talk, but it might have a point.

Following recent success in the US, the Harnser Solutions team are turning their attention to the UK to deliver the same results reported from across the pond.

The Eazi Lifter is a hand carried hoist weighing 11kg and can "fit behind the driver's seat of a car." It is fitted with a hand operated braked winch loaded with up to 20m of 1.3t SWL Dyneema winch rope, allowing typical lifts up to a fifth story either by a pair of heavy duty replenishable vacuum lifter cups or a sling and hook configuration. It has a SWL of 125kg, with each product leaving the factory tested to 110% of this load.

The concept was actually first launched around two years ago, but that was a different hoist called the Harnser. Since then it has undergone many transformations to become the hoist it is today through work with American clients and within the UK. It is now a PLD that suits almost any reveal (including sloping headed reveals), and is lighter, stronger and more adaptable than it was previously, the manufacturer says. 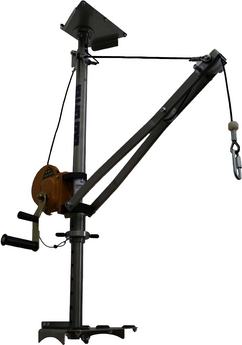 Both the Harnser and the Eazi Lifter have worldwide patents.

"Fitting teams from Seattle to Las Vegas have reported significant reductions in installation times, and often with only half the number of personnel," it told Hoist.

The highly litigious nature of US society means the product has gone down a storm there and the manufacturer is eager to find a way into the UK market, but the focus has to be different. The UK's Health & Safety Executive are said to have known about the product for a "long, long time but we feel that until the public know about what the Eazi Lifter could do for health and productivity, and call for it like the Americans have, then we'll get no recognition, which is a shame because it genuinely would save lives and nearly eliminate serious injuries that ruin people's lives," I was told.

The Eazi Lifter sits in a window reveal, allowing one man to wind a 125kg frame straight into position with the turn of a handle. "No ladders, no scaffolding, no stairs, no fuss."

Harnser managing director and Eazi Lifter inventor, Jeff Crowder, insisted that if used efficiently, the Eazi Lifter will double productivity on many sites.

"The beauty of the product is that previously a four-man job can now be undertaken by two fitters," he said, "and when the weather is calm and the lift is straight up, there's nothing to stop one fitter doing the job alone."

Cynthia Becker, health and safety director for Milgard Windows in Tacoma, Washington, said: "At the moment our yearly injury payout totals millions of dollars but with this new kit there is now next to no chance of hurting yourself."

Crowder responded: "Every day you see fitters struggling up ladders with frames too heavy for them to carry, all it takes is a slippery ladder, uneven ground or an unbalanced load and that window could come down, possibly onto a bystander, and the fitter with it."

The Eazi Lifter is made from strong but light gauge recyclable stainless steel sections which together with an extension kit can extend to 2.9m for tall windows, doors or for applications where the window sill base plate is replaced with a floor mounting base plate.

The hoist's body is installed within the building and the boom arms deploy out through the window aperture. Thrust bearings in the head and base plates allow a pivoting facility so that loads can be moved from in to out and vice versa. "The positioning of equipment inside the building allows fitting to continue through rain, snow, ice and wind and from a safe and comfortable environment," the manufacturer concludes.

Whether it takes off here in the UK or not, it'll certainly be an interesting product to watch closely. I'll certainly keep you updated as to its progress where I can. In the meantime, there's a link to the company's website below.