UK-based Reid Lifting, a manufacturer of lightweight gantry and davit cranes, provided a customised version of its 1t-capacity Porta-Gantry system to a wastewater treatment facility in Ajman, United Arab Emirates.

Black & Veatch, an engineering, procurement and construction firm and part of Ajman Sewerage’s joint venture ownership, required a system to lift 600kg blower motors from acoustic housings for maintenance, repair and replacement at the Ajman facility.

Reid Lifting visited the site with local regional partner Tools Middle East, and was informed of the complexity of the demands of the lift, and the range of alternative solutions that had been previously ruled out by personnel at the plant.

Nick Battersby, managing director at Reid, said: “An [Ajman] engineer told us he had previously been presented with a number of alternative solutions, ranging in cost from £15,000 up to £75,000, but they didn’t have faith in utilising a mini crawler crane, among other suggested methods. With some ingenuity we were able to provide a more viable solution at a fraction of the cost [approximately £4,500].”

The six blower motors, used to pump air into the sewage, are surrounded by acoustic housing to reduce noise levels. However, issues included that only panels at the front and back of the housing can be easily removed, there was only 390mm of headroom between the lifting point of the motors and the top panel of the enclosures, and the flooring was uneven and access was difficult.

Battersby said: “The motors were located on a plinth and we had to utilise a sloping walkway; the floor was uneven on the other side of the acoustic housings too. The solution had to accommodate the extremely tight headroom and the ground conditions, but we were able to base it upon our existing PG1000 Porta-Gantry product, which already boasted features that appealed to the end user in its lightweight, portability, and ease of manual setup.”

The PG1000 was customised with a bespoke trolley system and pick-up bar, with wind-up jack legs. Reid created a ‘gull wing’ attachment to create lifting points higher than the top of the beam, with one of two hand chain hoists on each side rigged to take the load further down the motors, lift them off fixtures, and free them from the housings.

The 4m-long beam was threaded through the open enclosures and mounted on two frames, the uprights of which provided coarse height adjustment in 50mm increments, before then being levelled with the fine height control of the jack legs. This enabled Reid to take the top of the beam to within 2mm of the top of the enclosure.

Following the completiong of the project, Ajman Sewerage kept the system on site for use with other applications. 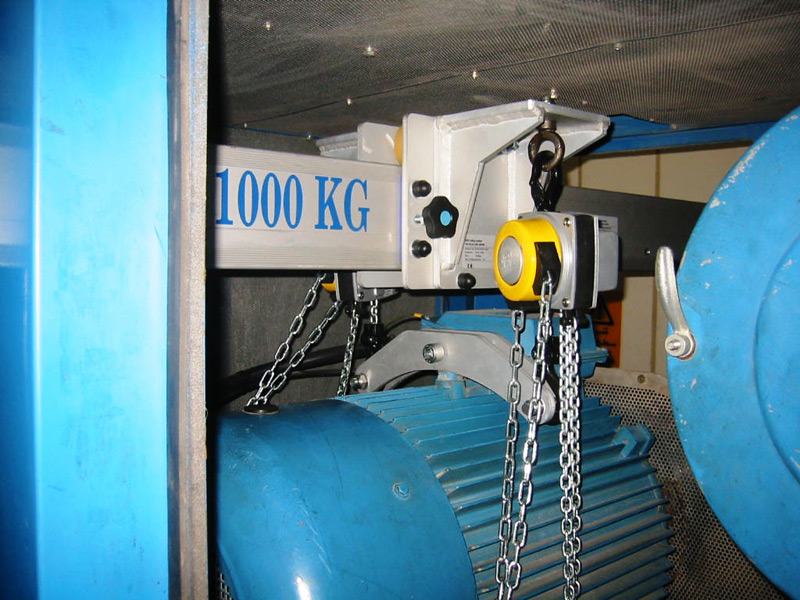