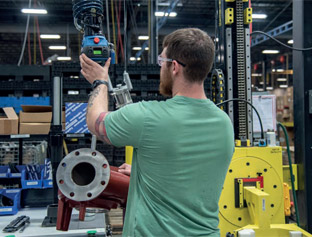 Getting to grips
31 March, 2021
Demand for speed & safety in critical lifting equipment is on the rise and while some projects have been put on hold due to coronavirus, the renewables sector is growing. Jenny Eagle investigates
> read more

Southern Comfort 31 March, 2021 The market for hoists and factory cranes in Southern Europe is by no means as dire as some, in light of the pandemic, might have been led to believe. Julian Champkin finds optimism amongst its peers.

From Russia with Love 17 February, 2021 Despite the Covid-19 pandemic the industry is continuing to make investments, building new plants, upgrading existing cranes, seeing a rise in electric car sales and foreign companies expanding in Russia

Raising a storm 17 February, 2021 2020 was a year like no other. The pandemic and the prospect of Brexit between them made it a year to remember, though perhaps not for the right reasons. Julian Champkin looks at how the UK lifting market weathered the storm and how it is looking forward to 2021.

Weigh it up 25 January, 2021 Load monitoring can be split into two main areas: overload protection and remote monitoring. Almost every crane will be fitted with one, if not both, systems which can be used to enhance safety and productivity. Simon Hastelow reports.

Rope swing 25 January, 2021 Synthetic rope from DSM’s HMPE fibre Dyneema has been produced for many years, and is now making the move into various specialised applications in the hoist industry. Daniel Searle reports.

Push The Right Buttons 23 December, 2020 Even though the standard pendant control is still found attached to many industrial hoists, remote controls have become ubiquitous in almost every sector. Simon Hastelow reports.

Can you dig it? 23 December, 2020 The mining industry relies on highly-specialised lifting equipment for maximum efficiency and minimal downtime. Daniel Searle spoke to some of the leading manufacturers in the sector.

Swift recovery 23 December, 2020 All eyes have been on the USA; its pandemic response and its election have disrupted business and made forecasting and planning more than problematic. How has the market for lifting gear coped? And will 2021 be easier? Julian Champkin reports.

What a treat 23 December, 2020 A modern waste processing plant in Spain ordered cranes and hoists from compatriot manufacturer Jaso.

Working in a vacuum 24 November, 2020 Julian Champkin finds that vacuum lifting is proving useful in tackling social distancing needs, in the online retail industry and beyond.

NIDEC ASI awarded €12m contract for electrification of berths in the Port of Malta
Nidec ASI (part of Nidec Group) has signed a €12m contract with the Maltese company Excel Sis for the creation of a “shore-to-ship” project for the port of La Valletta (Malta).

Mammoet expands in Asia, opening subsidiary office Conbit
Conbit, a subsidiary owned by Mammoet has opened its Asia Pacific (APAC) hub in Malaysia. The office is located in Johor Bahru, and is a major move for Conbit to market its services in this region.