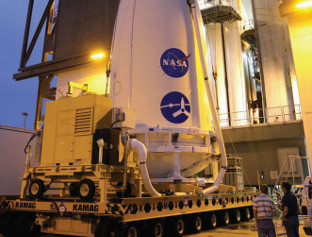 Top Gear 09 January, 2020 About 30,000 separate parts come together to make a single car. A single delay on the assembly line can be disastrous. Julian Champkin looks at lifting requirements in the automotive industry.

Keyn Interest 09 January, 2020 LiftEx 2019 took place in Milton Keynes in November. Daniel Searle reports from the show on some of the products that were launched during the event.

QUAY SKILLS 09 January, 2020 A ship-to-shore crane constructed at a port in Lisbon had to be jacked up and moved to its final position on the quayside.

Taking control 13 December, 2019 There is a growing movement in the hoist sector towards wireless control systems that can ensure greater safety and less downtime for operators, as well as intelligent devices that provide increased levels of production data. Tom Woerndl reports.

Highly refined 13 December, 2019 A manufacturer of equipment for refineries and power stations required an upgrade to its steel-handling cranes in Germany.

Keep on running 22 November, 2019 Maintenance is an essential for safe operation of hoists. Julian Champkin looks at requirements and methods.

Best of both Hoists 22 November, 2019 A new hoist, and custom systems, are boosting LTM’s cleanroom business.

Lifting Silicon chips 22 November, 2019 Mennens and Elma are supplying highly precise cleanroom cranes that will be used in the development of a new generation of silicon chips. Daniel Searle reports

Heavy metal 22 November, 2019 A 41m crane installed at a UK steel plant is due to be joined shortly by the largest-capacity crane ever made by manufacturer Jaso Industrial Cranes.

Light fantastic 24 October, 2019 Light lifting systems may seem simple but, as Julian Champkin finds, they are every bit as useful as heavier lifting equipment and repay consideration and good design.

Keep on moving 24 October, 2019 Intermodal cranes and lifting apparatus are vital to the movement of world trade. Julian Champkin looks at this large and varied sector.

New faces 24 October, 2019 The lifting industry has implemented a range of programmes and initiatives to attract new workers, both young and experienced. Daniel Searle reports.

Lord of the Gdansk 24 October, 2019 Liebherr Container Cranes has delivered a state-of-the-art, ultra-large container crane to the DCT Gdansk container port in Poland.

Northern heights 18 September, 2019 John Bensalhia takes a look at the North American hoist market, and reports on its notable projects, products and innovations.

Backs and basics 18 September, 2019 Aching backs and pains in the joints are no longer acceptable as inevitable sideeffects of working life. Julian Champkin looks at how advances in ergonomic design and practice are helping to eliminating them.

Features By Category view all