Newly developed is UK manufacturer DLM’s new TW-3.0 wireless electronic range, the latest upgrade for a range of load monitoring products that is coming soon to the market.

It creates networks of up to 12 individual devices, from a single hand-held display and load cell to large networks of devices up to 800m apart.

Some of the TW-3.0 features include an audible alarm, USB data logging, serial or analogue output and four advanced maths channels for totalising and use of trigonometric function which enables easy calculation of fixed wrap angles and line tensions.

It can also monitor dynamic load with a rolling feature which provides a stable reading based on the previous ten seconds of readings.

The TW-3.0 is designed to work well in high-noise environments around powerful Wi-Fi networks or port terminal environments. It limits the effects of large metal objects nearby and the RF protocol uses bespoke full-spectrum frequency hopping, changing channel 20 times a second to ensure the critical reading is displayed.

Halford says the TW-3.0 range of products is designed to be user-friendly, with a high-quality LCD display which is optically bonded during manufacturing, removing light refraction and the need for a back light.

In May, Straightpoint, which has bases in the UK and US, launched Colt, a digital tensionmeter to measure wire rope tensions up to 5,000kgf. Colt, which took 18 months to develop, was designed in response to applications where a wire rope is already under tension and cannot be broken to remove the load for weighing.

“It clamps onto the wire rope and deflects and measures it while it’s under tension,” says director David Ayling. “It could be used on flare stacks or cell towers, elevator cables, architectural wire ropes or a hoist with a wire rope to a hook under tension.”

Straightpoint launched Colt at a show in Dallas, Texas and Ayling was astounded by the response.

“It was only a one-and-a-half day show and we had more than 120 enquiries. I’ve never seen anything like it,” he says.

Colt includes what Ayling describes as “a real ground breaker and a gamechanger”: a bluetooth module which transmits the load data wirelessly to a smart device running Straightpoint’s app. The company is now rolling out this technology to all its products.

“Readers of Hoist may not be interested in guy line tensioning but the fact is, it’s allowed us to develop bluetooth load technology. Sometimes the hand-held display costs as much as the load cell. Everybody has a phone in their pocket now so it made sense to develop a bluetooth load cell that connects to an app on your phone,” says Ayling. “Now if you want some weight data on your overhead crane you just grab your smartphone.”

He adds that hand-held displays are often lost or broken whereas people generally take much better care of their phones. Canadian distributor Industrial Power & Control has also noted the wireless trend. “With the advancements of technology and everybody needing information immediately, there are developments around smartphone/Bluetooth integration between the users and their equipment,” says operations manager Mitch Dahmer.

UK company Mantracourt, which has been providing signal conditioning for load cells for over 40 years, developed the wireless BroadWeigh system specifically for the entertainment industry. Over the last few years it has seen a large increase in interest in load monitoring. “This ranges from smaller, sixcell systems to monitoring up to hundreds of points. Examples of popular use are weighing reports for touring shows and live monitoring of dynamic loads,” says BroadWeigh sales manager Tom Lilly.

BroadWeigh is a fully modular system that can be customised to a client’s requirements.

“Different numbers of shackles can be added easily and our free software allows you to create your own display layouts with load cell data overlaid on rigging plots or other images,” says Lilly.

During this year’s world tour by singer Adele, a 40-cell wireless BroadWeigh system was used to monitor the loadings on each lighting and audio point during the load in and load out.

BroadWeigh is a wireless system so not having to run cables saves time on rigging and de-rigging.

“Also all our software and instruction manuals are freely availably from our website. The system is simple and intuitive to use, with the simplest set-up taking less than five minutes. More complex set-ups are possible with our very flexible viewing and logging software,” says Lilly.

“More than ever our customers talk about big data or 4.0 Industrie,” says managing director Josep Compte. Airpes’s response to this trend is the Eagle electronic limiter, described as “the new brain” for industrial cranes. It is designed with a multi-overload protector, safety control, multi anti-collision crane system and full connection with the Airpes Black Box app.

The Eagle can control up to four hoists and up to ten combinations of the sum of loads. It can also cover up to four different zones of load control.

Airpes says the Eagle is easy to configure and also to customise to a company’s individual needs.

The need to measure larger loads is another notable trend.

Straightpoint has customers around the world, in all sectors from construction to entertainment.

“We supply all sectors from circuses to 3,000t modules going offshore,” says Ayling, adding that 80% of business is cranes and heavy industry.

Common to many of these industries is that load capacities are increasing. “There are bigger cranes, bigger lifts and bigger rigging. Only a few years ago a 200t load cell was big; now a 500t isn’t very big. We’re now looking at 2,000t compression cells,” says Ayling.

The manufacturing is easy; it’s the testing that’s most challenging, he adds. There is only one testing machine in the UK, at the National Physical Laboratory in London, and that has a capacity of around 4,000t, well below the 5,000t-plus requirements of some companies. “We recently had an enquiry for 6,000t but we couldn’t test it so we suggested two 3,000t load cells and they were happy with that,” says Ayling.

Using multiple load cells is an efficient solution but Straightpoint is considering installing its own testing facility so it can supply larger single units.

“It’s a big capital investment but if we can build a business plan to support it, we will do it,” says Ayling.

Straightpoint has also seen a trend of customers needing to lift and weigh machinery to obtain CE approval. “It might be a fork lift or a cement mixer— any sort of equipment or machinery so they can put a CE stamp on it,” says Ayling. Straightpoint was the first manufacturer to incorporate RFID tags into its load cells and Ayling takes pride in other aspects of the business too.

“One of the biggest things for us is not product, it’s the lead time. We’ve invested a lot of money in inventory so if you want a 500t compression load cell you can have it tomorrow,” he says.

All Straightpoint’s products are aluminium, so they’re light, and they operate on standard AA batteries. Aesthetics are also important, says Ayling: “I like our products to look good, for people to look at them and think ‘I want one of those’. We work as hard on our brand and who we are as we do the product.” All Straightpoint’s manuals are multilingual and pictorial and all products are packaged in a flight case.

“We include videos to show how products work and there are QR codes etched into them so customers can scan them and get the manuals,” says Ayling. All this is a successful recipe for Straightpoint. In the last few months it has bought a third unit in the business park that houses its UK headquarters and it is setting up its own machine shop to make everything from the circuit boards to all the blocks.

“We’ve brought everything in-house so it gives us a lot more control, better lead times and much more flexibility,” says Ayling. DLM recently designed and manufactured a 50t tensile and compression test machine for its new Nigerian distributors, allowing them to calibrate load cells locally. DLM is now doing the same for its distributors in Singapore.

Requests for customisation is another trend to which load cell manufacturers are responding. “People will say they love a product but they want it a little shorter, longer or wider. Often we have integrated solutions for cranes, hoists and winches so we’ll build custom load cells to fit into a machine,” says Ayling.

An example is a recent enquiry from the US for gates on a dam. “Six gates need load sensors so as they pick them up they can tell if they get stuck and that information is fed back to a control system,” he says.

DLM says its expertise also lies in the custom design of not only load cells, but also load monitoring and electronic systems. “A lot of offshore companies come to us with a problem and we’re able to find a solution and custom build a product to suit their application,” says Halford. “Rather than just supply the load cells, we like to get involved with the whole system the load cell is being used in. We’re also able to assist with the installation of the equipment.”

DLM designs and manufactures all its products, including the hand-held displays. This enables it to make small changes to functionality in response to a customer’s needs.

From its beginnings in 2002, says Compte, Airpes’s focus has been providing weighing systems that meet customers’ specific requirements. An example is the company’s hook block scale which can be adapted to any type of crane and to load capacities from 2t to 250t. The system allows the weight of the elevated load to be read without the need to move it to a steady weighing machine. Airpes developed a 180t special hook block scale for Slovenian company Indenna Dvigala. The scale has an accuracy of +/-0.1%. Tractel has just finalised the renewal of “virtually the entire range of load measurement and control products,” says Jacques De Ceuster, measure and control, group product manager.

The company recently launched the Dynafor LLZ2, which he says offers “the best possible quality/price ratio among electronic load indicators”. It too, has introduced wireless connection between all its equipment, as well as monitoring software and jumbo LED displays.

Product developments are also influenced by regulation. In response to the SOLAS Chapter VI regulation 2, UK manufacturer DLM developed the Container Monitoring System which can be installed on port vehicles and used to weigh containers before they’re loaded;. “It will provide accurate verified gross mass of containers and can be used with many different types of container lifting equipment,” says Halford.

The system also provides accurate centre of gravity calculation, overload monitoring, overload reporting, integration to the terminal operating system and usage reporting. “It replaces the twistlocks in port vehicles with twistlock load cells and enables a weight to be recorded, along with the centre of gravity,” says Halford. 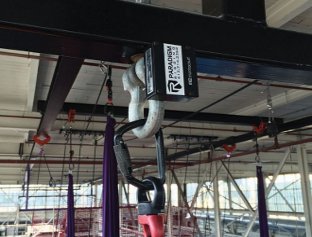 BroadWeigh is a fully modular system that that allows any number of shackles to be added. 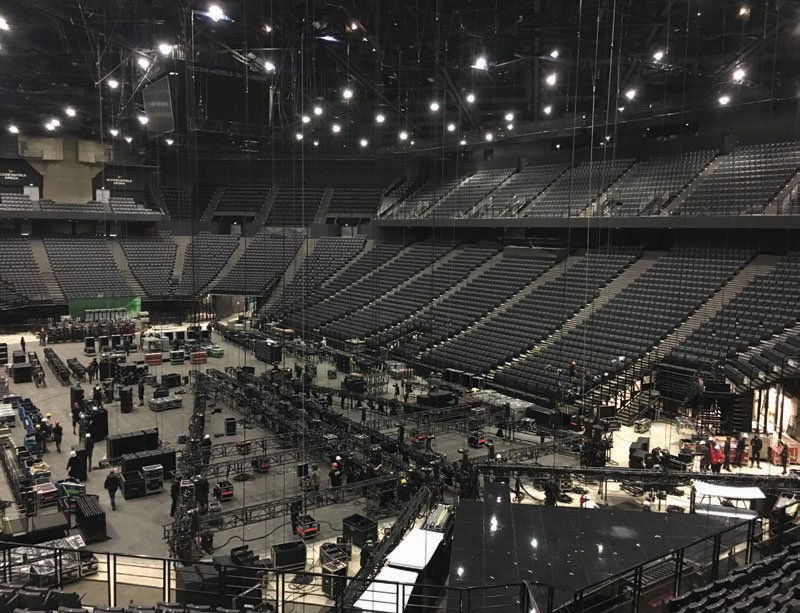 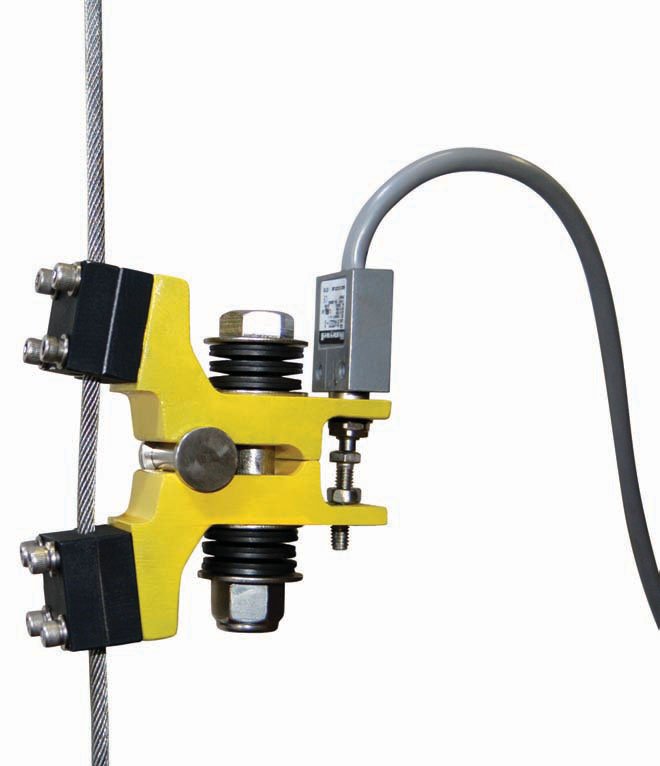 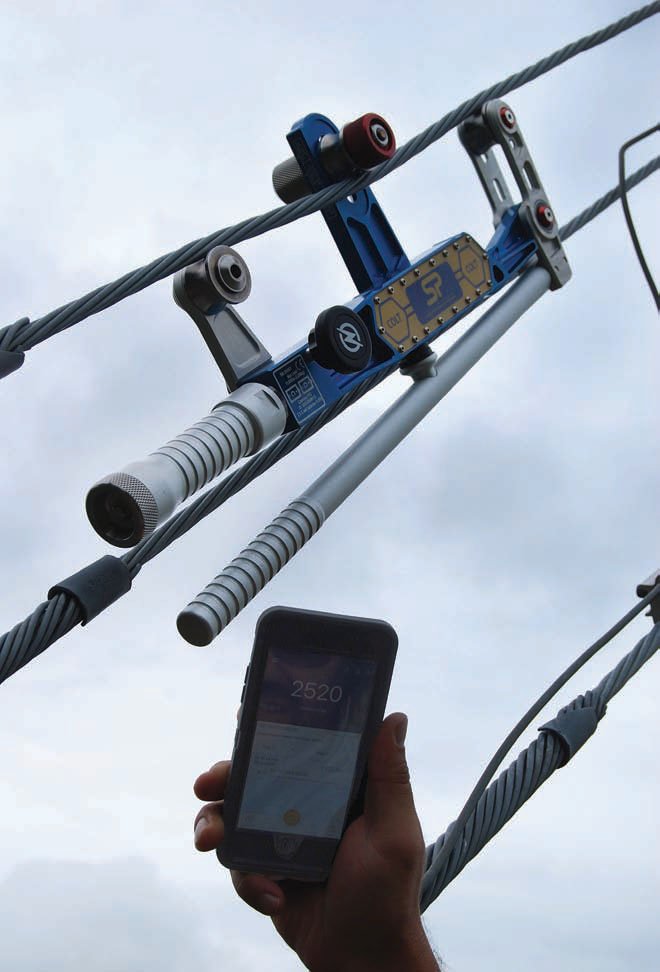