The Crosby Group has launched an updated version of its HHP Bluetooth App for monitoring loads in several additional applications, increasing productivity and safety.

The free-to-download app, initially launched in 2018, connects to their Bluetooth load cells with a wireless range of 100 meters or 328 feet.

“The upgrade enables us to monitor loads in a number of additional applications. Truck haulage with chain lashes will be one of them, for example—a perfect combination with four ChainSafe load cells,” said Thomas Dietvorst, director, Technology Solutions, The Crosby Group.

“We appreciate our network of partners in the industry who have worked with us to bring this next-gen HHP app to life and continue our shared journey of delivering innovative solutions to enhance safety and productivity at job sites.”

The updated version, allows the app to connect wirelessly to up to four Bluetooth load cells on a single smartphone, versus one with the previous version, following demand from customers. Another feature is the capability to set a lift threshold; when that is triggered the lift is effectively counted. In other words, if a user has two cranes working alongside each other, they could see how many lifts per day each one has completed and what the productivity is.

Through a series of updates, the app now includes an analogue load indicator on the main screen and is offered in in English, Dutch, Spanish, Norwegian, Japanese, and Chinese. The app also automatically adds GPS coordinates into data logging reports and features updated overload and warning alarms to accommodate manual value entries.

Bluelink is a 6.5t (14,300 lb.) capacity load cell, targeted at end-users that remain loyal to traditional equipment but benefit from reading the data on an iOS or Android smartphone installed with the app. The recently launched 4t capacity ChainSafe, for protection of cargo during transport, is a smart dynamic solution for measuring the load on lashing, load securement, tie-downs, and chain sling leg—and is designed for the transportation and construction industries to secure loads and cargo. Towcell, meanwhile, displays wirelessly the weight being towed by road-going vehicles.

Other new features on the Crosby Straightpoint HHP2 Bluetooth app, which can be downloaded in a simulation mode for trials, include audio and visual alarms on overload per channel; option to set and record overload incidents; and recording of total loads, weight, and total lifts, for reports. 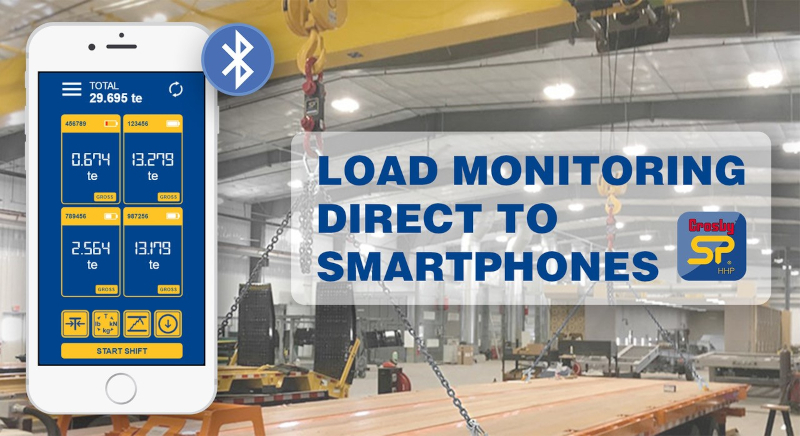