The 18,000m² plant, which has been in operation since the end of 2021, is part of an overall plan to develop and modernise industrial tools at all the group's sites. It was launched with the aim of increasing the group's production capacity in response to strong demand from the European and North American markets.

"We are pleased to have met our customer's technical requirements. We were well aware of the demands and constraints of Manitou Group, with whom we have worked for many years. We completed the order in just five months, and the production unit was ready for operation in November 2021," said Ludovic Mathys, CEO, Sere Maintenance.

The site is the second production unit of Manitou Group in Candé, and the sixth in the Grand-West. The group's historic factory is also located in Candé and maufactures industrial aerial platforms.

SERE Maintenance, designer and manufacturer of lifting equipment, handling systems and overhead cranes, and a member of the SAV Verlinde and EUROPONT networks for Brittany and the Pays de Loire, is responsible for supplying lifting equipment and maintenance.

After studying Manitou Group's needs regarding the creation of two complete lines for the assembly of aerial platforms, SERE Maintenance proposed a set of 15 overhead travelling cranes equipped with EUROBLOC VM hoists from Verlinde. This range of electric wire rope hoists can handle loads from 2,000 to 20,000 kg and has two standard steering and lifting speeds to optimise the production process.

"The industrial equipment proposed by Sere Maintenance corresponds perfectly to the level of performance we expected for our new plant. These hoists ensure optimum safety for all our teams and are adapted to the dimensions of our site. Working with local partners is also very important to us in order to facilitate exchanges throughout the project," said Michel Merceron, industrial development manager, Manitou Group.

All of the cranes, ranging from 1.6 tons to 4 tons, were manufactured by SERE Maintenance and customised to suit the ergonomics of the factory: one of the cranes has been extended to cover two bays to move from one production line to another; another crane was designed so that the hook of the hoist could safely bypass an office area; the cranes above the assembly lines have a feedback in the feeder shaft so that the line does not start until the hoists are in the safe position. The contact is electrical, without radio link, which guarantees its reliability.

All the cranes are radio controlled. The hoist power lines are of the cable chain type, which minimises the risk of snagging and eliminates damage to the power lines. 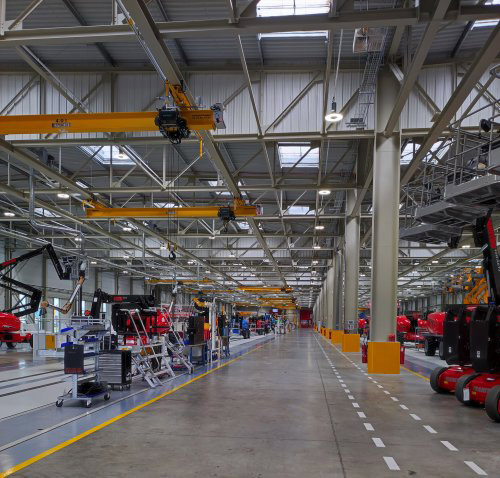