UK fertiliser producer Cleveland Potash selected Qualter Hall, service engineers of Barnsley, UK, to design and build a gantry as part of the headgear at Boulby Mine in Cleveland, UK.

Qualter Hall will build the headgear and other equipment adjacent to the existing tower this year.

The final installation will take place during the mine holiday shutdown in August/September 2013.

Qualter Hall is jacking and then sliding out the existing 2,700t concrete headgear 50m from the shaft on polished stainless steel slide paths, where it will be demolished.

The new 650t steel headgear, which will have been prebuilt on slide paths about 20m from the shaft, will be slid into final position over the shaft within the holiday shutdown period.

It will also be responsible for civil works and foundations, concrete outer tower, airlock arrangement and demolition of the existing 55m high concrete headgear structure.

The new design will allow uprating the system in the future, so that the size of the two 23t capacity skips can be increased to 30t.

The Boulby mine supplies around 55% of the UK's potash. Operating since 1973, it is currently the UK's only potash mine. It is located in the North Yorkshire Moors on the northeast coast of England.

The facility extends 1,300m below ground level and as far as 8.5km out underneath the North Sea.

Potash is used for fertiliser production, as well as for glass making and applications in the chemical and pharmaceutical industries. The mine also produces salt used in road de-icing and farm cultivation. 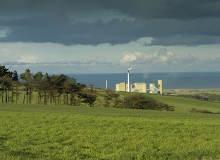