MMA 'Misconceptions about End Stops still exist in the marketplace'

In the second of three video series with MHI, (the US material handling, logistics and supply chain association), we catch up with each of the hoist and lifting attachment associations; HMI, the Hoist Manufacturers’ Institute, MMA, the Monorail Overhead Alliance and CMAA, the Crane Manufacturers’ Association of America, to find out the latest news.

Here, Jerry Eischens, president, MMA, talks about how the alliance is reworking its MH27.1 and MH27.2 track specifications and how there is still misconception in the marketplace regarding End Stops, spacing interlocks and challenges surrounding raw material costs.

Eischens currently oversees the engineering and marketing functions of the group for enclosed track manufacturers and patented track crane manufacturers, and his tenure will come to an end in October, after which Brian Stephens, senior product manager, Demag, will take over as president following the Fall meeting.

Speaking about his role Eischens said: “With the group itself it’s nice to get together with like-minded individuals in the same industry. We don’t share competitive information, but we work towards the better good of the industry itself and the specifications for all the member companies to be aware of, which serves the end user as well.”

Similarly, MH27.2 was approved and published in 2017, in the interest of improved uniformity of underhung crane and monorail performance and enhanced public safety. This standard provides guidance regarding design practices and performance testing criteria for underhung cranes whose end trucks operate on the internal flange of a runway using enclosed track section; and to trolleys (carriers) operating on single-track monorail systems, including all curves, switches, transfer devices, lift and drop sections, and associated equipment.

Eischens said MMA is currently reworking the MH27.1 and MH27.2 track specifications as well as updating its ‘Frequently Asked Questions’ (FAQ), to be used as a reference for members and non-members alike. He said the alliance has been actively trying to make sure the specifications are good working documents for those that need it.

He said for example, two of the most common FAQ where confusion remains within the industry include; End Stops and spacing interlocks.

To ensure that a load carrying device suspended from the track does not travel off the end of a run or spur as it moves the load horizontally, vertically and laterally, monorail manufacturers integrate safety end stops. These significantly reduce the risk of an accident or injury caused by the overhead load and its carrier falling off the end of a track.

They can also be used to segregate individual cranes and trolleys along different sections of the same rail, preventing a collision and restricting their movement to a specific work area within a facility.

Different from an end cap — which is used to close off the open end of a rail — end stops are typically positioned at the farthest point that a load and its carrier can travel. This is often a few inches (or more) away from the end of the track. Offered in a variety of configurations and materials by different monorail manufacturers, the majority of end stops are constructed with a layer of material, usually rubber or polymer, with a steel rod or bolt embedded inside.

Although end stops are designed to impede a carrier or trolley’s travel, they are not to be used solely for that purpose. Rather, the operator should always maintain control of the load as it is transported overhead and stop its travel at the designated positioning location either manually or with the controller on a powered system. End stops are intended to serve as a failsafe to prevent accidents or injuries should the load travel past that target location; repeatedly using them to stop a load will likely reduce their usable lifespan and potentially compromise the safety of the operation. Inspect all end stops — along with the rest of the monorail system’s components — at regular intervals to verify that each is securely fastened and that there are no signs of damage, such as dents, cracks, or other deformations.

Crane interlocks allow for accurate alignment and smooth travel of a hoist carrier between two adjacent cranes or between a crane and a monorail system. Load bar stops prevent carriers from rolling off open ends of cranes. Both manual and power operated interlocks are available for single and double girder cranes.

While many companies use monorails to move workpieces, products, or other loads from point A to point B, applications that require more flexibility can have curves and switches integrated into the system. Curves allow for direction changes to avoid obstacles or route a load to a choice of locations. Track switches enable a load carrier or trolley to transition from one track to another seamlessly, diverging or curving off along a branch path and connecting to multiple work cells.

However, when adding curves and switches to a monorail, it is important to investigate the ability of the overhead facility structure to bear the weight of the system prior to its design and implementation; if not, a freestanding structure can be constructed to support the system.

“The End Stop sis something very simple but there are some misconceptions on what they are designed to do and how they should be utilised also the proper way of gapping or spacing interlocks for cranes that are attached to spurs. There seems to be some misunderstanding of how that should work,” said Eischens.

“The biggest challenge facing everyone in the material handling industry right now is raw material cost. For the manufacturers struggling to contain cost to build their cranes and for the end users trying to budget and purchase. Costs are continually rising and no one has a real firm grip on it.” 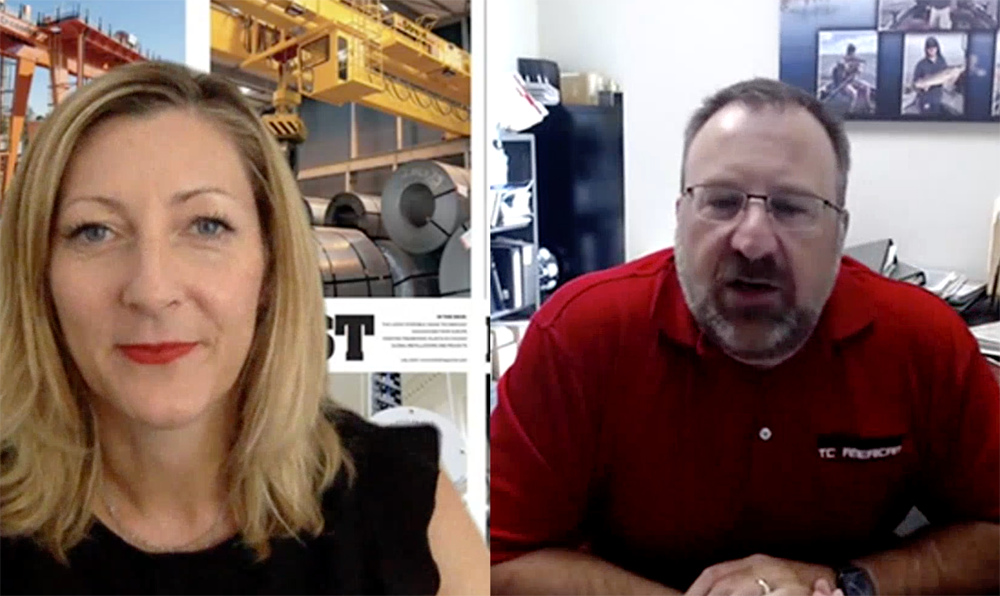