Demag has partnered with Mecklenburger Bauelemente, a subsidiary of Rodenberg Türsysteme, for the construction of its new coating facility for aluminium components.

The door panel manufacturer chose to combine an automatic conveyor line and a manual preparation process, with a suspension crane system, which is equipped with double chain hoists that can be controlled in parallel.

The plant, operated by the subsidiary in Cramonshagen near Schwerin is the most northerly of the company’s four German production locations. Elements for door panels, such as frames, semi-finished products and panel sections are made of aluminium in the complex, which was opened in 1992.

Due to a rise in the volume of orders, the existing coating facility was operating 24/6 at full capacity for some time. To ease the burden and to create additional capacities, the owner planned to build a second coating bay. A new building was erected at the site and the complex facility was put into operation within nine months.

All steps in the coating process, from preparation to surface treatment, are performed in the bay, which covers an area of 1,600 m². Four spray booths that are used to apply the coloured powder and the curing ovens are connected to each other by an automatically operated power-and-free system, which was designed and installed by the Sapp Anlagenbau engineering company from Eslohe. Upstream of the production area is an order-preparation zone that has 10 immersion baths. In this area, the company deliberately opted for manual processes as the lead-in to the subsequent automated operations.

“At our location, all parts are scheduled and produced according to customer specifications: from small applications of 10cm² in size to panels measuring 1.5 by three metres. We want to suspend the material as it comes and not first have to sort it by size,” said Michael Kock, production manager, Mecklenburger Bauelemente.

In a purely automatic system, the intervals would first have to be set for each batch to control the speed at which the elements are immersed, and the pre-treatment process would be different each time. “For this reason, we decided in favour of a manual pre-treatment zone and manually controlled cranes to serve the baths. We were also encouraged by our experience with our existing facility, which has served us reliably for 17 years,” he added.

The production process in Cramonshagen is designed for high flexibility. The parts are supplied to the preparation bay to order direct from the neighbouring production bays, their barcodes are scanned and then they are attached by hand to one of the 60 trolleys on the power-and-free system.

“The incoming elements – regardless of their size – are added to order direct to the production process for surface treatment. They are quickly processed and then return to the production sequence for final assembly,” said Kock.

A double rail system from the KBK crane construction kit with travelling hoist units from Demag was installed for handling the parts. The modular design of the KBK system enabled the installation to be adapted to match the exact requirements of the application. The system was suspended from the building superstructure using dedicated system suspension fittings. A 35 metre long crane runway made of KBK II-R profile sections spans the pick-up area, the baths and the transfer station to the other material handling equipment. The use of profile sections with integrated conductor lines for the tracks keeps the power supply lines protected within the profile sections, which eliminates the need for any cables along the track.

The double-rail track is equipped with three identical low-headroom crabs, which each feature two LDC-Pro-D double chain hoists – for a load capacity of 125kg on each hook. Each double chain hoist has mechanically synchronised chain lead-offs, which allow loads to be precisely handled on spreader beams. This engineering solution results in a longer chain service life, since no additional chain return sprockets are needed. The two-speed chain hoists operate with lifting speeds of 4 and 16 m/min, which can be used for carefully positioning loads and quickly handling spreader beams.

Due to the high demands within each shift, the chain hoists are rated according to FEM group 4m. For lasting protection, the hoist units already have high-quality corrosion protection with powder coating as standard. Exact positioning of the crabs on the track is performed by RF 125 friction wheel travel drives with E22-C motors from the modular system, for travel speeds of 7 or 27 m/min. The handling sequence is as follows: an operator moves the first crab with a spreader beam suspended from four hooks until it is exactly located at the end of the conveyor line and, in this way, completes the conveyor circuit. Three trolleys fitted with aluminium elements can then be transferred to the spreader beam and positioned next to each other.

The worker then lifts the spreader beam out of the track, drives the crab until it is positioned above one of the de-greasing baths and then lowers the load into it. Once the immersion process starts, the crab is then ready for the next handling operation at one of the ten individual baths, in which the aluminium products are pickled, cleaned and prepared for the subsequent coat of paint. When the specified time for the parts in the immersion bath has elapsed, the spreader beam is lifted out of the bath. A switch can be used to select individual hoists that have two chain lead-offs and the spreader beam can then be moved into an inclined position.

“This part of the operation is very important for fast handling,” says Kock. “By using the hoists to achieve an inclined position, we can drain the fluid more quickly before the products are transferred to the next bath.”

The two double chain hoists are controlled with a wire-connected DST 7 control pendant, which is suspended from an arm and can be used in an ergonomic position on the walkway arranged along the baths. The single or tandem operating modes can be set by a selector switch. The tandem function ensures that the four chain lead-offs are precisely positioned when the hoists are operated together.

If one of the chain hoists comes to an unexpected stop – e.g. if a limit switch is tripped – the second hoist is stopped immediately. Following the last immersion bath, the third crab picks up the spreader beam and then returns it to the conveyor line – in the same way as for the pick-up station. From this point, the components are transferred to the automatic conveyor line and are finally given the paint finish as specified by the customer.

“After we ramped up our installation, we had expected a throughput of 40 to 60 trolleys per hour – depending on the individual sizes,” addded Kock. “With a blend of automatic processes and manual handling, we already achieved this target after only a short time. The crane system used for handling the components has played an important role in enabling us to achieve our goals in terms of flexibility and quality.” 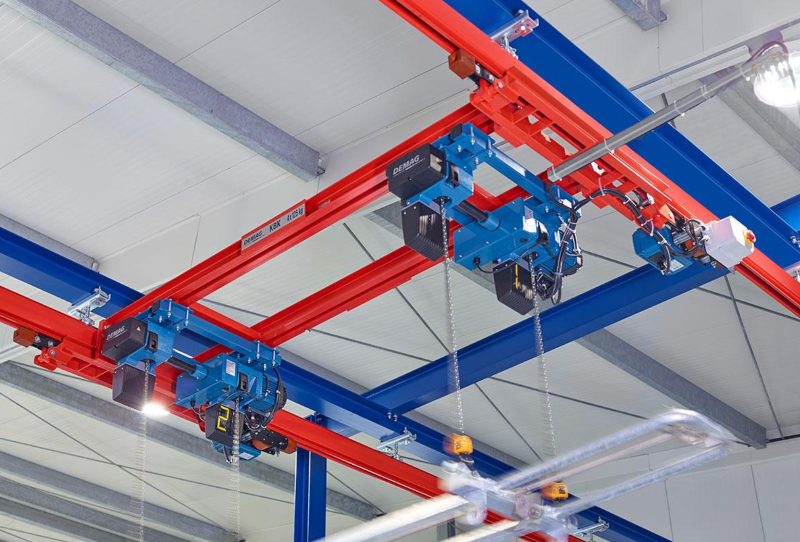 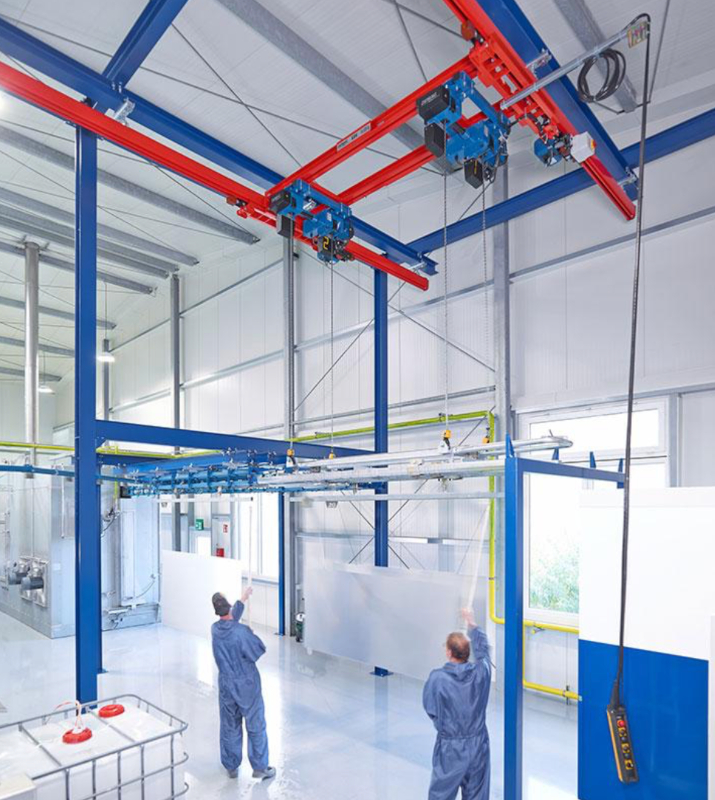 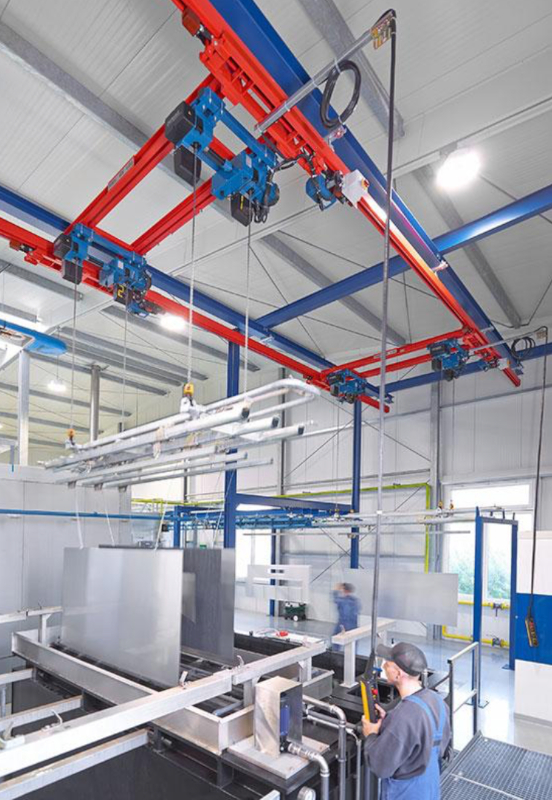 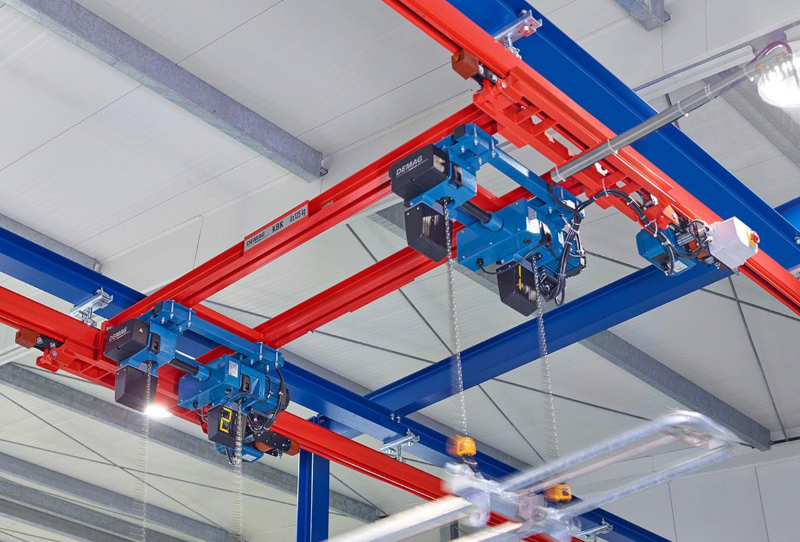