Demag has installed a KBK Aluline system comprising 127 bridge cranes and other hoists at a VW plant in Września, Poland.

The plant, which manufactures the latest generation of its VW Crafter is built on a property covering 220 hectares, and is the Volkswagen Group’s 121st factory. It is designed for an annual capacity of 100,000 light commercial vehicles and has generous workshops for the body line and vehicle assembly as well as a state-of-the-art paint line.

On vehicles such as the Crafter, everything is slightly heavier and larger than on a car production line. For this reason, the handling of parts plays a much larger role. Since commercial vehicles are usually made in lower quantities than for car volume models, but in larger numbers of variants, many steps in production cannot be fully automated.

The Demag technicians installed more than 6,000 metres of profile-section rails for cranes and crane runways. In total, they installed 127 crane bridges for single and double-girder suspension cranes as well as a variety of hoists, manipulators (equipped with lifting columns, pivot arms and balancers) and tools.

For its hoist unit needs, Volkswagen chose the DC range of chain hoists, which are rated for load capacities between 125kg and 315kg and are used with two speeds or variable-speed control, depending on the application. The combination of Demag hoist units and Demag rail systems has already proved to be a good solution at other Volkswagen plants, which is why they are also used in Wrzesnia.

A few examples underline the range of possible applications for the KBK Aluline system in the Crafter production line. Vehicle bodies are transported by a conveyor system at continuous speeds through production. At one station, the cab and sliding doors are removed for pre-assembly on the door pre-assembly line. The 30kg batteries are also installed here. To do this, the worker uses a single-sided manipulator that has an operating range from 0 to 4,500 mm.

Manipulators that are each suspended from two rails are also used to remove the large doors, which weigh up to 85kg. Rails measuring a total length of 238 metres were installed at this station.

In the drive pre-assembly line, the rails are mainly used to provide workers with the necessary tools, such as pneumatic power screwdrivers. Heavy or large components need to be handled on the bench seat and load compartment base panel assembly line, while often heavy, but compact parts such as leaf springs and shock absorbers have to be precisely positioned on the vehicle assembly line.

Every step of the process has different handling requirements. The same applies for different height levels and the type of suspension: if they are needed for the horizontal mobility of conventional crane installations that are equipped with chain hoists, suspensions that have articulated joints are used. Rugged ergo suspensions that can accommodate torque and kick-up forces are used for applications with handling equipment and telescoping power screwdrivers.

Volkswagen chose Demag KBK Aluline system to be used throughout the assembly operation because besides its ergonomic aspects, the planners placed great emphasis on safety and serviceability. In addition, the easily assembled and versatile modular system can be extended or converted so the processes and material flow can be modified at any time. 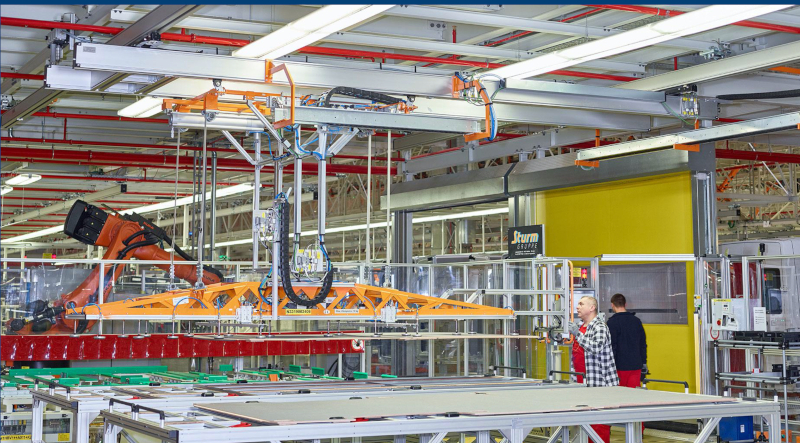