Condra has partnered with Consulmet to design an overhead crane and gantry to overcome delivery and functionality constraints, for a mine in Angola.

The contract was awarded to Condra following a bid for tender and was manufactured in South Africa.

There were two challenges. First, the mine needed to be able to position the crane over three milling and screening areas which will be constructed in phases and serviced by multiple conveyors on either side. Second, the nature of access roads to the site dictated that the 28-metre-span crane be disassembled into 12-metre containers.

Unsuccessful tenders put forward a variety of designs based on portal crane configurations limited to the first mill only. These would have been unable to service future units because of conveyors interrupting the portal rail route.

By contrast, Condra’s solution proposed a double-girder overhead crane running along an extendable crane gantry erected initially over just the first milling area. The gantry’s legs will be sited between the conveyors to allow uninterrupted crane movement over them. The gantry will later be extended to allow the crane to service additional milling areas as and when they are built.

Road transport limitations were overcome by designing the 26-metre-long overhead crane girders to be spliced in two places, and by reducing gantry leg height to match the 12-metre length of the flatbed transports. Additional completed gantry height will be achieved by concrete plinths cast as part of the milling area foundation, and by steel pedestals incorporating the crane’s end-carriages fastened below the crane girders.

Effective lifting height after commissioning will be 16 metres.

Consulmet’s 50-ton crane and 29-metre-long gantry will first assist with milling area construction before its role moves to plant maintenance.

Condra will draw on several decades of spliced girder experience during the manufactured of this crane, which is a scaled-down replica of an 80-ton machine installed at a Rustenburg mine.

Each 26-metre box girder will be delivered in three sections manufactured with built-in camber, then spliced on site in two places ahead of installation. At the splices, steel plates welded to the four inside faces of the male section will deliver a friction grip to reinforce girder strength and integrity beyond that delivered by the splice bolts alone. Bolt holes will be reamed and the bolts themselves machined for an exact fit that will retain camber after assembly.

“This proves once again that a bespoke, designed-for-purpose approach to the customer’s requirements will usually carry the day,” said Marc Kleiner, MD, Condra. “It would have saved the customer money to manufacture girders integrally, but road routes to some African mines continue to present obstacles to the steerable dollies needed for delivery. In this case, no crane component will exceed the stipulated twelve-metre load length of the five semi-trailer trucks that will carry everything to site.”

To be operated in the open air, the 50-ton box girders are sufficiently large to need Condra’s patented storm brakes against wind loading. Anemometers will activate these safety devices in two stages, first sounding a siren at a wind speed of 50 km/h, then automatically engaging the storm brakes at a wind speed of 70 km/h, overriding crane operation and securing the machines against further movement.

Weather covers will protect all motors, and the crane will feature frequency drives throughout. Both of the crane’s 26-metre-span box girders will be fitted with full-length walkways. Crane control will be by radio remote with pendant back-up.

Delivery of Consulmet’s 50-ton overhead crane is scheduled for the end of June. 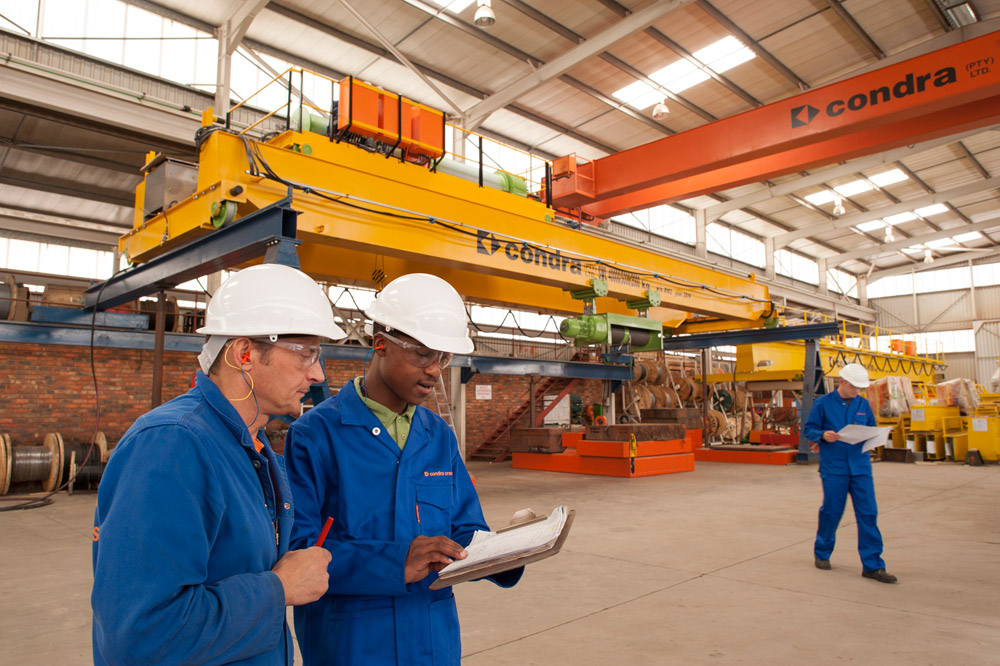