Load monitoring can be split into two main areas: overload protection and remote monitoring. Almost every crane will be fitted with one, if not both, systems which can be used to enhance safety and productivity. Simon Hastelow reports.

The most straightforward form of load monitoring is overload protection. Simply put, a 5t hoist will be fitted with a 5t overload device and no matter what the operator does the hoist will not operate with a load above 5t. All new cranes will be fitted with an overload device, relevant to its lifting capacity, as standard. There may still be some older cranes still in operation without them but companies can easily retrofit a suitable unit onto existing equipment.

The overload protection device is fitted to the wire rope on the drum side and is set to the relevant lift limit figure. It does not monitor any other characteristics of a lift such as whether a load is balanced, it simply measures the load on the hook. However it is possible on some overload protection devices to adjust the load limit and set it slightly higher than the actual lift capacity to accommodate for those instances where a swaying load can give a false reading, for instance.

“We refer to this as Hoist Overload Protection which has become a growth area. The most basic are the overload devices, which prevent a lift from exceeding the pre-set limits for any hoist or crane. The Health and Safety regulations in the UK and Ireland are learning more about cranes and overload equipment all the time and H&S are asking about overload protection more and more. It is purely safety driven,” says Patrick Doyle, managing director of W.H. Scott & Son.

“Overload protection devices can be either mechanical or electrical. They can also be very basic, taking just an hour or so to fit, or they can be very sophisticated giving accurate read-outs and record other parameters such as lifecycles of the crane. We fitted an electrical system recently to a waste treatment plant, connected to a PCB board in a weighing house. So every time they lifted a load it recorded it on their computer system.”

Production companies such as steel plants that operate furnaces and the aeronautical and automotive sectors prefer load monitoring systems with very accurate visual displays in addition recording of lifts and load weights. Systems in these facilities that require an instant response from the operator to an overload situation can also be linked to a siren and flashing lights if a lift is attempted that is too heavy.

Lest safety-critical installations may only require systems that just have a simple LED read-out on the crane itself showing the load weight at that time it is being lifted or picked. These can often still record the data to be used or analysed later but they are much more simple solutions.

“It is a great area for development, particularly in production areas, where operators need to know the weight before they start the lift, so they might have the overload device as well as the on-screen monitoring,” adds Doyle.

Load monitoring can also be used where a lift requires multiple hoists and balancing the load becomes a critical issue, says Doyle: “We recently completed an installation for pre-cast concrete specialists, Shay Murtagh in Ireland, where it needs to lift and turn massive concrete moulds.

The company uses two 100t overhead cranes and needed to lift a mould weighing 196t, which was obviously right at the limit of what could be safely carried out. The operators need to know the exact load on each crane before and during the lift, so we fitted a display to both cranes. As soon as they start to lift they can see each crane’s load, if one appears to be taking more of the load it can be slackened off and the other picks up a bit more to even out the lift perfectly between both cranes while the moulds are being turned.

“It is unusual to see companies fitting remote load monitoring systems coupled to an in-cab display, which can cost around £2,000 to anything in the 1t–5t capacity range; the returns are limited compared to the costs involved. Once you get into the 10t, 20t, 50t or 100t range then the additional cost is really irrelevant. They might already be spending in excess of £200,000 so the extra for the load monitoring system is negligible. We now include a load monitoring option on every single crane quotation we create and heavily promote the benefits of these facilities to the customers,” concludes Doyle.

Remote monitoring of lifts has become the de facto standard for many industries. Not only does it further improve safety and productivity, being able to maximise every lift, but it further logs and monitors the life-cycles of cranes including operating hours which can influence maintenance schedules.

“More a more clients now want to not only view the load but also log it and access remotely from time to time. We can accommodate this with both our TW-3.0-T hand held display logging, and then customising to include other modules which allow remote viewing access from anywhere in the world via a web portal,” says Martin Halford, managing director for DLM UK.

“We stock both Telemetry Tensile Load Links TL-3.0 and Telemetry Shackle Load Cells TS-3.0 which can be used to measure tensile loads on gantries and overhead cranes. These can be used below the hook to measure the load on gantry cranes.

“DLM’s wireless running line monitors are used in crane winch lines to sit on the winch wire in situ and measure the line tension. In both instances the DLM devices can be transmitted back to a TW-3.0-T-S display, which has the ability to output via a RS232 port or any analogue-out port which is able to feed into the crane’s control system.

This enables the load to be monitored and the crane safely operated, indicating and preventing overload situations.

“Our new TW-3.0 product range is currently the most advanced hand-held display on the market and can be paired with any of our wireless load cells marked with a d+ logo. The range allows for an 800m wireless range with a frequency hopping protocol, making it suitable for use in high noise environments and very reliable. It also boasts an in-built alarm feature, overload count, USB data logging against time when plugged a micro USB into the base, ability to communicate with 12 load cells and having our maths channels, RS232 and analogue retransmission.

“The latest development to this product range will be a USB dongle which will be able to plugged into a laptop or PC in order to receive the load cell signal directly and then display the load values on a selection of DLM developed software. With an in-built Bluetooth module it will also be further developed to link to a smart phone.

“Displays can be paired to one load cell, so multiple people in different locations can read or log the load readings or connect the hand-held display to a PC. We have also developed custom load monitoring systems which enable users in remote locations to dial into the system using a web portal and access real time information on what is happening on the crane, while also having access to data logs stored against time.” concludes Halford.

Aberdeen based JCM Load Monitoring stocks a wide range of radio load links, shackles and weighing systems. The company supplies new products worldwide, mainly to the oil and off-shore sector, with an added emphasis on rental and service for more local companies serving the off-shore business in Scotland.

“We have upgraded the radio package with our ALRS2 system which brings new features to the market giving the operator access to more reliable measurement,” says Yvonne Stewart, general manager of JCM Load Monitoring. “The ALRS2 has a large, easy to view display which gives constant display of both actual and peak loads.”

JCM is also able to supply fixed monitoring systems to overhead cranes if required, linked to either its ALRS2 handheld monitoring unit or via data link into PC. “New applications are being identified and solutions being found for customers on an ongoing basis,” concludes Stewart.

The digital approach has also been applied to load links—which have holes for shackles top and bottom and are generally positioned between the hook and the load—although conventional systems are also still used. “Strain gauges inside respond to the strain on the housing and send signals to a read-out instrument, by wired or by wireless link, to tell how great the load is. We can make them to 500t capacity or even larger. They have very good accuracy, to within 0.15%. They are made in aluminium for lightness,” says Marie Samuelsson, CEO at Gigasense, which manufactures load links as part of its product portfolio. A few kilogrammes saving on a lift of several tons may seem insignificant; but as she say, “if it is lifted many times a day even 30kg adds an appreciable load to the day’s total lift.

“Our wireless link versions send by radio at 2.4 gHz. Wired links are less and less used; it seems that companies have ceased to consider it or be aware of it, but still the technology is good and tried and tested, and it is still valid for many applications. So we make wired links also.”

The same refreshing attitude to pre-digital technology that still works is apparent in another Gigasense product, which may now be unique. “Harbours, docksides, railway freight and container terminals and the like where goods are transferred from one means of transport to another always need to weigh what is being loaded,” says Samuelsson.

Crane weighers are used to do it. Most are digital, and Gigasense did indeed make digital crane weighers in the past. “But we have discontinued them now because China can make anything digital considerably cheaper. But we still manufacture our mechanical analogue crane weighers.” And there remains a demand for them, she says. It is small, possibly niche; Samuelsson estimates that it has around 1% of the market share.

“But people still buy some every year; and China still cannot match the solidity and robustness of the mechanical version.”

Again, they are mounted between hook and load. Read-out is analogue, not digital: a needle points to a number on a circular scale. They work by deformation of spring washers. Conical spring washers, also known as Belleville washers, are a design known to engineers to be robust and almost entirely free from wear in operation.

“They have lifetime of millions of cycles,” says Samuelsson. “The complete product is pressure tight, to IP 67 standard, so no water or dust can get inside the casing.” The product can withstand severe conditions, shocks, and rapid unloadings such as in destructive testing applications, where it is particularly useful because under sudden decelerations its needle remains pointing at the maximum load sustained. 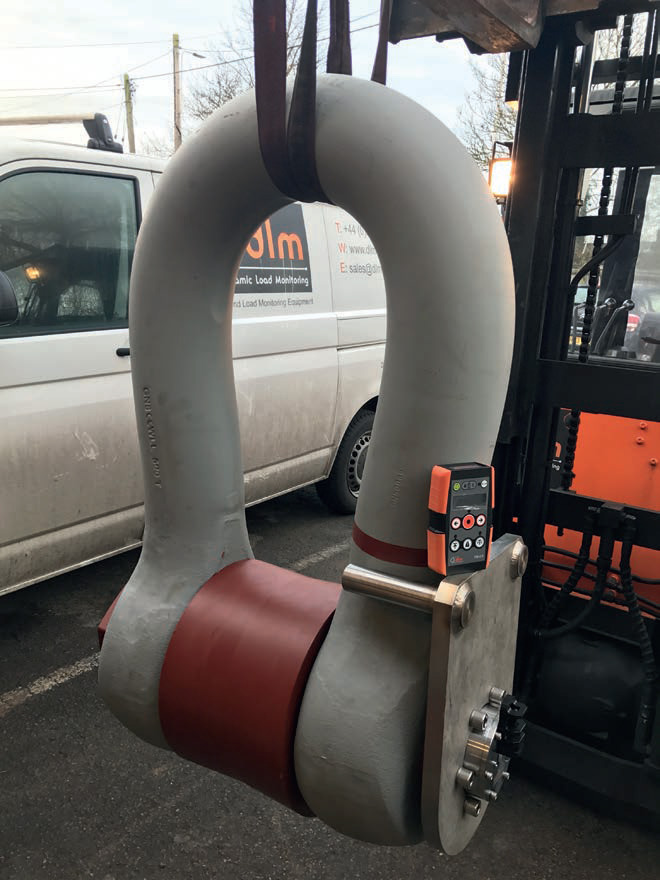 DLM’s telemetry shackle is a marine-grade wireless load cell with a stainless steel load pin that can be used with one or multiple tw-3.0-t hand-held displays to show the load. 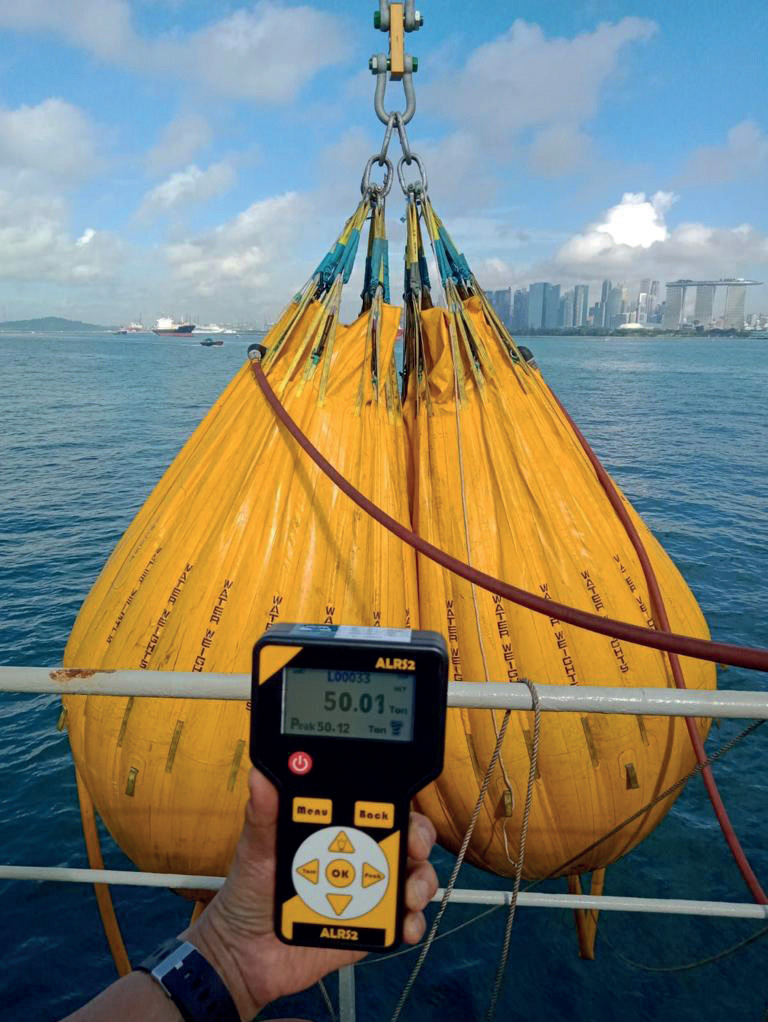 Water bags can be used to load-test cranes, such as with this system from JCM Load Monitoring. 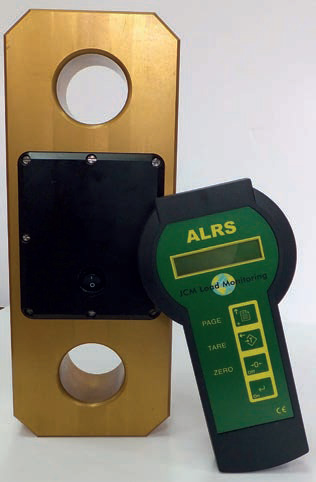 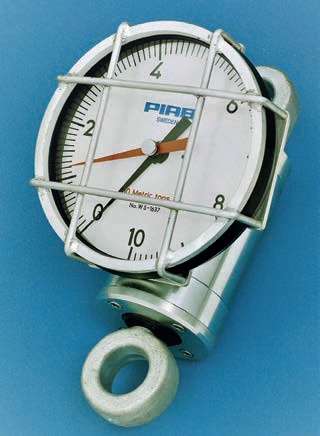 A wireless load link from Gigasense 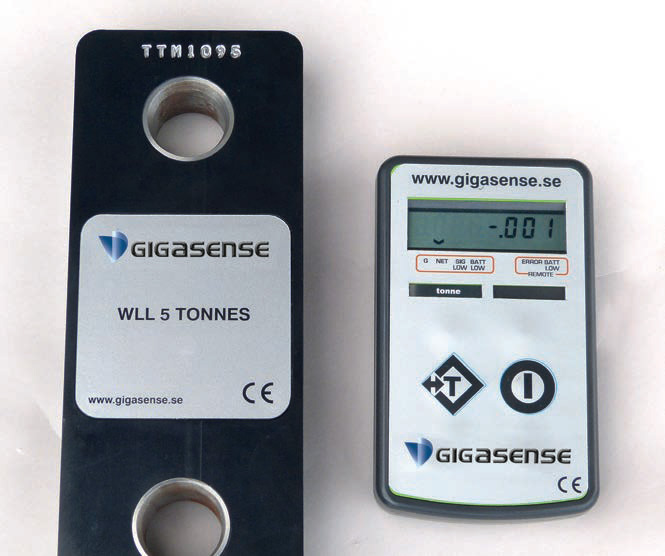 Gigasense’s analogue crane weighers are favoured by users due to their solidity and robustness. 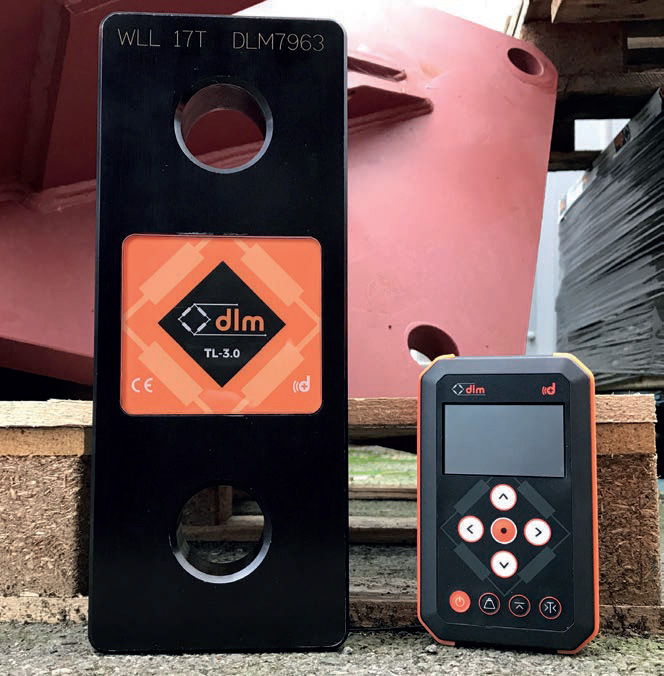 DLM’s TL-3.0 telemetry tensile link load cell is a wireless tension measuring unit with a range up to 800m which can be paired with multiple telemetry handheld displays.