Franklin Offshore Group is celebrating after scoring a hattrick Guinness World Records attempt by partnering with Heerema Marine Contractors (HMC), which works in the offshore oil and gas and renewables industry, to carry out the World’s heaviest jacket lift from a barge weighing 12,050 tons.

The lift was completed this summer offshore at the Equinor’s Johan Sverdrup P2 development project, where Franklin Offshore supplied two Merlion King Cobra cable-laid Grommet Slings for the world’s largest crane vessel – the 119,000 tonne ‘Sleipner’, undertaken in strict compliance with ‘Guidance on the manufacture and safe use of cable-laid slings and grommets,’ IMCA LR 008/M 170 Rev 1.1.

Johan Sverdrup is the biggest field development on the Norwegian continental shelf since the 1980s. Phase two of the development, with planned start-up in Q4 2022, will increase field production from 535,000 barrels of oil per day. The processing platform, which will be the second of its kind at the field center, will make for a total of five platforms when the development is completed next year.

Franklin Offshore Europe has been a supplier to HMC in the Netherlands for over 30 years and the project took six months from start to finish.

The “King Cobra” slings were manufactured in Rotterdam and have been certified as the world’s largest cable-laid grommet sling by rope diameter – 462mm – and have the world’s highest Calculated Grommet Breaking Load (CGBL) at 17,484 tons. That calculation is derived from the Minimum Breaking Load (MBL) of the constituent ropes: 12 ropes at 1,550 tons each, then multiplied by 94%.

The inshore mating of the P2 topside included integrating three modules weighing 13,500 metric tons, 5,400 metric tons, and 4,300 metric tons. The successful operation was the result of close cooperation between Heerema, client Aibel, and operator Equinor. The modules were built in Thailand, Spain, and Norway and are Aibel’s largest project ever. Now that the lifting operations are complete, the topside has been towed by Heerema’s Kolga to Aibel’s yard in Haugesund.

On behalf of the client Equinor, Sleipnir lifted the 12,050-metric ton P2 jacket, which is the heaviest jacket in the world so far to be lifted directly from a transportation barge. The installation method made it possible to reduce the jacket weight considerably, compared to a more traditional launch jacket, resulting in significant fabrication cost savings.

“We are proud to play a part in Equinor’s Johan Sverdrup P2 development, and to achieve two new lifting records in the process is always special. Both projects were successful due to the close cooperation with our clients, and we look forward to returning to the Johan Sverdrup field later this year,” said Michel Hendriks, transport and installation director, HMC.

Before the claim could be sent to the Guinness World Records offices Franklin Offshore invited three independent witnesses to review, check and confirm three vital measurements – the cable-laid rope diameter; the calculated grommet breaking load; and the length of the sling (56,169m).

“Compliance on the sling, manufactured to IMCA guidelines, ensures a high quality safe sling produced to a historical trusted formula for safe lifting. The principal challenges the Franklin team incurred, apart from those that were Covid-19 related, concerned the huge area in terms of length and height they needed for manufacturing the matched set of slings,” said David Glennie, general manager, Franklin Offshore Europe.

“Success was all about accurate calculation – that in its turn determines time and cost. Each unit rope was 867m with a combined weight of rope and reel of 90 tons. The unit rope Minimum Breaking Load exceeds 1,550 ton.

“The sling handling was carried out in a safe manner with our 200 ton capacity multi wheeler.

“The Franklin Offshore Group can rightly call themselves record breakers, as we have secured not one, not two, but three Guinness World Records. The Merlion King Cobra cable-laid grommet sling (Sling identification number: SL 8635) is our largest yet.

“Each unit rope was 867m with a combined weight of rope and reel of 90 tons. The unit rope minimum breaking load exceeds 1,550 tons. It is now acknowledged as the world’s largest cable-laid grommet sling by rope diameter at 462mm; and has the world’s highest Calculated Grommet Breaking Load (CGBL) for a grommet sling at 17,484 tons (based on the Minimum Braking Load (MBL) of the unit rope: 1,550 tons x 12 x 0.94).

In 1992 Franklin Offshore International (Singapore), at the group’s headquarters, started the Guinness World Records ball rolling with the largest cable-laid rope, with a 22inch diameter and a rope breaking strength of 11,000 tons.

In June 2003, Singapore was responsible for yet another record when it produced the world’s longest grommet sling measuring 110m (360.8 ft) long with a diameter of 192mm (7.55 inches) and a calculated grommet breaking load of 3,070 tons. 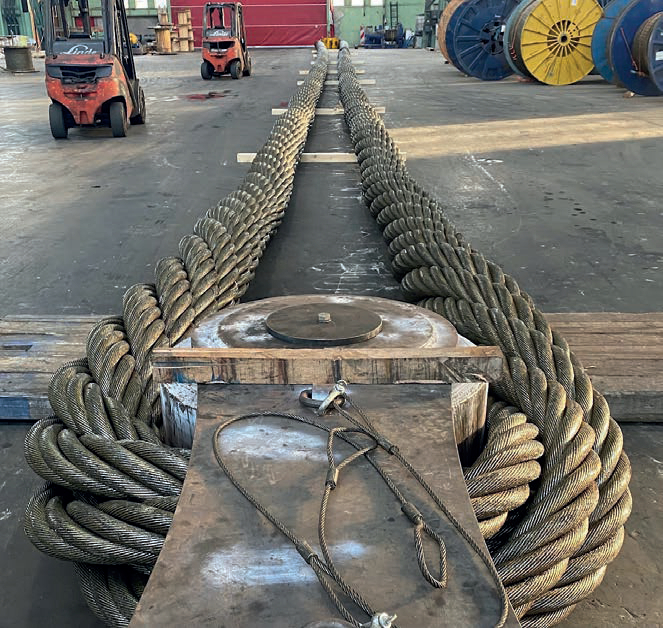