Even before the earthquakes in May, the economy of Italy was in poor shape. Like many European countries, it has been forced to address debt issues by introducing stringent cuts in public spending, sparking a second recession before then first had really ended.

In the words of the OECD, "activity seems likely to continue to decline over the next year but will turn up in late 2013".The OECD predicts a 1.7% decline in GDP this year, followed by a 0.4% fall in 2013, levelling out by the end of next year.

Italy, therefore, is not generally a great place to be in the overhead crane business right now.

However, although sales volumes have taken a hammering, there are still interesting projects to be found, particularly for export-oriented companies, such as Meloni, which has recently worked on projects as diverse as Belgian steel plants, the Cern nuclear research centre in Switzerland and Arianespace's Guyana Space Centre in French Guyana.

Meloni Techno-Handling srl was established in February 2004 as a successor company to the long-standing Meloni SpA. The new company hires all the assets of the old company, including the plant, intellectual property and certifications.

Headquarters are in Tolentino, in central Italy, with a total area of 18,000 square metres and 3,500sq m of covered space. It has more than 100 staff.

A second factory 5km away from the headquarters has a covered area of 2,500sq m.

Within four years its annual turnover had grown from approximately €3.5m to more than €14m by 2008. This sales volume was maintained, more or less, in 2009 and 2010 but fell back to around €12m in 2011. This year's turnover is expected to be about the same as last year's, or perhaps a little more.

The fact that sales have held up this well in the face of a very fragile domestic economy is thanks to the close relations that Meloni has with its customers who operating on a global scale.

Meloni has a high-end customer base, including nuclear companies like Ansaldno and Alstom, steel producers such as ArcelorMittal and Thyssen-Krupp and petrochemical combines such as Technip, Esso, Fina and Snamprogetti. Cement plants and waste-to-energy facilities are also typical customers for Meloni's heavy duty process cranes. Special applications have included rocket launch pads for the European Space Agency, most recently, as mentioned, at Guyana Space Centre - a project previously featured in Hoist.

Meloni does produce some standard cranes, for which it generally purchases hoists from Stahl Italia in Genoa. Its primary focus, however, is special cranes and process equipment, for which it designs and produces its own hoists.

Commercial manager Paolo Moretti says: "We work a lot with EPC [engineering procurement & construction] contractors and about 60% of our work is for supply abroad. For example, we get a lot of orders from GE in Italy, but all of these cranes are for abroad." This means, he says, than Meloni can tap into those markets that are growing, such as Asia and South America.

One of Meloni's larger projects in 2011 was the supply of a special crane to steel producer ArcelorMittal for a plant in Marchienne, near Charleroi, in Belgium. It is the third crane that Meloni has supplied to this plant over the years, but its first to ArcelorMittal. Meloni's association with this plant pre-dates not just Mittal's 2006 acquisition of Arcelor, but also before the 2002 creation of Arcelor, when the plant belonged to what was then Carsid, and was part Italian owned.

The new crane is for ArcelorMittal's MGL (Medium Gauge Line) investment project, a line for processing medium thickness plates of 10mm up to 50mm). This is where steel plate is finished with a high surface quality and precise tolerances on the thickness.

Meloni's crane, rated at 40t SWL (FEM A8/M8) with a 30m span, is used to move the plates between the various stages: from sandblasting and cold milling to quality control and the shipping area.

The steel plates are lifted mostly by vacuum lifters (suction cups) or by magnets. Maximum lifting height is 13m.

The inverter controls offer high speed, high precision stopping and anti-sway performance, while the winch trolley is designed to rotate through 330 degrees to manoeuvre the plates.

"This is typical of the kind of crane that we often supply," says Moretti.

One of Meloni's biggest projects so far this year has been the refurbishment of a 25 year old East German overhead travelling crane at the European Nuclear Research Centre (CERN) in Switzerland.

The 65t SWL double girder crane was built by MAN Takraf and installed in 1987. It is used for handling components of the ALICE (A Large Ion Collider Experiment) project, which seeks to find out what happens to matter when it is heated to 100,000 times the temperature at the centre of the sun; why do protons and neutrons weigh 100 times more than the quarks of which they are made; and whether these quarks can be released from inside the protons and neutrons.

Needless to say, the machinery components being handled by the crane are extremely sensitive, extremely fragile and almost impossibly expensive.

The crane has special strategic importance to CERN since it is the only lifting device operating between the surface hall SX2 and the experimental cavern UX25. In the surface hall, the lifting height is 8m, but the floor of the cavern below is 59.3m down. The crane spans 28.9m and is designed to FEM class 3m.

Meloni won the order in May 2011 and started work on the installation in March 2012. The company had worked at Cern before, but not for about 20 years, so this was a welcome return for the Italians.

Scope of the contract was to replace all electrical components as well as the hoist, trolley and more. "We changed everything except the structure of the bridge," says Paolo Moretti.

To ensure safety and precision control of loads variable frequency drives and a SIL 3 Safety PLC were specified. This was the main technical challenge, Moretti says. The ratio between high and low hoisting speeds on this crane now is 1:100. Maximum hoisting speed is 10m/min, while the slowest speed is a super-careful 0.1m/min.

The crane is operated by infrared remote control from either the hall floor or down in the cavern, with control switched between the two locations. For added safety and security of operations, each control station also has an emergency pendant control.

Moretti says that while Meloni has historically had most of its exports via domestic orders from large Italian engineering companies for their overseas projects, the market is now changing. Meloni is now getting organised to take on more direct exporting, he says.

For projects across Europe, it is not a problem for Meloni to carry out all the work from Italy, he says. But as the company looks further afield - as it must, since few of Europe's economies are much better than Italy's - it is seeking local partners. Potential partnerships are being developed in the USA and in Australia, Moretti says, although these are in their early stages.

Greek tragedy
While most European countries have struggled under the burden of austerity programmes, none has endured as much as Greece, which has had to be bailed out not just once but twice by its neighbours.

Whether or not Greece leaves the eurozone and returns to the drachma has, at time of writing, yet to be determined. In theory, if Greece abandons the euro, it would have to leave the European Union, since there is currently no mechanism for exiting the euro without leaving the EU. In practice, it is likely that a mechanism will be swiftly developed if required.

For the crane and hoist business in Greece, it all seems like a lose/lose scenario.

Mangrinox is the Greek sales representative of Abus of Germany and Kito of Japan. It sells equipment to crane builders and also directly to end users.

"You can say that the market has collapsed," says sales manager Kimon Mangriotis, almost certainly without any note of exaggeration. "A great deal of our partners - crane builders - have closed down their plants as they do not have any jobs."

He says that some crane builders have restructured and are now focusing their efforts on finding work outside of Greece, mainly in the Middle East and North Africa. Some have had some small successes in this.

Speaking before the 17 June election, Mangriotis says Greece's economic future depends on EU policy and the colour of the government that gets in. He surmises that were Greece to leave euro and return to the drachma, "the parity would be at least 50% in our favour and the wages much cheaper". That would be the up side.

Mangriotis trusts that 35 years of successful trading would be enough to ensure that Mangrinox could secure credit to continue importing stock from Germany and Japan, but whether its customers have the ability to pay Mangrinox is something at this stage he can only hope for.

With Greece today, nothing is certain. 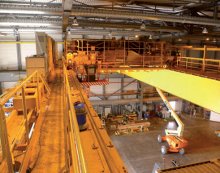 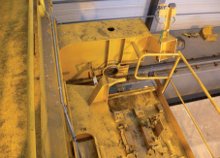 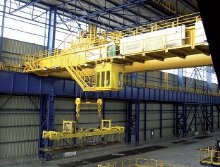 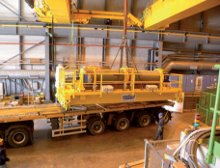 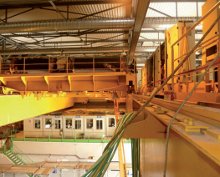 Meloni's cranes in transit to the CERN particle physics laboratory