Christmas is coming, we still hope, but in talking about the state of the lifting market in North America there is a large elephant in the room, and I am not talking about the one that the Republican party uses as its political symbol. Shortages, of components and of finished retail goods, abound. The head of the American Apparel Association urged consumers to do their Christmas shopping in the summer, and the most popular children’s film to download this festive season is likely to be called ‘The Supply Chain Grinch that Stole Christmas.’

Supply chain issues are affecting – one could say dominating – demand, manufacture and the availability of anything retail. This is true worldwide, but it is particularly true in North America. Demand, in the aftermath of Covid, is sky-high: consumers want to consume, as a reaction to a year-and-a-half of social and work-related restrictions. But the container ships that carry those consumer goods, or the components to make them, are anchored – or even drifting, since all anchorages are full – offshore, all along the Californian coast and often for weeks, waiting for unloading slots at West Coast ports. In September, a never-before-seen 73 of them were queuing waiting off at LA Port, the Port of Los Angeles – a number that was exceeded in October, when it reached 80. And LA Port, it is worth noting, handles one-fifth of all cargo that comes into the United States.

Politicians are acutely aware of what this may mean. Also, in October President Biden ordered the port to operate 24/7 in the hope of easing the backlog. It may come as a surprise that it was not already doing that; but North American ports, unlike those in Europe, Africa, Asia or China (where most of the goods in those stranded ships were loaded) shut down at night. As we frequently report in these pages, they have been investing heavily in new and automated lifting and container moving and stacking machinery – (see Box Out); even so, joined-up digital information sharing along the rest of the supply-line, the truckers and railways, is close to non-existent.

So standard practice is for truckdrivers to turn up at a port and wait for their load – waiting time for which they are not paid. (They are paid by the mile driven, not the time taken). They wait now for a great deal longer; their take-home pay has therefore dropped hugely. So they have been quitting the industry; the US is estimated to be short of 80,000 of them.

In effect, therefore, manufacturers and consumers are facing a near-perfect storm. John Lund is vice president, sales and marketing, of Thern. He takes us through all the elements of that storm as they have affected one manufacturer of hoists.

“Thern was fortunate to have strong demand throughout the pandemic but 2021 has shown explosive growth across all market segments,” he says. “Some of our specialities are hoists for the theatre and entertainments sector, for water and wastewater treatment, and for industrial users including bulk material handling, construction, and marine. Demand in all of these sectors has been huge.

“But of course, the supply chain is still extremely challenging and unpredictable.” Nor is it confined to a few raw materials: “Just when one shortage or delay is resolved, another one pops up. Our purchasing and planning departments have been working tirelessly to ensure that any delays of incoming material are minimized. Even so, we anticipate continued disruption into the second quarter of 2022. Labour is also challenging; however Thern has always prided itself in providing competitive wages and benefit packages to our employees, as well as a positive work environment where they can contribute to our mission of helping our customers ‘defy gravity.’ By positioning ourself as an employer of choice in the community, our labour challenges have been minimal compared to others in the manufacturing segment,” he adds.

Despite all those difficulties, Thern has succeed in developing new products and bringing them to market – overseas as well as domestically. “We have recently released a hitch-mounted davit crane base that allows operators to raise and lower loads up to 385kg into and out of the back of work vehicles or lift or retrieve objects from below grade. We have also released a wireless remote control that allows operation of our electrically-driven winches and cranes from distances up to 90 meters. Lastly, we have released two new portable power winches for our European customers. These winches meet all CE requirements and will provide our European customers with additional access to lifting, lowering and positioning solutions from Thern.”

The pandemic has brought changes in manufacturing practices, many of which are proving advantageous – in terms of efficiency and labour use – and therefore most probably here to stay. “There is an overall drive to modernize equipment in manufacturing as well as critical infrastructure,” says Lund. “Winches and cranes are often the ‘hidden heroes’ of the job site, doing their work without fail for decades. We are seeing many operations leaders recognize that replacing their aging material handling devices can improve efficiency and safety within their facility. Today’s electric motors operate at a fraction of the cost of motors from even 20 years ago, saving not only electricity but, with the addition of intelligent controls, saving countless hours of labour as well.” With labour in short supply, hoist manufacturers can help make the labour that is available much more productive.

Something along the same thinking, of adding value through intelligent controls, may have influenced Columbus McKinnon to launch its SPA linear actuator last month. What it is calling its first Intelligent Actuator combines plug-and-play control and feedback with Duff-Norton hardware, Duff-Norton being the Columbus McKinnon brand for motion control technology.

This, the company’s most advanced linear actuator, is designed to provide reliable operation and simplify applications, especially industrial material handling applications. As an intelligent actuator it promises ease of installation, quick configuration, and simple operation to enable automatic systems to get up and running quickly. Among its benefits, says the company, are an increased full load duty cycle, which extends the length of time the actuator can operate, thus increasing production rates. Onboard analog and digital inputs and outputs give the capability for enhanced control and position feedback. There is optional Ethernet/IP connectivity for direct connection to a PLC, providing an infinite number of control options and configurations; and electronic programmable limit switches again provide greater precision, with increased ability to repeat motions compared to mechanical limit switches. Automatic soft starting and smooth ramp-up acceleration prolong the actuator’s life and reduce the stress placed on mechanical components.

All of which is of course deeply digital. Such devices rely on microchips – which again are one of the Asian-made components that we used to take for granted but which now are delayed and in desperately short supply.

An alternative business strategy is not to rely on imported components or materials at all, and to avoid the electrical-components shortage by not using them in your product. Illinois-based HSI make light jib and gantry cranes, NikoRail enclosed monorails, and chain hoists. And thanks to not having to rely on supply chains that start from China, they are able to produce for their existing customers and even for some new ones as well.

“Interestingly enough, domestic supplies are not so bad,” says director of business development Bret Lussow. “I have no problem getting steel. That is because we use US-made steel which we buy directly from the mills; or when we cannot get that we go to supply centres. The steel problem for us is the prices, which are very expensive, double or some cases triple what they were last year. So I’m not saying that things are favourable from the standpoint of pricing but as far as supply is concerned we are really not having a difficult time in getting the steel.

“Manufacturers who use radio remotes, wiring, electrical boards and panels in their products - all of those have big problems right now. But we don’t use those components. 90% of our products are manually powered: you turn a handle on a hand-winch, or you pull or push a light monorail, so we short-circuit that supply issue.

“And demand is quite frankly steaming ahead; it’s amazing right now. Part of it for us is that we are hearing from a lot of dealers that we haven’t heard from in a while, and I think it’s because they need a product to put on their shelves. If their Number One supplier can’t provide product they’re coming to us as an alternative, and so that way we are getting a lot of new customers, which is great; and hopefully a fair number of them will remain with us when all the disruption is over.

“The problem we do face is labour. It is very difficult to find workers right now; it seems as though they don’t exist. I don’t know where that labour pool went. A lot of people have exited the workforce. Maybe they have issues with family or children, or they just can’t work after Covid, but it’s almost impossible to fill a position right now. This is men and women, skilled and unskilled and professional jobs; everything from fabricators and welders to painters and office personnel. It is every position everywhere that is very difficult to fill.

“So yes, it’s a perfect storm, but we are doing what we can and fortunately we are doing pretty well right now.”

The moral, if there is one, is: try to think outside the box. And, especially, outside the supply chain. 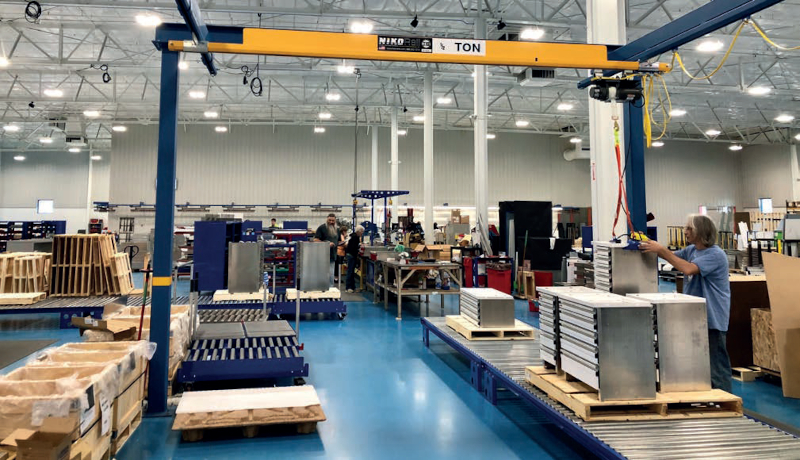 The simple and light NikoRail is a best-seller for HIS 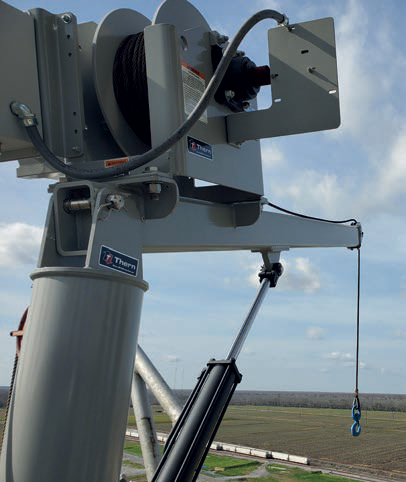 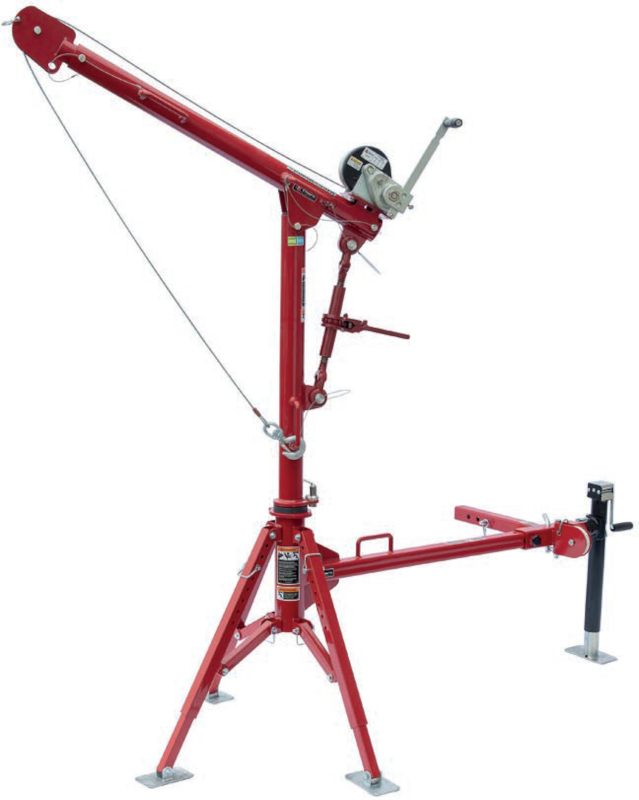 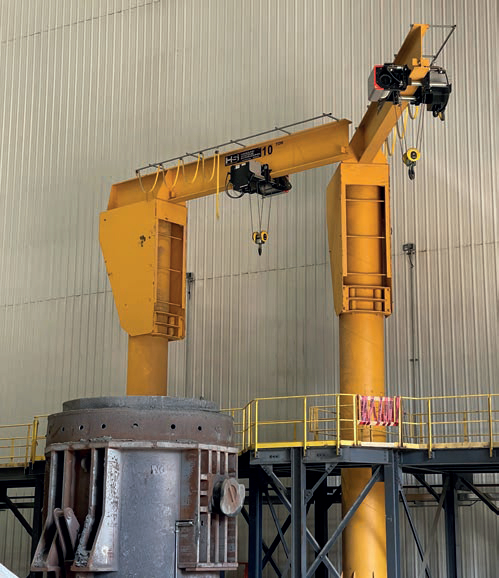 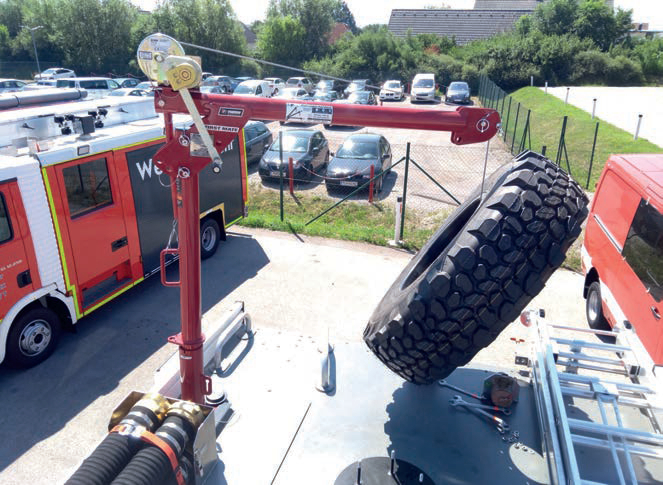 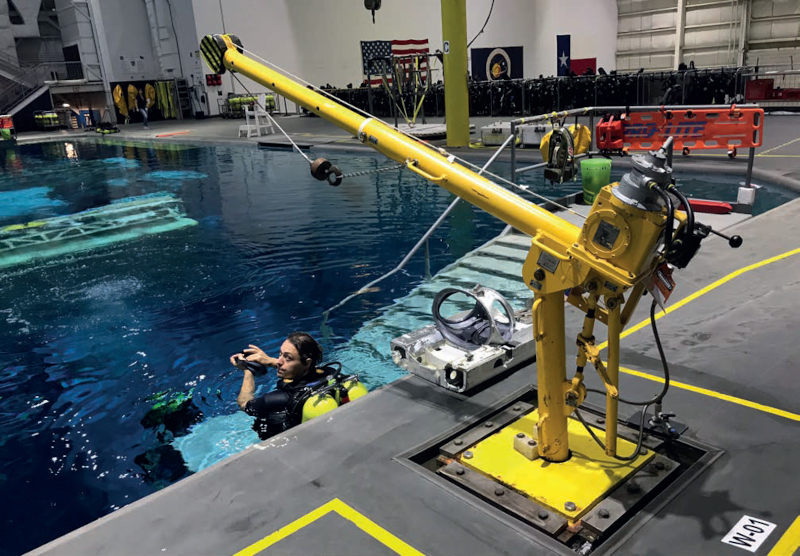