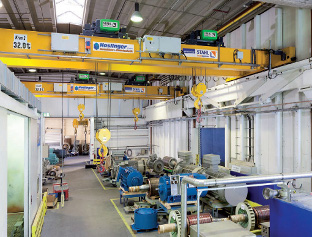 Germany: Tradition and growth in engineering 31 January, 2014 Germany, famous for engineering, is home for many key firms in the hoist and crane market. Adrian Greeman talks to some of them and asks how their business has performed in 2013. > read more

Bogie inspection & manipulation 26 April, 2013 Lloyds Somers, a business specializing in the design and supply of handling and manipulation equipment to the rail industry, has developed its range of Bogie Rotators to accommodate the full fleet of bogies in use throughout the French Rail Network, writes Kizzi Nkwocha.

Leg up for a big lift 22 March, 2013 The temporary support structure played a critical role in replacing a 195 tonne crane at an active nuclear power plant.

Automatic for the ports 29 June, 2012 A year ago, Cargotec asked its personnel to come up with bright ideas for the future of automated lifting in ports, and now the company has started helping its clients prepare for that future.

Home and away 28 June, 2012 While Italy has had a torrid time like many in Europe over the last few years, for hoist manufacturer Misia a change of customer focus has meant steady business.

Prevention is better than cure 08 June, 2009 (FREE) Increasingly wellness programmes
aimed at encouraging healthy lifestyles are being offered by health
insurers but often the question is asked: do they yield any
positive results?

Colour coded 06 March, 2008 Airbus Filton uses 10,000 separate items of loose equipment, many of which leave the site for long periods. Rigging manager Jason Sutton faced a challenge to make sure all of this equipment can be properly tracked. Will North reports

Pull together 05 March, 2008 Gebr. Markewitsch has built a successful business specialising in plant installations. As part of the MultiLift group, it has access to an extensive range of lifting and transport equipment. Will North spoke to joint managing director Robert Markewitsch.