The 13 new cranes installed at the Port of Liverpool this year will help to drive efficiency and future-proof the port’s operations. Keren Fallwell reports.

Peel Ports’ orders for new cranes for the Port of Liverpool in recent years have marked another leap in Liverpool’s return as a primary maritime city.

This year alone, the port has taken delivery of 10 cantilever rail-mounted gantry (CRMG) cranes and three ship-to-shore (STS) cranes from ZPMC as part of the next phase of growth at Liverpool2, the port’s £400m deepwater container terminal on the River Mersey. They join the 12 CRMG and five STS cranes from ZPMC installed in phase one.

In addition, Peel Ports has placed an order for two new Liebherr STS cranes to replace two existing models at the port’s original facility, the Royal Seaforth Container Terminal (T1), which sits in a controlled dock area of the river. The older cranes will be relocated to Peel Ports’ Greenock Ocean Terminal at Clydeport in Scotland.

As well as securing Liverpool’s place on the UK’s maritime map, the new cranes help to future-proof its operations. In 2014 when the port began the tendering process for the first CRMGs and STS cranes for phase one of Liverpool2 it had to increase the draught because shipping company Maersk had just launched the Triple-E, the largest container ship in the world, with a carrying capacity of 18,000 TEU.

“Liverpool2 isn’t constrained by dock gates like T1, and container vessels are getting longer, wider and deeper. We had to make sure the port could accommodate the biggest vessels in the world in 10-15 years’ time and that puts more demand on the structure and design of the cranes,” says Damian Cross, the port’s head of technology and engineering development. “We wanted the cranes to be as automated as possible in order to be efficient, effective and competitive as a UK port, and we need the option to add more technology as the shipping industry advances.”

As a result of investments, the Port of Liverpool is challenging some of the UK’s bigger ports, says Cross, adding that Liverpool2 now has the capacity to unload two 380m vessels simultaneously.

The CRMGs from ZPMC are 35 metres high and each weighs around 500t.

The CRMGs are deemed semi-autonomous as 90% of their functionality is completely automated and, when specifying the cranes, the port wanted the latest cutting-edge technology to scan and accurately control the positioning of the containers.

“Safety is paramount over everything,” says Cross. “The smallest thing we move is a 20ft box that can weigh 30t so we require safe control as well as millimetre accuracy when stacking containers.

“The technology on the crane also needs to self-measure, self-control and self-calibrate and provide all that data so the maintenance teams and operations teams can make decisions and plan works to ensure we are as effective as possible and moving as many boxes every hour as we can.”

Unlike the CRMG cranes, the STS cranes do have a driver but the level of automation included builds in efficiency. “An experienced driver may be able to move 30 or more boxes an hour, whereas a new operator couldn’t, but the crane has functionality that can push their performance to meet that of an experienced driver to maintain efficiency across shifts. We want a vessel to have the fastest turnaround possible; it’s more cost-effective for the customer and efficient for us,” says Cross.

Laser scanners are an important feature on both crane types. On the CRMG cranes, the scanners don’t just check the siting of the container, but also whether it has a gimbal, and they have a similar use on Liverpool2’s STS cranes. “The vessel is out on the river so it’s affected by the tide – which here has a range of about 10m – the swell and the weather. The scanning devices on the STS measure whether the ship is moving around so when the operator is picking up a box it makes the process as efficient as possible,” says Cross.

Energy consumption was also a big consideration. All the cranes have LED lighting and regenerative systems so when they are lowering a container they are sending energy back to the grid.

“We pour a lot of energy consideration into the designs and always look at how we can improve,” says Cross.

Calibration has also evolved. “On phase one of Liverpool2 we had manual calibration. We’ve worked with ABB on automatic calibration for phase two to make maintenance procedures more efficient,” says Cross.

The 10 CRMG cranes were delivered in two stages, with the first five making the 46-day journey from Shanghai in January this year and the remaining five in March. ZPMC’s factory on Changxing Island on the Yangtze River has an 8.5km quay, which enables the company to build the cranes in its yard and erect them on the quay. They were transported fully erect to Liverpool where, at 2am and with port operations halted, they were rolled off the vessel onto rails and rolled into position.

The two new Liebherr STS cranes, which will be ready for operation at T1 early next year, have an outreach and lift height of 40m, a back reach of 18m, a span of 16.785m and a safe working load of 40t under single lift spreader.

Simultaneous motions of all drives and mechanical anti-sway are among the standard features.

“The Liebherr crane design uses high-tensile steel and a lattice boom and beam, resulting in a lighter crane with reduced wheel loads, a key consideration because of the narrow span and quay structure at the Port of Liverpool,” says Liebherr.

The new cranes will be shipped to Liverpool in large preassembled components and assembled on-site at the port. Liebherr says an STS crane is typically erected and commissioned in 12-16 weeks.

The two cranes, which are being relocated to Clydeport are 18 years old and, since they were installed, technology has progressed continually.

“Over the last 20 years, STS cranes have benefited from the incorporation of newer technology and the development of more efficient drives and motors. This results in greater efficiency in container handling and a reduction in energy consumption,” a spokesman for Liebherr reports.

The arrival of the 13 ZPMC cranes this year has been something to celebrate but the Port of Liverpool staff have had little time to pop champagne corks as they are already working on the next big project – Port Salford, the UK’s first tri-modal inland waterway port.

In fact, when Cross spoke to Hoist in early June he and his colleagues were working on the design and specification for a similar crane operation at the new venture.

The development, next to the Manchester Ship Canal, is led by Port of Liverpool’s parent company Peel Ports in partnership with Salford City Council.

The £138m terminal, scheduled to commence operations in 2023, will be served by ship, rail and road and include an inland port, rail link, container terminal facility and 1.5 million sq ft of logistics floor space. It will support 16 trains a day and accommodate 775m-long European trains.

Cross says the new facility will have a crane operation very similar to that at the Port of Liverpool, initially with three CRMGs, and the Salford cranes will be controlled by the port, which is nearly 50 miles away.

“The CRMGs are 90% automated and at the Port of Liverpool the final pick-up and set-down from a vessel is done from the control room. We will do the same thing with Port Salford, but it will be operated from Liverpool,” says Cross.

Although the project is smaller than recent developments at the Port of Liverpool, Cross says it is technically more challenging.

“The IT systems we put in place have to be very robust and high-performance because the cranes communicate with safety protocols with the desk and if they detect any obstructions they shut off, so a lot of work goes into making sure the port operates smoothly but safely,” he says.

The CRMG cranes’ arrival at the Port of Liverpool this year coincided with Liverpool City Region’s successful application for freeport status. The port is the global gateway to the new free-trade zone which will contribute around £850m GVA to the region and create 14,000 jobs.

In addition, Peel Ports Group says the latest investments at the Port of Liverpool, including the 13 cranes delivered this year, mean it is on course to realise plans to achieve 20% of UK container market share by 2025.

“Liverpool 2 is already one of the world’s most modern shipping terminals,” says Peel Ports managing director David Huck. “This recent delivery is testament to this.” 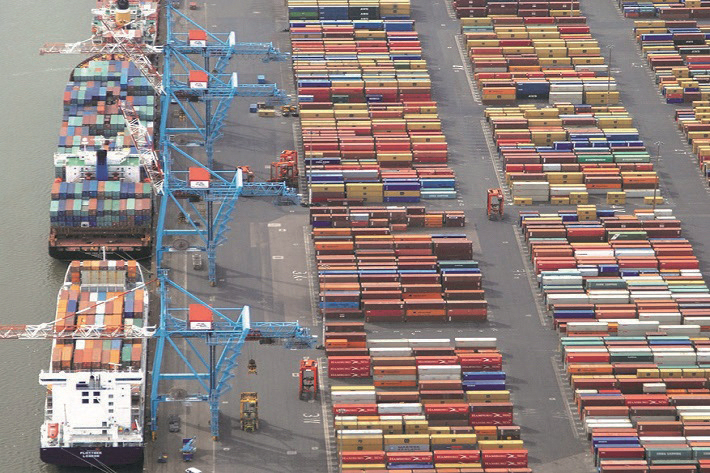 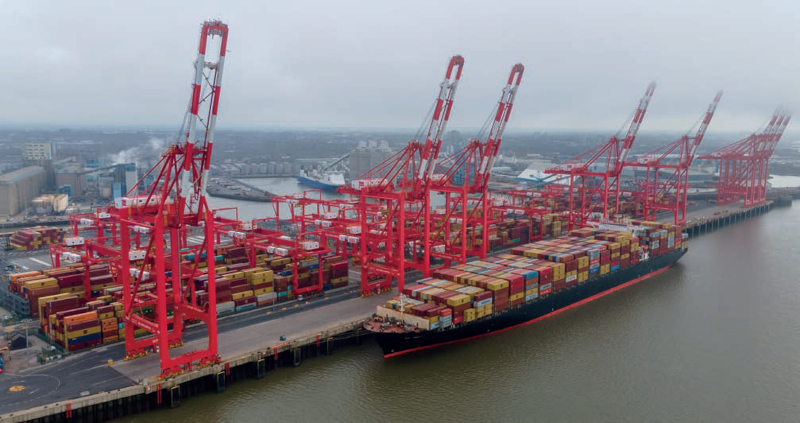 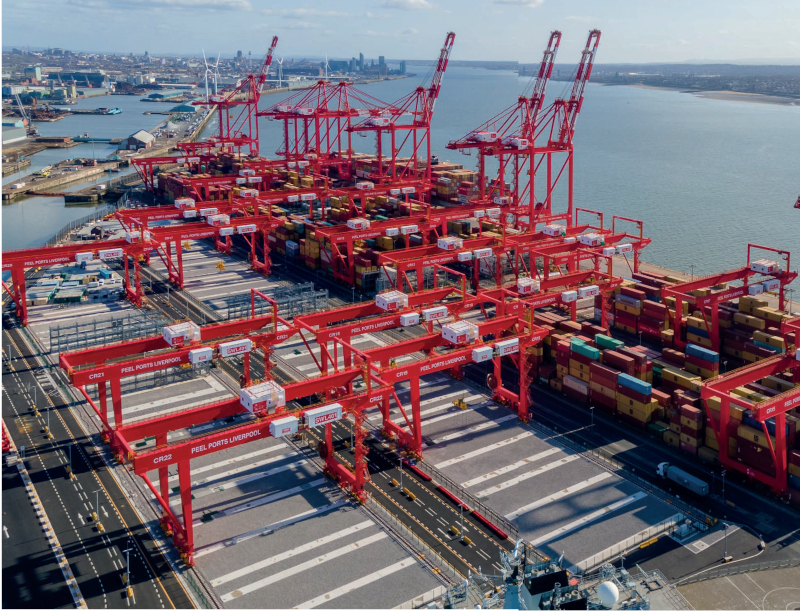 The Port of Liverpool’s deepwater container terminal on the River Mersey, now has a total of 22 CRMG cranes from ZPMC 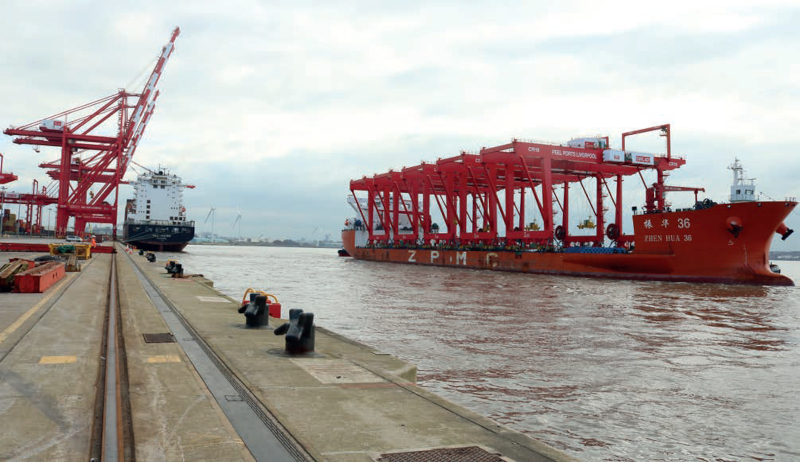 This year the port has taken delivery of 10 CRMG cranes from ZPMC; the first five arrived in January and the second shipment was in March 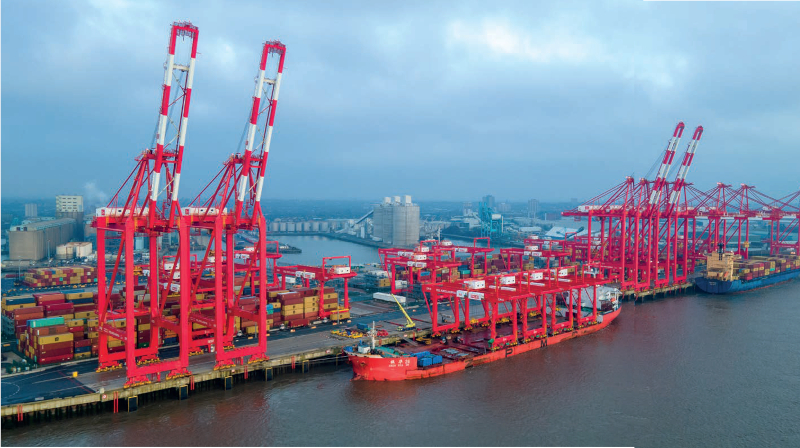