Growth in the automotive and manufacturing markets are expected to boost North America’sindustrial construction sector in the coming years. But as confidence slowly returns to the market, manufacturers are finding that customers are still erring on the side of caution when it comes to committing to significant new investments, finds Tim Sheahan.

While the US invested what can be described as a "modest" sum in its industrial projects in recent years, analysts expect the expansion of the automotive and manufacturing sectors to aid this market's growth in the next 48 months. This has been helped, in part, by improving credit accessibility, low interest rates and also strong order outlooks in the manufacturing sector as confidence in investments slowly begins to return in the marketplace.

As with many parts of the world, industrial construction is one of the key contributors to the North America's GDP. In the US over recent years, a number of factors such as the rate of manufacturing output, industrial production, and a declining GDP have all had a detrimental impact on expansion within the industrial sector but this is picking up.

Recent research from Timetric indicates that industrial construction in North America was worth US $40.1 billion in 2012, increasing its input to the region's whole industrial output from 53.8% in 2008 to 56.3% last year. The sector is also expected to grow at a compound annual growth rate of 4.87% over the next four years, representing an absolute increase of 26.9% over the market's value in 2012.

This is good news for manufacturers operating within the cranes, lifting and handling equipment markets in the US, with annual CAGRs of between 2.5%-4.0% in the next four years. As a whole, this market is anticipated to grow by around 3.04% in the same period.

One manufacturer in this space is gantry crane and mobile gantry crane manufacturer Shuttlelift. Kurt Minten is the director of industrial sales for the US firm, joining the business more than 30 years ago in 1981. According to Minten, the last year has resulted in his firm experiencing its largest single year improvement since 2007, citing successful business expansion as well as a high level of adoption of new business from customers that exist in other markets.

However, Minten believes the health of the US economy isn't quite at the level it was before the recession hit. "As with most companies, the overall economy has not made it back to where it was before the recession. With supplying to a number of different industries, Shuttlelift has been able to take advantage of industries that have been steadily growing when others are not," he says.

Minten adds: "Industries involved in the energy sector have been steadily improving over the past few years and continue to be performing well. The concrete industry has been improving slightly but this has suffered by the overall economy".

And while the purse strings have begun to loosen, Shuttlelift among other companies, have found that some customers have been hesitant to commit to significant investments. Minten says that while Wall Street's performance has been increasing, companies are still being conservative with their money they have to hand.

"With the economy performing so poorly over the last several years, most companies have delayed purchasing capital equipment. Since a number of machine purchases have been postponed, many of their current machines are older and in need of replacement. When customers continue to use these machines, the downtime of their machine increases and the maintenance cost to keep them operational continues to grow substantially," he explains. "What some companies do not see is if you put five years of maintenance costs and the cost of downtime together, how much it can add up. Why not put that money into a new machine that you can depend on for your lifting needs for years to come?"

According to Minten, challenging economic conditions have resulted in companies turning to other means in order to keep their equipment fleets as up to date as possible.

"Many companies have been hiring out their lifting needs by renting cranes and large forklifts. By comparing the rental costs to the purchase price or monthly lease rates for a rubber-tired gantry crane, they are quite surprised by the short time frame on the ROI. The rubber-tired gantry crane is also a quicker, more efficient means to handle materials. Those customers have realized that spending money can quickly lead to saving money," he says.

Paying dividends "Last year, a customer purchased a DB 70 mobile gantry crane who was originally renting cranes. Prior to the purchase, it would take six and a half hours to lift and move one of their tanks. After they purchased our gantry crane, it took them 13 minutes. With the improved productivity, their company will end up saving an enormous amount of time and money with the purchase of a mobile gantry crane."

Earlier this year, Canadian crane manufacturer O'Brien Installations partnered with Rytec Corporation in a deal that will involve O'Brien supplying, installing and servicing the latter's portfolio of high-speed doors. Speaking at the time, O'Brien said the deal will expand the range of industrial doors to include specialised clean room doors as well as high-speed traffic doors.

According to Wayne Davis, vicepresident at O'Brien Installations, the group has experienced a strong showing in 2013, something they expect to continue into 2014 and beyond.

He says: "The plant here in Burlington is still running two full shifts per day and will continue that well into 2014. We have seen growth in a number of areas, namely in the field of overhead cranes, jib cranes and light rail enclosed track, the three core products that make up the bulk of what is produced at our site in Burlington, Ontario." In terms of challenges for a business such as O'Brien Installations, Davis cites the need to stay competitive and secure important contracts and projects to provide the firm visibility.

International installations "We have recently secured several large projects here in Canada. One was in Welland Ontario for four 15-ton capacity double girder top running cranes that are used to produce the blades for wind turbines. Another was in Halifax, Nova Scotia for five explosion proof cranes at a new ammunition storage facility," he explains.

"The two biggest challenges we see for our company is being able to stay competitive in the marketplace against ever increasing competition from the International players in our industry at the same time providing the same high quality product that our customers have come to expect," he adds.

For Shuttlelift, manufacturers are expected to innovate in order to help customers save money but at the same time, improve productivity in their lifting operations especially in challenging economic conditions. According to Minten, manufacturing facilities have, for years, installed overhead bridge cranes in each of their bays to assist with lifting needs but it is limited to that specific bay. To expand capabilities with a minimal increase in budget, he cites gantry cranes such as the manufacturer's SB series, which features a single traversing beam and single hook to transport any load from inside a facility to outside of it without the need for additional handling equipment.

One manufacturer that has been enjoying strong traction in Central America and Canada, especially in its ports across division, is Konecranes. The manufacturer recently outlined the details of a major order from transportation supplier CSX Intermodal Terminals, which comprises four Konecranes RTGs complete with the option for an additional crane if required and two reachstackers .

The cranes will arrive equipped with the firm's latest DGPS-assisted technology for container yards, which includes an autosteering feature that keeps the crane on a pre-programmed straight driving path, which is claimed to improve safety while increasing productivity. Each RTG has a lifting capacity of 50 tons and are capable of stacking one over three containers high. The sale marks the second spend on RTG cranes by CSX Intermodal Terminals in as many years following on from an order placed last June. Thus new spend will involve the installation of three RTGs in Valleyfield, Canada, and one RTG in Chicago before next October.

According to Jost Dammgen, sales manager of port cranes at Konecranes, the deal is the latest step in a positive relationship between both parties. "Close and good cooperation with our customer has paid off and resulted in another important order from them," he explains. "Konecranes' RTGs are equipped with several innovative features that offer significantly increased performance and reliability, and at the same time decreased maintenance costs." 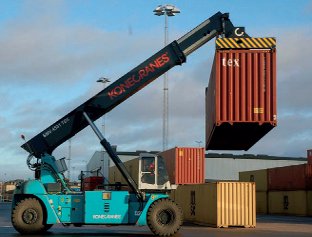 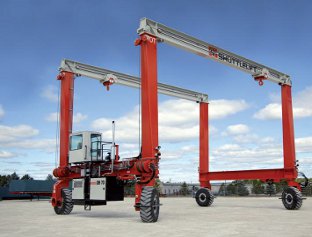