On the road again

As automotive firms from emerging economies continue to grow their footprints across Western markets, new opportunities arise for companies providing reliable, high-tech custom kit. Hoist looks at a crop of recent jobs in the sector.

In the automotive, pharmaceutical, and computer manufacturing industries, the partial automation of industrial processes has been going on since the 1970s. Programmable variable speed drives were first introduced on pneumatic hoists in the 1990s, partially automating hoist travel, and creating the first Intelligent Assist Devices (IADs).

Nowadays the importance of reliable, cutting edge crane technology is not lost on manufacturers of automotive equipment who are more than ever focused on increased productivity with minimal room for downtime through process shortcomings in any form.

Although this is not a typical automotive manufacturing facility, current high demand in Australia for motor graders, excavators, dozers and dump trucks means that whoever can guarantee delivery of largescale orders on time is going to be ahead of the pack. That's a fact not lost on the Japanese manufacturer.

Komatsu's largest investment in Australia to date, the factory consists of six main buildings that include manufacturing, remanufacturing and fabrication facilities.

Requiring a range of high-quality cranes for its workshops, Komatsu brought in Eilbeck, a stalwart of the Australian overhead crane industry for over a century.

As well as the ability to meet Komatsu's needs within a six-month time frame, completing installation during the facility's 16-month construction period, Eilbeck says that another key aspect of the contract win was the ability to provide 24-hour service and maintenance through a team in Darra, Brisbane, based less than 10km away.

Smooth operators
German cranebuilder Eepos specialises in extruded aluminium systems, designed for smooth and quiet running. Sales manager Volkhardt Mücher said, "We have two main products. Our original product, launched in 2006, is a lightweight aluminium rail system. Our second, launched last year, is a telescopic lifting axis. This can be used in where parts need to be handled off of the
centre of gravity, for example on car seats, or for taking forces, like screwdrivers.

"One of our first projects in the automotive sector was for BMW. We'd put on a showcase at another customer's, where we were demonstrating the aluminium rail system. BMW had already given an order for a new axle assembly line at their plant in Dingolfing. They saw our system, and were so impressed by its smooth and silent running that they decided to cancel their existing order for a steel crane system and replace it with one using our aluminium rails.

"Eepos gives all information needed to build the crane system, like drawings and tools, to enybody who wants to use our profiles. So, BMW were able to go to one local supplier the track profiles, and the handling companies for the girders and handling unit.

"That's what customers like: that operators feel it running smoothly, and that it can be built using standard parts. We can supply all the information customers need. Very often, material handling companies choose to integrate Eepos rails into their own complete handling systems."

Demag's two double-girder overhead travelling cranes each feature spans of 32m and will work along a 200m-long crane runway. The 80t crane has a specially developed motor-driven tool gripper that will be used to help Volkswagen optimize the space usage in its parts storage facility. It will enable pressing tools used for constructing car body parts -- some of which weigh up to 65t -- to be stored on three levels in the storage facility rather than on one. To streamline handling, positioning control for independent control of up to 200 storage locations and discharge stations can be programmed into the crane, allowing it to independently manage its approach to each location on the pressing lines.

The second crane, a 70/33t capacity open winch crane with dual hoists on the same crab, will be used to turn tool halves for maintenance work in addition to moving them around. Having designed the crane to have both hoists on the same crab both of which have frequency-regulated drives for infinitely variable hoist speeds, Demag's solution provides precision synchronisation
of hoist movements and counter-motions needed for turning the tool without having to place it on the ground first.

To safeguard against the safety issues automation can introduce in automotive environments, both cranes feature load sway damping systems and integrated optical spacing to prevent them colliding on the same runway, as well as by-pass control which ensures the tools being carried never collide with machines in the room or the hall walls.

"Customers are now becoming more familiar with the servo motions, so we envision a much more complicated field of motion," says Doug Jones, controls manager at Michigan-based Knight Global. "The new features are coming out of the woodwork because we're trying to solve our customer's problems." IADs reduced the numerous control buttons depressed by the operator guiding the hoist, so that they only have to pick up the load by grabbing the handle.

Jones says, "IADs came about primarily because robots encompass a significant amount of floor space. When they are in operation, no one can access this fenced off area. The beauty of IAD's is they allow the operator to work within the same workspace." Since the 1990s, the introduction of servo drives into hoist operations offered fine positioning beyond that offered by variable frequency drives. The servo hoists could position loads to tolerances of 0.0001in, bringing advantages for speed and productivity.Knight's interest in utilising precision programmable movement with lift assists was primarily driven by General Motors. The carmaker wanted to minimise in-plant damage when placing components during assembly. They asked Knight to develop a new kind of electric servo technology combined with a lift assist.

To generate these precision movements with existing pneumatic technologies, the lift assist would be too complex. It would require numerous limit and proximity switches, and that would make it harder to maintain. The initial servo technology for lift assists centred around a hoist mounted on a light bridge. This approach was fine for jobs where the operator was loading in a more-or-less direct overhead motion. If, however, the operator needed to reach into a car, machine or die press, this design was not optimal. Many of the systems existing at that time could slip and create a problem with "return-to-home" positioning and the corresponding maintainability of the system. Because of these issues, Knight developed servo arms for reach, dampening to prevent load swings on cantilevered loads and more intuitive handles, so the operator did not have to be concerned about positioning with control buttons.

"It's not just cars. We are also supplying the new servo-technology for heavy components used in the agricultural and construction equipment markets, which used to be lifted pneumatically. Pneumatics are not optimal when picking heavy weights, because of the wait time to fill and exhaust large cylinders," Jones says.

"One major benefit we have seen is eliminating the manhandling of heavy loads with slings and overhead cranes. The servo systems have created opportunities to reduce fatigue and potential injuries on the factory floor."

Floats like a butterfly
Six years ago Knight Global began developing its servo technology further to offer a three axis, X-Y-Z, float mode. The system connects three servo units together; they communicate with each other, allowing guided motion in any direction.

"The fluidity of motion is the beauty of it. We first installed it six years ago for an automotive industry client, so it has been around a while, but now it's taking off," says Jones. "It was for transmission companies for installing torque converters. We started with the X-Y axis, up and down, before developing the Z axis"

Transmission companies asked Knight to develop a range-limiting option for its servo hoists, to prevent damage to transmission casing. "What we don't want the operator to do is collide the torque converter into the transmission casing, so we have a speed ramp down," says Jones.

Another idea for a heavy equipment manufacturing client included the design of a simple modular link system to make it easy to add different attachments, magnets in that instance, to the hoist hook.

"The client used pneumatic magnets to pick up big 300lb pins. They like to change out the magnets that pick up smaller pins or wider pins, matching the magnet to different size pins," says Jones.

Knight has worked on making its servo hoist parts common and non-proprietary for ease of maintenance. "We thought out the maintenance issues, so we're not using proprietary pieces of equipment so when something goes down the plant can replace the part very quickly."

Looking towards the future of servo hoist automation, Knight predicts customers will see more custom electronic end effectors that will allow totally automated rotating of loads. Now once certain zones are achieved, a particular motion can be initiated without the operator activating any buttons.

"With the increase in flexible assembly lines and finetuning all motions to achieve peak efficiencies now what we're seeing is that clients want to use programmable motion within the end effector." 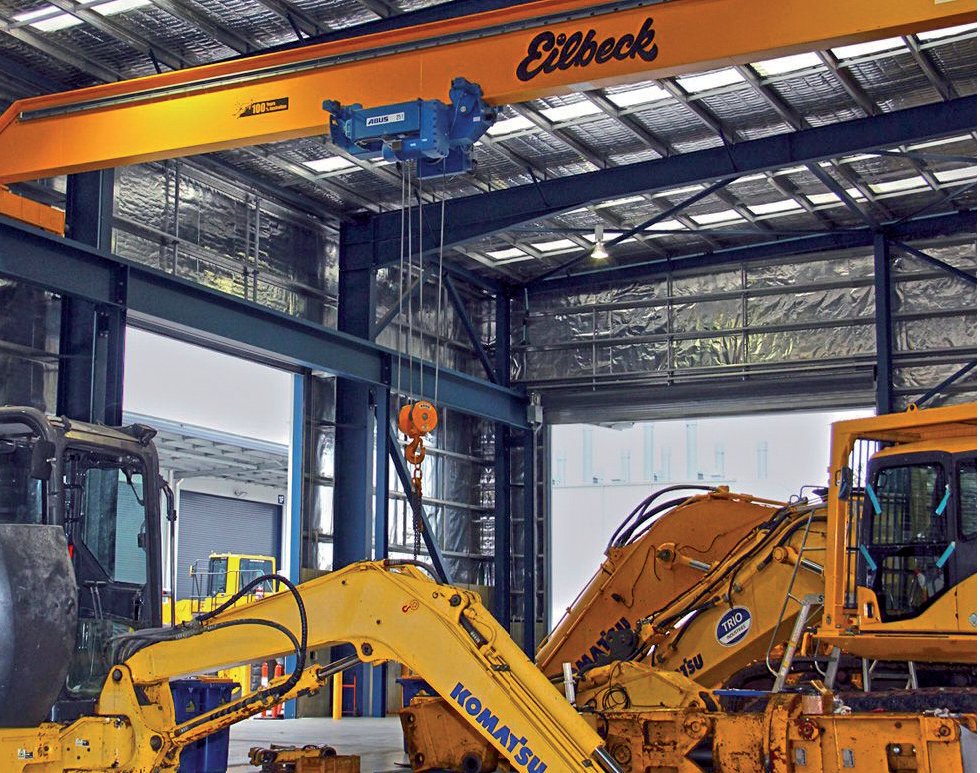 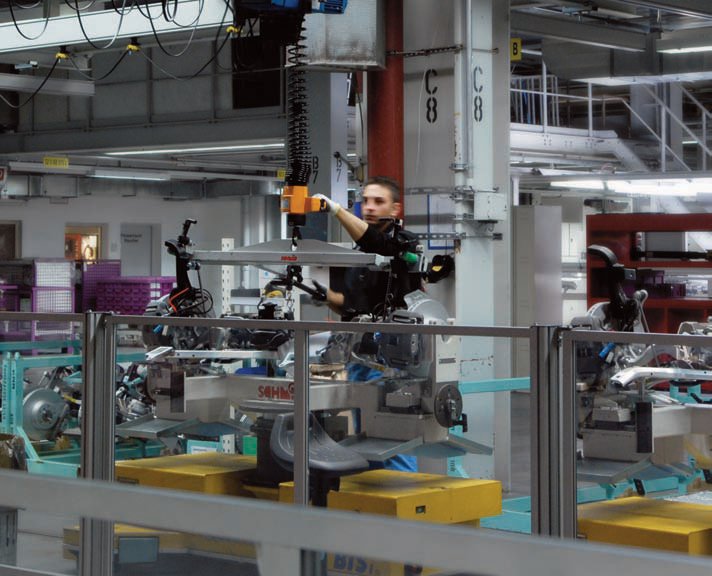 Using one of Eepos’s systems at BMW’s axle assembly line in Dingolfer, Germany 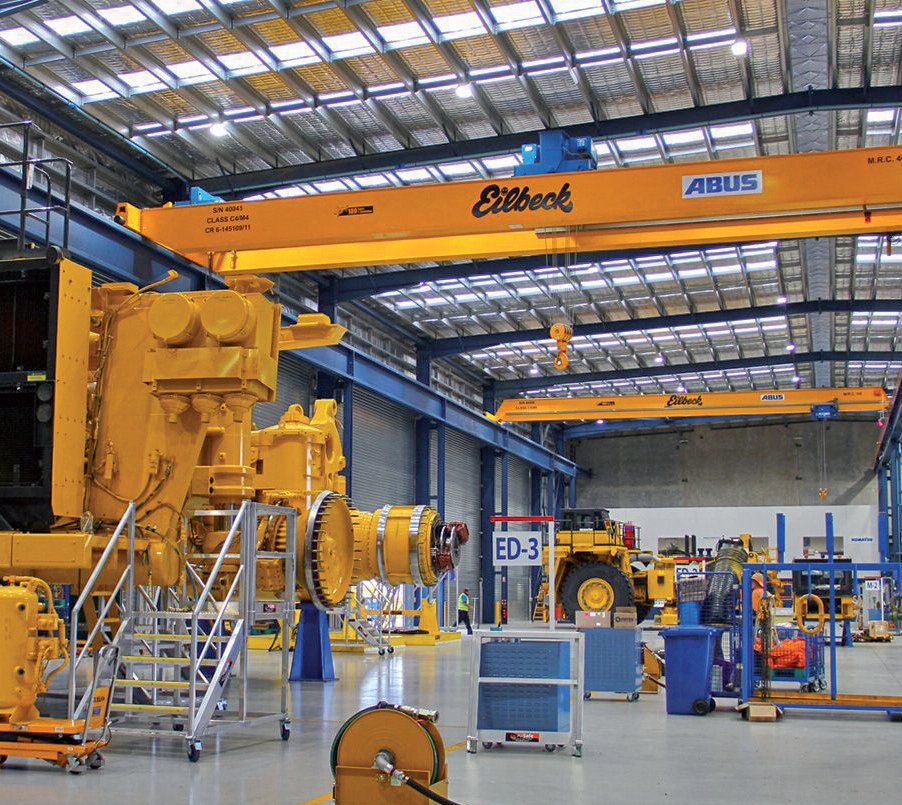 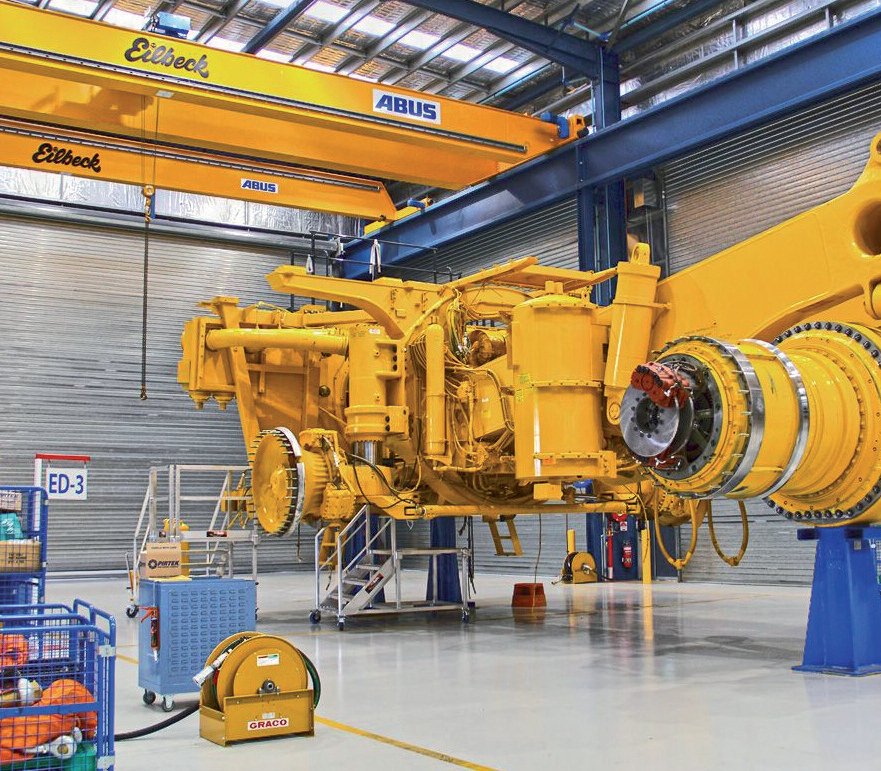 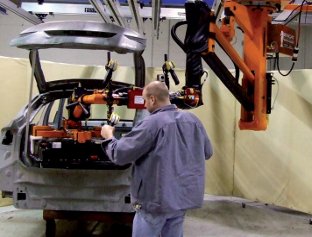