Moving with the times

Ensuring the safe and efficient movement of a retractable roof on the largest free-spanning dome stadium in the world is no small feat. Hoist looks at how the expertise of material handling specialists MHE-Demag and automation firm ABB ensured this project became a reality.

Opening on 28 June 2014, the Singapore Sports Hub stadium located in Kallang, Singapore, is a major sports complex that has the capacity to hold up to 55,000 visitors. The building, three years in the making, has retractable seating capability, which makes it the only stadium in the world capable of hosting a multitude of events such as rugby, cricket, football, athletics and concerts.

However, the innovative seating isn't the only retractable element of the impressive new stadium, which is equipped with a retractable canopy that spans 312m. MHE-Demag was one of several key firms involved in the ambitious project, which would result in the production of a moveable roof that weighs 2200 tonnes, the equivalent of more than 1800 cars.

Moving mechanism
MHE-Demag was tasked with supplying the moving mechanism for the retractable roof system, and worked with engineering consulting firm Arup Associates and construction business Dragages Singapore to complete the task.

At its core, the retractable roof is incorporated to block out sunlight and rain, providing shelter during sport events. It consists of two panels that are north and south facing, with each panel weighing around 1,100 tonnes. These are seated on 20 load transferred wheel bogies, which are located evenly on five steel trusses.

According to MHE-Demag, the driving mechanism consists of 16 line pull winches, 32 holding storm-brakes, energy chains and an advanced electrical control systems. Each of the 16 winches were equipped with two independent inverter drive motors while the greatest engineering challenge, according to the manufacturer, came in aligning the trusses and wheel bogies of the huge retractable roof within a tight and acceptable tolerance.

Safety features
Central to the roofing project were the safety features that include primary and back-up sensors and an anti-skewing system, which ensures a maximum skew position difference of only 35mm between any of the five trusses that support the movable roof.

Elsewhere, the brakes keep the movable roof panels locked in their desired location; designed with the fail-safe principle, the claws of the storm-brake system used close automatically when power is interrupted.

"Upon successful completion of roof installation, the activation of the movable roof is via a single start button inside the event control room," the company confirmed.

Patrick Chin, team leader on the Sports Hub project, said: "The testing and commissioning of the retractable roof was extremely demanding as everyone was required to deploy on the roof to clear obstacles and monitor the movement of wheel bogies to ensure a smooth and accident-free roof movement.

"It was impressively successful and got all staff on site excited and satisfied with the positive outcome after spending numerous sleepless nights at the roof".

Another business intrinsically involved in the project was power and automation specialist ABB, which has an impressive track record when working with retractable roofs.

"This ambitious project represents a remarkable milestone for ABB in terms of intelligent control and automation, and we are proud to be a part of Singapore's iconic achievement," explains Pekka Tiitinen, head of ABB's discrete automation and motion division.

Motion abilities
Three ABB Programmable Logic Controllers (PLC) are central to the motion abilities of the roof, providing the control and coordination for 32 regenerative variable speed drives to automate the roof.

According to ABB, regenerative drives can recover thermal energy from the motor deceleration process, convert it into electrical energy and then feed it back into the network, which saves energy that would have otherwise been wasted.

Owing to the company's Direct Torque Control, the ABB drives can maintain power supply quality and run with zero speed torque, increasing the safety and energy efficiency when moving the roof. 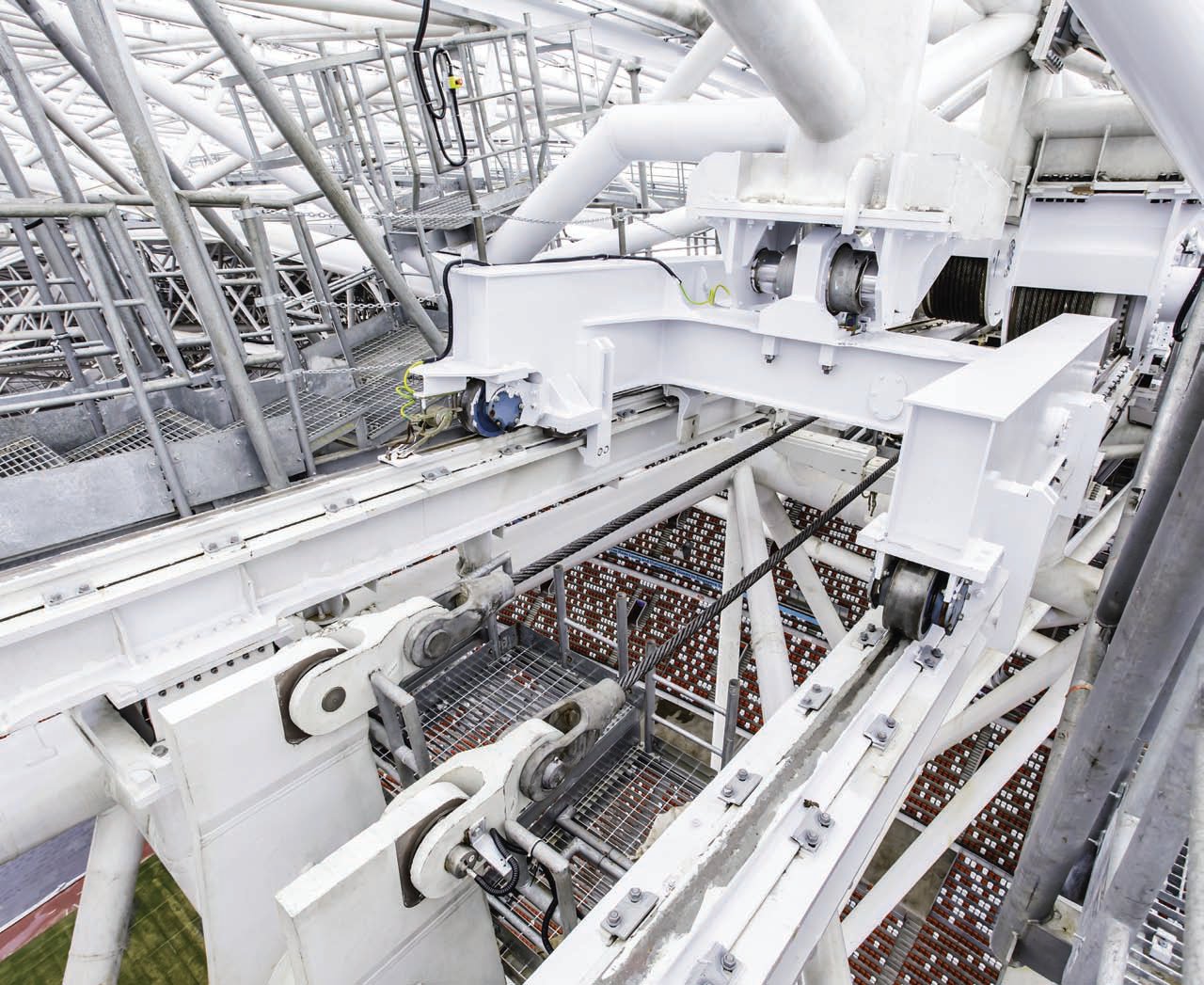 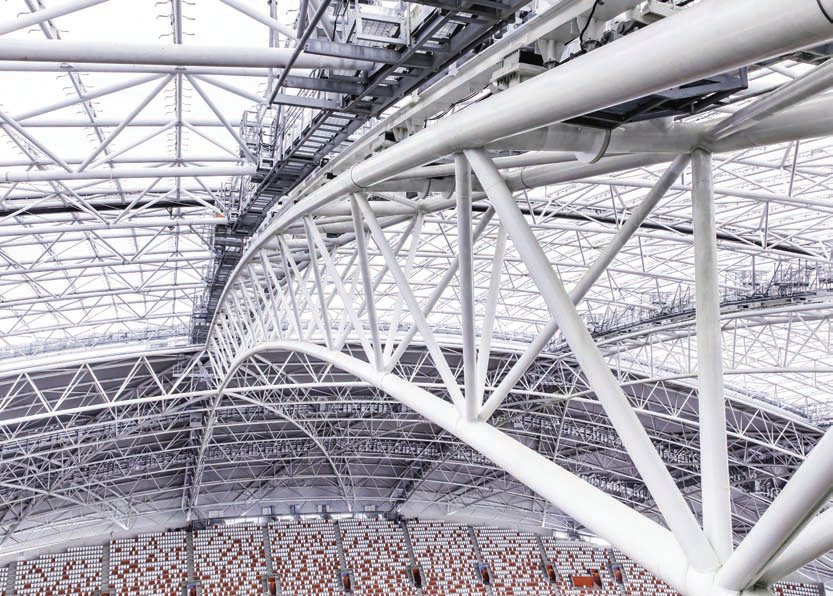 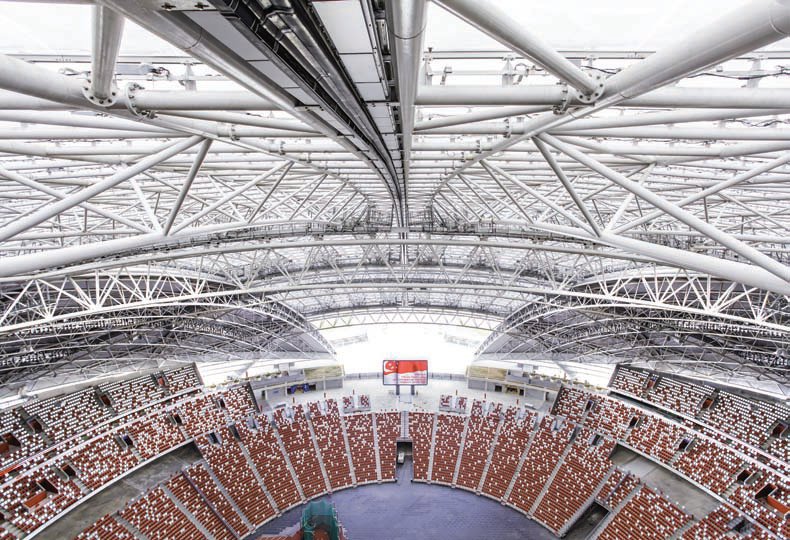 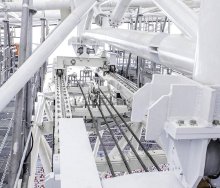 Behind the scenes: A closer look at complex roof mechanism