A deal to purchase three ship-to-shore rail-mounted gantry cranes for the Port Authority of Guam has recently received approval from Guam’s Public Utilities Commission despite controversy over the cranes’ condition. Kevin Walsh reports

Guam's Public Utilities Commission (PUC) authorised a USD 12M deal, drawn up between the Port Authority of Guam (PAG) and joint owners of the cranes Matson Navigation Company and Horizon Lines. The 30-year-old Hitachi container cranes were previously used at the Port of Los Angeles (POLA), but since 2006 the port considered them too old, structurally unstable, under-utilised or slow to continue operations.

Furthermore, deficiencies in the cranes highlighted in a report by structural engineers Casper, Phillips and Associates have raised safety concerns, leading to the Commission insisting that the PAG complete repairs to the cranes and formulate a structured maintenance programme before operations begin.

Shipping carriers Matson and Horizon Lines bought the cranes in 2008 for USD 50,000 each, leading to high-level criticism of the deal as the report states that repairs should be the concern of the current owners. The report said: "We believe that several operational and safety issues should be corrected either by Matson/Horizon up front or otherwise be accounted for in negotiating a fair purchase price for the POLA cranes.

"In either case, PAG should assume that the cranes will need to be slid back off the working dock one at a time in order to accomplish the recommended modifications. The total estimated cost for this is approximately USD 9M for all three POLA cranes."

Vice speaker of the 31st Guam Legislature, Benjamin Cruz, explained that the cranes' current five-year expected lifespan could only be extended to 20 years if the USD 9M repair and upgrade program is followed.

Furthermore, he highlighted downtime currently experienced due to intermittent problems with the aging cranes, which the report said included periods of between three and five months where cranes had been out of order over the last few years. The report stated: "The current situation in Guam does not allow for an analysis of existing work orders to obtain a good view of anticipated expenses. It seems from inspection that the maintenance money spent on the POLA cranes [was] USD 3.8M over 30 months, USD 127,000 per month."

As of May this year, Matson Navigation Company had spent roughly USD 85,000 on critical repairs and upgrades for the cranes. These included new diesel engine generator power sources, ABB variable speed drives and controls for each crane.

Matson has since confirmed that these were the only repairs necessary before the cranes were shipped to Matson's facility at the Port of Guam. Matson is now leasing the cranes for use by the Port of Guam ahead of the deal's completion.

At a special meeting of the board of directors of the PAG this May, general manager Mary Torres said that USD 12M for the purchase of the cranes was "as is", prompting Cruz to assert that buying two new cranes under warranty for USD 18M would be better value than paying USD 12M for three cranes plus the remainder of the USD 9M repair costs outstanding.

However, chairman of the board of the PAG, Daniel Tydingco, dismissed these concerns before the board voted unanimously to put the deal before Guam's PUC for consideration and eventual approval. Tydingco said that by his interpretation of the Casper, Phillips and Associates report, the recommended USD 9M expenditure on repairs would only be required to restore the cranes to the standards of a new crane, whereas the PAG only required them to be capable of lifting 20-25 containers per hour.

Since 2006 the Port of Los Angeles has been ridding itself of its old fleet of cranes, and as part of this drive the port sold the three cranes through salvage auction in January 2008 to sole bidders Matson Navigation Company and Horizon Lines.

To offset concerns that the purchase is a poor decision -- as the cost of repairs and maintenance could far exceed the cost of purchasing three new cranes -- the PAG will develop a tariff that covers the cost of the purchase, financing and maintenance programmes. This will be developed from PAG forecasts for cargo throughput. The port will file a report with the PUC to update them on the condition and future plans for its existing gantry crane by 15th February 2013, while the progress of repairs to the three POLA cranes must be reported by 15th June 2013.

Commenting on one of the drivers for the deal, legislation that requires the port to buy or lease to own a minimum of two gantry cranes before the end of the year, PAG general manager Mary Torres said: "The board of directors and I are very pleased with the commission's review and approval of the sales and interim maintenance agreement, which enables us to meet the deadline mandated under Public Law 30-57.

"It is essential for the port to own its own cranes and the acquisition of the POLA cranes by the port presents a unique opportunity and value to Guam given its presence on the rails, record of operational reliability and elimination of disruption to ongoing operations. The port is a critical lifeline to the local community and the region and we strive to ensure a continued smooth flow of goods into the homes of every single resident of Guam.

The PAG has agreed a USD 14M budget to buy the cranes, which could be partly funded by a United States Department of Agriculture loan obtained in 2006 along with a loan from commercial lenders Australia and New Zealand Banking Group, the terms of which were approved by Guam's PUC at the end of last month. 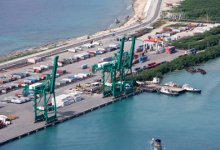 The POLA cranes, leased to the Port of Guam ahead of the deal’s completion

Delivery of the POLA cranes to the Port of Guam 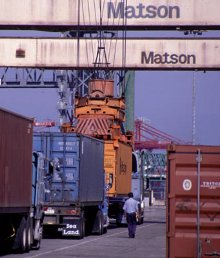 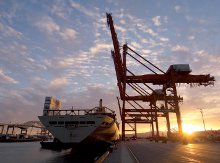 A Matson ship being unloaded at the Port of Los Angeles