Two crane companies that do business in the Middle East give their views on the region’s prospects and challenges, and discuss the projects they have been a part of. Tony Rock reports.

The Middle East has been the focus of worldwide attention in recent months, giving international football fans an opportunity to come together to celebrate the sport at the World Cup in Qatar in December, and the nations’ leaders an opportunity to tackle global warming at the UN’s Cop27 Climate Change Conference in Egypt a month earlier.

The region has caught the eye of businesses such as Turkey’s BVS Cranes too, according to its marketing and business development manager Önder Topuz. That’s because growth there will, in his opinion, be higher than before and during the Covid-19 pandemic due to what he calls the “delayed, or deferred demand” that built up during that period.

“This demand, I can tell, is going to be realised in a couple of years,” he predicts.

Whether it’s in infrastructure, manufacturing industry or power plant sectors, “or any type of development”, investment too is going to be “high in the coming five or ten years”, Topuz says, before adding that BVS Cranes is ideally placed to take advantage of a favourable economic scenario.

“We have the strategic advantage of the geography,” he explains, referencing Turkey’s “easy access” to the ports that provide “fast and very convenient transportation to different countries”.

There is also the access to “well-developed Turkish industrial manufacturing”, and then there is the fact that the country is known for its high production values.

“The Middle East always considers or perceives BVS Cranes and Turkish products as prime products and comparable to any [made] in Europe,” says Topuz.

As well as being well-placed geographically, BVS can offer its experience of operating in various sectors and nations across the region. Its work, for instance, with engineering, procurement and construction (EPC) contractors sees the company conducting business in the UAE, Saudi Arabia, Iraq and Qatar, as well working in countries such as Lebanon and Israel.

“We made two very big – giant – gantry cranes for Qatar Steel,” says Topuz, adding that the firm has also worked with the Dubai Electric and Water Authority, for example, for which it has supplied cranes of all types.

BVS also delivered a wheeled gantry crane for a Turkish contractor working on a tunnel in Saudi Arabia. The crane – which Topuz says was designed as a prototype but ended up being the final product – has been used to install a water line made up of 12m-long, 1m in diameter steel pipes.

And the company has been active in Egypt, too, in the extension of the Cairo metro system.

“We worked with one of the largest French contracting companies: Vinci,” says Topuz speaking about the Egyptian infrastructure project. “We produced a couple of gantry cranes for the concrete segment preparation plants. We also worked in cooperation with a major launching girders [gantries] manufacturer in Portugal to make a 70-ton hoist, which is used to lift the concrete segments of the viaducts of the metro project.”

Working in Egypt hasn’t necessarily been straightforward for BVS in recent times. Until recently, when the presidents of Turkey and Egypt shook hands for the first time at the Qatar World Cup, the governments in Ankara and Cairo hadn’t enjoyed the best of diplomatic relationships, with both taking opposing roles and views on a number of issues.

This, says Topuz, created some difficulties in terms of doing business. “It’s not a secret that in the past five or ten years there had been some political problems,” says Topuz.

“But, currently, we are in a preferable position [as] we can make business much more easily because the turbulence has reached a conclusion and now we have better relationships… [due to] the recent meeting of the presidents.

“[This is] very good news,” he continues. “This is going to reduce the tension and increase the possibility of making business transactions.

“Now it’s a new era. It’s a new beginning. I think the coming years are going to be [a much better time] for BVS Cranes to be increasing sales in the Middle East,” says Topuz of a company that generates the majority of its business in Europe, the UK and Asia.

“We… have good relationships with Middle-Eastern countries,” he adds. “[It will be] an important market for us.”

Compared with BVS, a far greater proportion of Lemmens Crane Systems’ business is conducted with the Middle East.

The company focuses on three markets – Benelux, Russia and the Middle East – with 80-90% of business coming from Russia and the UAE, with the latter serving as a base for North Africa and the wider Middle East, such as Oman and Kuwait, and to a lesser extent countries such as Qatar and Bahrain. The company states that it is proud to have been involved with projects such as a desalination plant in the UAE’s Umm Al Quwain, and a waste management facility in Dubai, which generates power from burning rubbish.

As with BVS, Lemmens Crane Systems sees “lots of opportunities” in the region, particularly, says managing director John Lemmens, in Saudi Arabia and Egypt, which he thinks are countries that will “develop very fast and will be big markets”.

Egypt, especially, he says is a “huge market” for the company. So important, in fact, that while Lemmens Crane Systems handles some projects directly, and some with a partner, there is room for it to have “another few partners” there.

In fact, most of the company’s business in the Middle East comes through serving contractors that are, for example, working with municipalities that have engaged in building programmes. However, the company’s aim “is to move as fast as possible into the end users”.

Those end users currently operate in sectors such as the steel and concrete industries, but Lemmens says in principle his definition of an end user includes “everybody who needs to lift something [weighing] more than 100 kilos”.

As with many businesses, supply chain challenges caused by the Russia-Ukraine conflict has impacted Lemmens Crane Systems’ operations in the Middle East.

Other issues the company’s MD highlights include on some occasions having difficulty collecting payments, a problem with which BVS Cranes is aware of too.

“The important thing is to be to be very careful about choosing your customers,” says BVS’s Topuz, although he stresses it’s not an issue the firm has encountered often in the region.

“On the contrary,” he adds. “They always try to be on the correct side. They were decent customers, working professionally, [whether] a private or a public company.”

A spot of due diligence – “a credit search or a ‘credibility search’, and usually a simple investigation on open sources” – is enough to avoid any potential problems, although Topuz adds that BVS will also use sight letters of credit, “which provides enough sufficient guarantee of the payments and collections”.

However, such issues appear to be trivial when compared with the scale of the opportunities that are on offer in the Middle East.

From its sites at Jebel Ali in Dubai and also at Walsall in the UK, Promat BD develops and manufactures forged flanges and special fittings for the global onshore oil and gas industries as well as for the energy sector.

The company produces not only a broad range of standard products, but also numerous custom-made items.

Several Demag pillar-mounted slewing cranes were acquired to help with the task of producing large and heavy pipeline components at the Dubai location in 2014.

With operations set to be expanded with an additional production line, Promat BD required handling solutions that would take care of a series of tasks – including when cut steel plate elements are transported to various areas in the new manufacturing shop for, for example, welding, machining and painting.

Promat BD’s experiences with its existing slewing cranes led it to work once again with Demag for this project. The solution – designed and installed on-site by Demag engineers – includes an overhead travelling crane with a load capacity of 10t, which comes from Demag’s EKKE standard modular range of products. The corresponding girder completely spans the 20m width of the bay.

Each of the five working areas is equipped with a pillar-mounted slewing jib crane that has been custom-configured for the corresponding task. Load capacities range from 1.0t to 2.0t, the jib lengths vary, and the slewing ranges from 0° to 360°. Even though all five slewing cranes are different from each other, they are standard Demag products.

The slewing cranes make it easy to work on all sides of the pipeline components, which can weigh up to 2.0t. The cranes are controlled with a cable-connected Demag DSC-7 controller, which enables operators to control all movements of the jib trolley and hoist movements.

“We are very happy with [Demag’s] products, the technology they use and the service they provide,” says Augustine Job, engineering/ production manager at Promat BD. 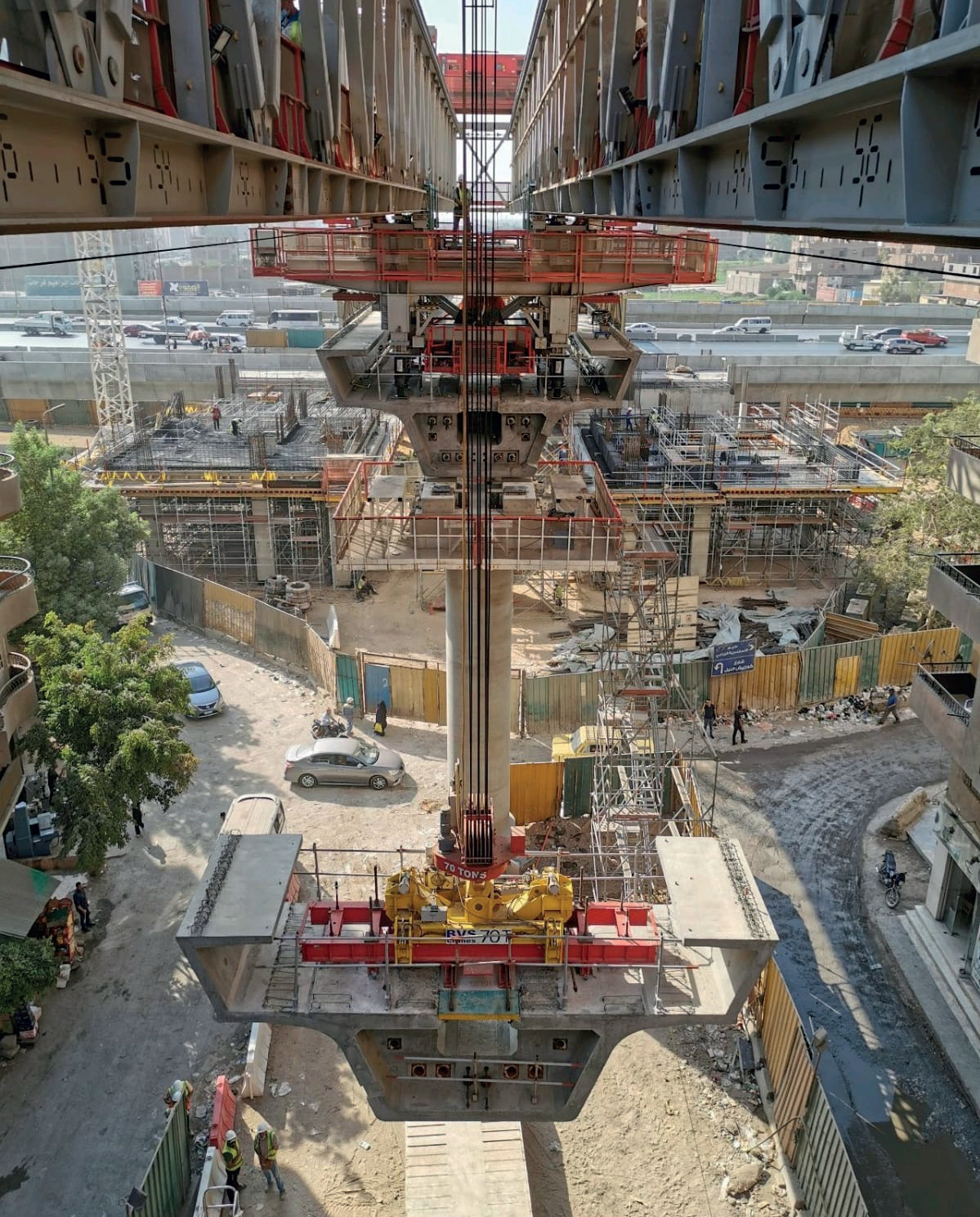 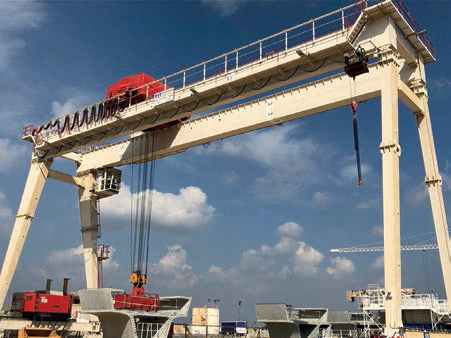 …and the company’s cranes in operation for Qatar Steel 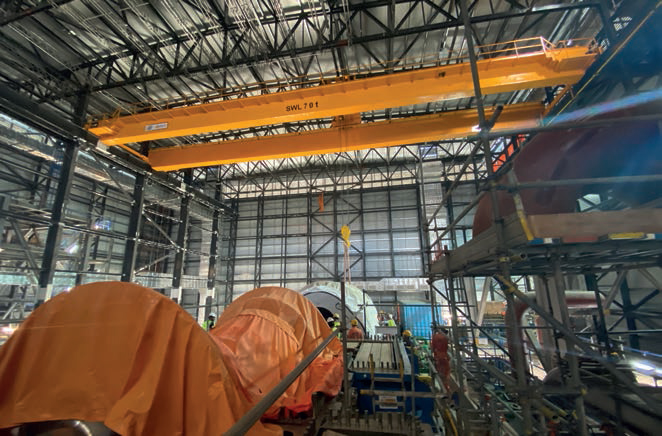 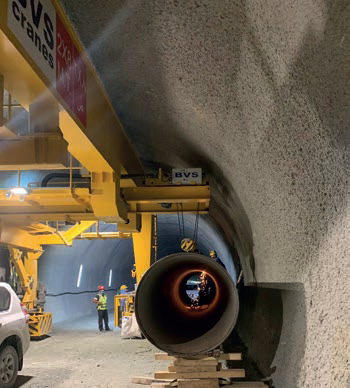 A BVS RTG in a Saudi Arabian tunnel 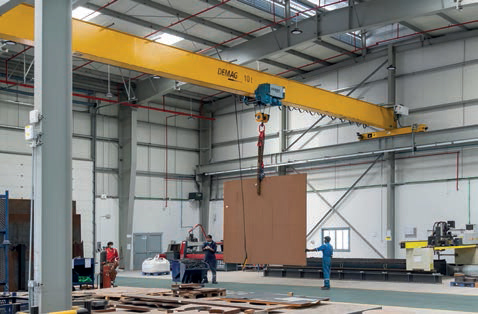 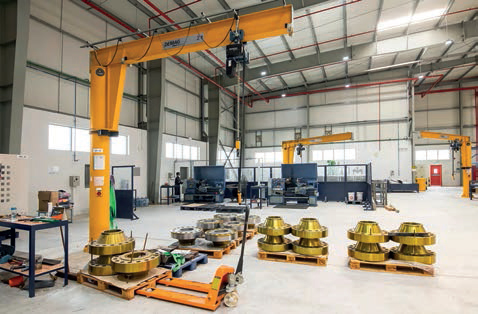