As with many capital equipment sectors, conveyor belt manufacturers have arguably suffered from a challenging economic climate and a cautious customer base that have put new equipment investments on hold. However, the tide has turned and as sales pick up, technological developments continue at pace.

The European conveyor belt market is worth hundreds of millions of pounds with industrialised countries such as England, Germany, Spain and France accounting for the majority of this demand. Conveyor belts traditionally fall into three categories, light, medium, and heavy weight belts, and it's the medium band that comprises the major market share with more than 50% of all sales across Europe. This category is often used to transport bulk handling, sand and gravel.

However, the light weight portfolio of conveyors, used to transport food and pharmaceutical products, also has a major part to play in this field. In these markets, automation, and the efficicency savings brought about by such technology is key.

One company that has been operating in this field for nearly four decades is LVP Conveyors. The firm supplies conveyors to a range of industries such as food, pharmaceutical, healthcare, automotive and manufacturing. In addition to designing various material handling systems, LVP is an approved distributor of Okura Yusoki equipment as well as Carryline's range of conveyor systems.

New to the Carryline portfolio is the Spiral conveyor, a compact system designed to transport items both up and down with chain widths ranging from 83mm through to 140mm and a maximum of 220mm. The system can be constructed to customer requirements but features a minimum centre diameter of 800mm and a maximum recommended operating speed of 60 metres per minute.

According to Jonathan White, managing director at LVP Conveyors, the market for conveyor systems has undertaken some changes in recent years.

"We are seeing an increased use of plastic flexible belt conveyoring similar to the Carryline type of conveyor, which is growing in use and popularity across the UK and Europe," he explains. "New developments are taking place in spiral elevatators and lowerators as well as accumulation systems and side grip systems. This type of system is seen as a good option by end users due to its high durability, low maintenance and modular construction. Available in a range of widths and material types such as aluminiium and stainless steel as it can suit most industries conveyoring needs."

For White, one driving force many of it's customer's investments is the push for automation with sectors such as food and pharmaceutical remaining as growth areas for the group. "Multinational companies will always have a budget to spend and with increased labour costs across Europe there is a further push for factory automation," he adds.

His thoughts are echoed by Simon Turner, managing director at Cobalt Conveyors, who says the Lancashire business has experienced a considerable upturn in incoming orders during the last six to nine months. He attributes this increase to a number of factors.

"Business has picked up considerably and I think you can attribute that growth to a number of factors. Companies have been loosening the purse strings and as a result, they are comitting to investments that they previously had placed on hold," he explains. "Firms will often adopt the mentality that the system will pay for itself overtime by automating the process and ensuring it is also more efficient."

The cobalt range of belt conveyors are manufactured from extruded aluminium measuring 140mm deep x 40mm wide with a clip on side facia. The group also offer a shallower design that measures 80mm x 40mm with a drive drum as the main drive. All of its conveyors have the option of either a drive drum or motor gearbox design depending upon the application.

"Our range of conveyors start at 1m long upto over 20m long and widths from 280mm to 1280mm wide. A wide range of belts can bu used from black PVC, to grip face, silicone and FDA approved PU belts. All our belts have twin 6mm x 4mm wide tracking guides attached that stops the belt from tracking off centre and extends the life of the belt," he says. " Special belts with markings on have been supplied to enable production staff to place 'pots' onto the belt at the correct pitch when in conjunction with an automated filling machine."

The company was previously carried out the palletising of cases manually, which were then transferred onto a pallet truck in its warehouse. The spiral conveyor has been installed in a 2sqm part of the Intersnack facility with the spiral feeding into a high-level powered roller system to the company's warehouse. Accordng to Astec, the installation has cut manual labour costs associated with the operation while also promoting a more efficient packing operation. 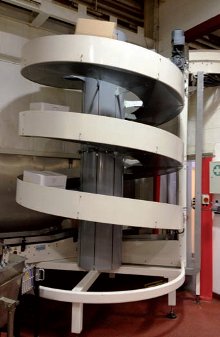 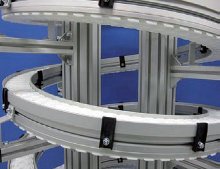 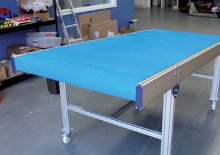 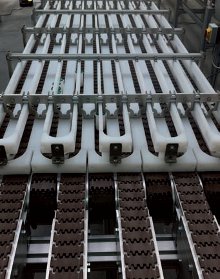 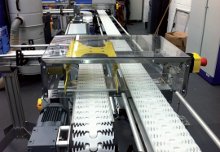