Brighton, Darling and Kary of Columbus McKinnon Corp. have invented a hoist travel limiting system that, with electronic controls, is claimed to improve on several previous designs of limiting mechanisms. The patent (US Patent 7,284,743) was published on October 23 2007 following an application filed on November 3 2006.

Hoists often include travel limiting devices to ensure safety, particularly when lifting or lowering heavy objects. These are intended to prevent damage or dislodgment of the load, or damage to the hoist if the load is attempted to be lifted too far. Similarly, operating the hoist too far in a downward direction could also be desirable.

Some of the previous developments to this end and their drawbacks are as follows:

US Patent 7,097,155 uses optical sensors to detect a present minimum number of windings on the drum. If this limit is reached an alarm is activated. The inventors say that an optical sensor working off the number of drum windings does not have application across a broad number of hoists. 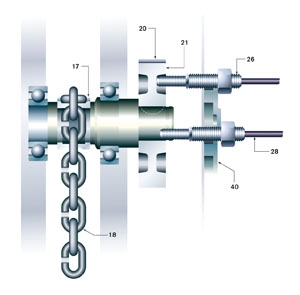 US Patent 6,966,544 also keys off the windings on the drum but with a proximity limit switch to sense the presence or absence of wire rope around the drum. The inventors say that this type of configuration is difficult to adjust depending on the desired limits, and also requires a winding drum.

A geared limit switch, typically driven by the hoist shaft, operates by counting the number of revolutions of the hoist drum. When the threshold is met a cam or gear actuates a microswitch and power is cut. The geared limit switch can be fitted with different gear ratios to accommodate various lift ranges. The adjustment becomes more sensitive as the gear ratio becomes numerically higher.

A screw-type limit switch has a fine-threaded shaft with a pair of nuts travelling along its length. A microswitch near each end of the shaft provides the limits. The nuts can be adjusted but the length of the shaft limits the device.

Thus the new development, say the inventors, is beneficial in providing a limiting device that has set points that are easily adjustable and can be used with hoists having non-winding drums or sprockets.

The objectives of the invention include the provision of a hoist in which the upper and lower limit of travel can be set and be entirely adjustable electronically. The limits are triggered by rotation in the gear train. Another objective is to provide a hoist that limits the upper and lower vertical travel of the loads using slots or bosses in a rotating component of the hoist's gear train. The limit switches may be independent of the hoist's available lift. 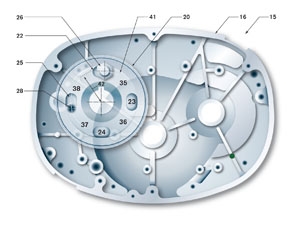 The control system of the invention may have a user interface (Fig 4 - 39) by which the upper and lower limits of rotation of the hoist drum can be easily adjusted.

In Figs 1 and 2, the preferred embodiment, the hoist includes a conventional frame or housing, a load-bearing chain (18) extending over a drum or sprocket, a motor (17) for selectively rotating the drum, a ear train between the motor and drum, and an AC motor brake.

Other types of drums may be used, such as a conventional drum around which the wire rope of a winch is wound-on or wound-off, thus the term 'drum' includes sprockets. 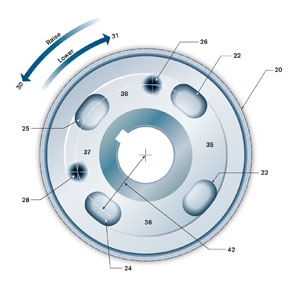 Fig 3 – One of four diagrams in the patent showing the relative orientation of the gear end face and proximity switches, shown here in the first rotational position

The hoist includes a conventional forged gear train between the drum and motor to couple them and transfer the torque and speed of the motor to a torque and speed that can be utilised to drive the hoist drum. The patent also covers other gear arrangements and ratios such as a billet gear.

A sprocket gear (20) rotates with the drum or sprocket about the axis x-x. Shown in Fig 1 it has a right-facing face (21) rotating with the drum as in conventional hoists.

The preferred embodiment of the limiting system of the invention includes two proximity switches (26 and 28) supported so that their sensing ends are adjacent to the rotating face (21) of the gear. The proximity switches communicate with the controller as part of the hoist's control circuit in Fig 4. The user interface has set buttons 44 and 45. The conventional proximity switches are capable of sensing the presence or absence of an object or surface within one or two millimeters of the sensing end without touching the surface. A cited suitable type is the model E57-08GU02-C from Cutler-Hammer.

The mounting bracket (40) holds the proximity switches close to the gear face and positioned adjacent at the same radius (42) from the x-x axis to sense the same annular portion of the face as it rotates. They are positioned so as not to be at right angles to each other - actually at 109 degrees apart in the preferred embodiment. 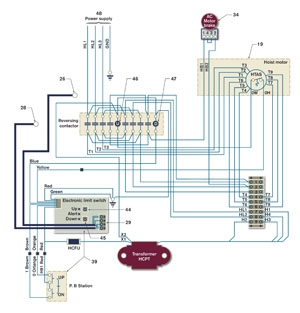 The orientation of the switches relative to the slots will result in the proximity switches sending a sequence of signals to the gear during rotation of the gear. The rotation of the face in a counterclockwise direction correlates to the drum moving in a downward direction with the load moving away, and vice versa. Since the slots 22-25 are orientated at right angles, but the proximity switches are not, the switches send a different sequence of signals to the control unit depending on whether the face is moving to wind up or down. The slots are elongated with opposed parallel surfaces with semicircular ends with a radius the same or larger than the radius of the ends of the switches. The slots are thus longer than the diameter of the sensing ends of the proximity switches.

Fig 3 shows a first signal count of 'on-on' with switch 26 registering an 'on' signal as it senses a positive surface, as does switch 28. As the face moves counter-clockwise, the leading edge of slot 22 passes in front of switch 26, so that the switch changes its signal from 'on' to 'off'. At the same time switch 28 will still be sending an 'on' signal, giving a count of 'off-on'. Similarly the count changes another twice with continued upward drum rotation as shown in Table 1:

If the drum and face are moving in the downward or clockwise direction the sequence will differ. Thus, starting from the Fig 3 position, the first signal is again 'on-on' but then switch 26 will still be sensing the presence of surface 38 when proximity switch senses the absence of surface 37 as the leading edge of slot 24 passes by proximity switch 28 to result in an 'on-off' signal. The signals change again with continued movement as shown in Table 2:

Thus the system is able to determine from the sequence of signal which way the drum and chain or wire rope are moving. The preferred embodiment also provides a check of location when the hoist is turned off and then turned back on.

Some account for 'play' in the gears. If the reading when the hoist is turned back on has changed to 'on-off', the control knows that the drum has rotated on count down, or if the count is now 'off-on', control knows that the system has rotated one count up. However, if the control registers 'off-off', it is not able to determine whether the gears have rotated two counts up or down, and thus the hoist is immediately shut off until recalibrated.

The control's user interface allows for the hoist's upper and lower limit to be easily adjusted without reference to the total travel of the hoist or requiring mechanical adjustment of the switches. The up-set button (44) and down-set button (45) are included on the interface, together with a conventional panel or remote pad for

user hoist movement. The upper and lower limits can be set by running the hoist between the desired upper and lower limit and using the system to count and store the number of sequence changes between those limits, thereby calibrating the travel limits and setting a reference sequence and count for the permitted travel of the chain or wire rope.

To set the upper and lower limits the user pushes both the up-set and down-set buttons simultaneously to send a signal to the control to both zero and temporarily inactivate the sequence counter. The hoist is operated so the load-bearing end is at the desired upper or lower limit, and either the up-set or down-set button pressed accordingly. If the count and sequence of signals between these two positions is exceeded, the control disconnects the power from the motor and sets the brake.

This article is an edited version of US Patent 7,284,743 published on October 23 2007 from an application filed November 3 2006. The inventors are James J Brighton, Samuel J Darling and Phillip W Kary, all of Michigan, US. The patent is assigned to the Columbus McKinnon Corp. of Amherst, New York State.

The patent assignee, the Columbus McKinnon Corporation, is the parent company of several hoist-manufacturing divisions including CM Industrial Products, Yale Hoist, Coffing Hoist and Budgit. Budgit (Lift-Tech Intentional) is actively marketing the invention on its electric hoists based on easy adjustability at the touch of a button. The range covers capacities 0.5-3 US tons with a standard lift of 10 feet. The hoists also have a new heavy-duty motor brake of the AC spring set disc type, with one-step adjustment. The limiting system development can be used on several other models available from group companies.

As an edited version of the original patent, this article may omit legally or technically important text or detail.