Intermodal cranes and lifting apparatus are vital to the movement of world trade. Julian Champkin looks at this large and varied sector.

Intermodal cranes are those that move goods from one means of transport to another. Predominantly, and globally by far the greatest volume, is from ship to shore. Globally about 750m TEUs pass through container ports annually, (Source: UNCTAD), a TEU being a 20ft container or its equivalent; at any one time five or six million shipping containers are in transit, by sea, rail or road; and each one of them has been loaded onto its means of transport at the beginning of its journey, will be unloaded at the end, and most likely will have been transferred from truck to rail, or ship, and then back to truck again, en route. The vast majority of world trade passes through some sort of intermodal handling. It is big, and vital, business.

Intermodal lifting gear comes in many types. Mobile harbour cranes, and gantry cranes, which can be fixed, rubbertyred (RTGs) or rail mounted (RMGs) are perhaps the most common. Each have their advantages and problems. RMGs follow fixed routes, which allows for easier automation. Rubber-tyred cranes can travel more freely, but will encounter the uneven surfaces that frequently develop in concrete yards or docksides. Variations in slope, tyre condition, and the angles at which the containers are stacked all have to be coped with. Konecrane’s 16-wheel RTGs, when equipped with Active Load Control and Autosteering, have, they say, the built-in tolerance to handle a rough yard surface and these other effects in automated operation and still maintain accuracy in positioning their load. Guidance of RTGs nowadays can be automated by GPS and is programmable to follow predetermined routes.

Konecranes say their Boxhunter system is a first in the RTG world. The cab is at near-ground level, giving the operator a close view of the trucks and trailers on which he is depositing the container; the operator is looking horizontally rather than down from above, which is ergonomically less stressful.

Kalmar are specialists in intermodal movements. Ilkka Annala is their vice president for Intelligent Crane Solutions. As he points out, there is an intermediate stage in transferring between different modes of transport. Trucks and rail cars do not like waiting; they will unload as soon as they arrive, and will not want to wait for the next mode of transport to be ready to receive. The container stack, on the ground, several units high, waiting to be sorted by destination and loaded appropriately, is a feature of most transfer sites, often taking up large areas of land. Handling from stacks is an essential ability of intermodal equipment.

Rail, says Annala, is increasing in importance. “Rail operation is currently seen as a green alternative to road transportation, and therefore terminal operators seem to be increasing their investments in rail. Just like marine terminals, intermodal rail terminals are increasingly deploying new technologies in order to adapt to changing container traffic demands.

“During the past two years Kalmar has been investing in updating its intermodal RTG and RMG product range. This includes adding automated AutoRTGs and AutoRMGs to our product portfolio.

“Kalmar’s automated systems use GPS, radar, laser measurements and cameras to place containers exactly. One operator can control several RTGs, the operators can be placed in a separate office building, and there are fewer personnel in the yard. Onthe- ground operators are needed only for truck handling and for exception cases.

“Currently we have ongoing projects with various intermodal terminals, both manual and automatic. They include applications to move containers from stack and road to rail, as well as applications where cargo is moved from road to stack and from stack to ship, both in manual and automated operations. Automation is growing on the intermodal business, and the usual benefits of automation apply to this sector. To increased safety, more stable productivity levels and reduced operating costs you can add the ability to cover peak loads during unsociable times such as weekends and nights when labour may be unavailable or more costly. However, automation has been applied only very carefully to intermodal applications so far.”

Large container ships are well suited to all-mechanical handling; rail trucks may be less so. “In train handling there are some work stages that still require people to enter the operational area, and those stages must be handled with care in the automation design,” he says. “Kalmar has integrated the safety solution to its own ECS (equipment control system) and that makes it easier to apply.”

A current example of Kalmar RMG deliveries is their delivery later this year of two RMGs for intermodal operation at the Cosco Shipping Ports (CSP) Iberian Bilbao Terminal in Spain. This is a large-scale container terminal serving as a gateway for container transportation throughout the Iberian peninsula and south-western France. The new RMGs will be used at the railyard, which contains four train tracks, five container stacking rows and a service lane for road trucks.

“By introducing this new equipment, CSP Iberian Bilbao Terminal will have the opportunity to operate their new cranes remotely,” says Eduardo Prat, vice president, sales at Kalmar. “This will improve their efficiency and safety, and support their commitment to sustainability.”

“These new cranes replacing their old RMGs are significantly faster, more reliable and future-proofed for efficient railyard operation,” says Prat. “They improve and increase the security of workers involved in the operations and the containers operated on behalf of the customers.”

Austrian crane-makers Kuenz have designed a rubber-tyred gantry crane which they say is able to cut operating costs by 40%. A key feature of their Freerider is the rope tower. Eight rope drums, with individually controlled motors, are able to move the head block and the load in all six degrees of freedom simultaneously in what they call a ‘stiff rope tower.’

This, they say, ensures optimum, precise, and safe handling of containers. Auxiliary ropes are not needed for fine positioning, and no additional anti-sway or micromotion technology is necessary for smooth operation: the angled arrangement of the hoist ropes give sideways stability to the load.

Gantry speeds for the Freerider are 130m/min with a loaded container and 160m/min without.

Intermodal terminals are increasingly built in residential areas, says Kuenz, and must therefore comply with noise restriction standards. The aerodynamic gantry crosssection reduces wind loads by 65%. Soft landing technology uses lasers to monitor the spreader and ensure it is placed correctly on the container and the ground. The crane control system automatically reduces the lifting speed to “creep,” making the spreader and container quieter. Less noise means happier neighbours.

Lifting and moving not just containers but complete loaded semi-trailers is another function of some intermodal operations. It is time-consuming and needs additional ground personnel. Kuenz has developed a special gripper camera that makes handling semi-trailers safer and easier. Four cameras are installed on the inside of the gripper’s feet, providing visual coverage of the areas around the gripping corners. The images are displayed on a four-part monitor in the crane cabin. The positions of all four grippers are clearly visible so the semi-trailer can be safely taken in the right place. For night-time operation, the viewing area is illuminated by integrated LEDs. 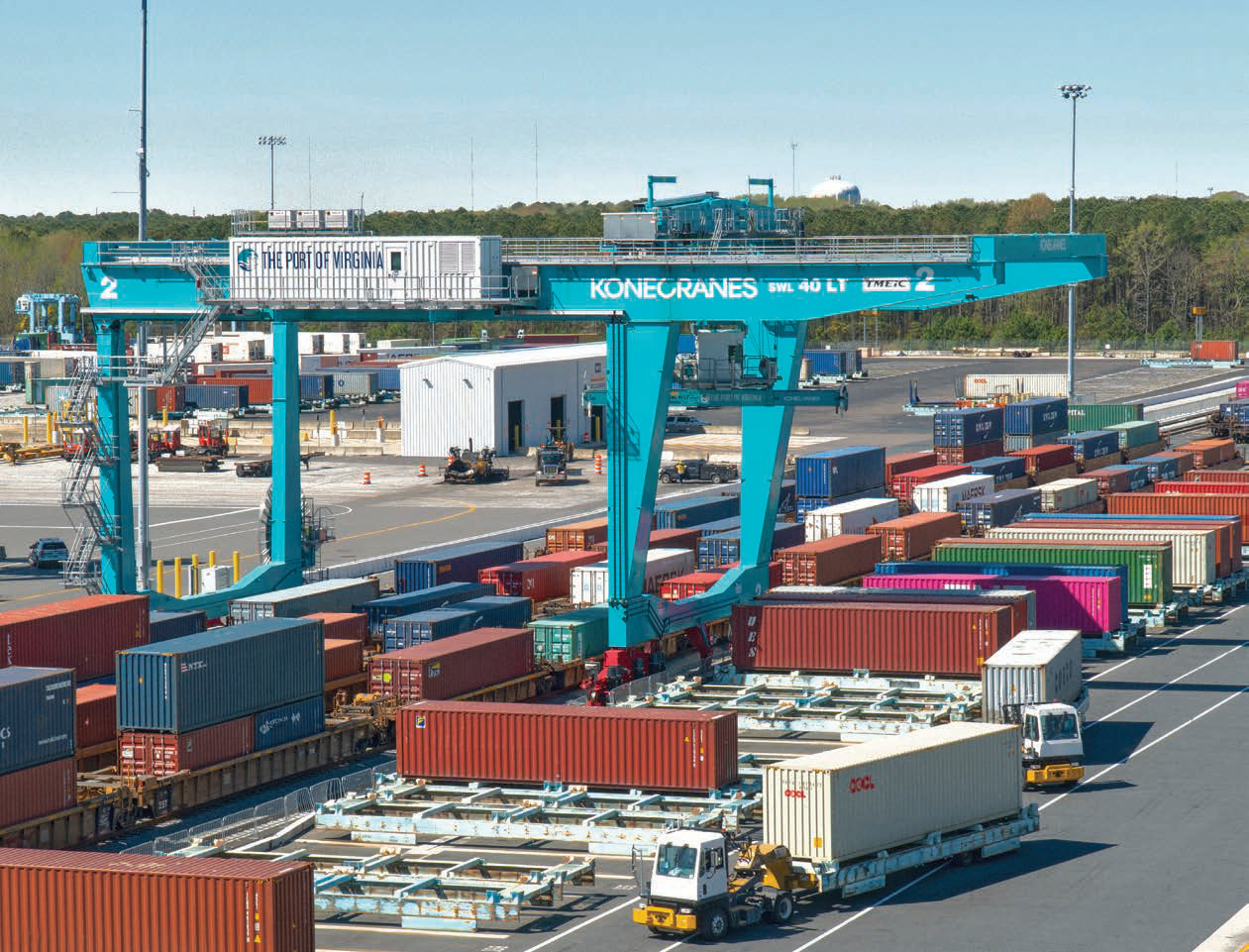 Konecranes is installing 86 automated stacking cranes at the port of Virginia to handle an additional 1 million containers annually. Virginia is the fifth largest port in the USA and is experiencing record growth. 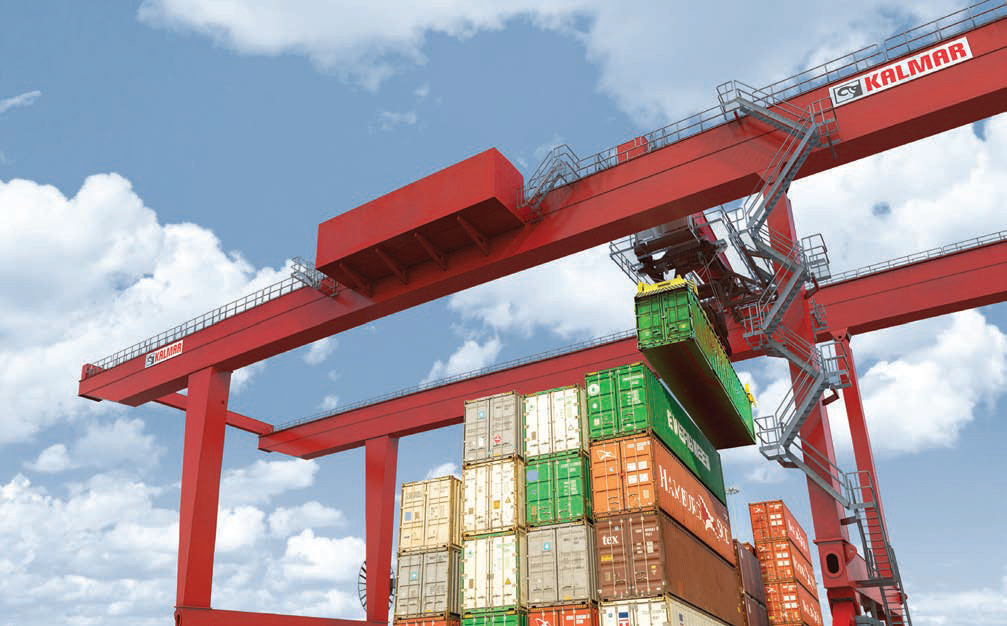 Containers handled by a rail mounted gantry crane from Kalmar