It has been ten months since Barack Obama was sworn in as America’s 44th president. Myra Pinkham asks how the policies of the new administration are influencing the overhead crane industry.

They admit that it is market forces – not the administration – that is to blame for the current downturn in crane demand, but they say they don’t believe that the moves that the administration is taking will help them dig out of the hole that they are currently in and could even make matters worse.

“Obviously we are in a down market right now, and we probably would be in a down market no matter who was president,” admits Steve Bayerlein, president of Kenrich Industrial Inc., Waukesha, Wisconsin. “But I believe that this current malaise is being made worse with the way that Barack Obama is handling the situation,” he says, maintaining that certain policies are not only not helping but are having the side effect of forcing businesses out of the country. “He needs to realise it isn’t the government that builds wealth. It is businesses that build wealth.”

Joe DiCesare, president of sales for FHS Inc., Lakeland, Florida, agrees, stating he believes that the administration “is choking the growth potential of our industry,” explaining: “There is no incentive for people to buy cranes, hoists and other material handling equipment right now. I’m a proud American. I want America to be the land of opportunity. I don’t want that to be taken away. We need to give companies incentives to employ people and to get this country going again.”

Some other crane builders, however, see the policies of the new administration being a little more of a mixed bag, with the economic stimulus programme having at least some potential to generate more business – especially in the public, or governmental, sector, albeit not at the magnitude, or the speed, that they would like.

“I think that the recession was exaggerated by the housing crisis, given that American people tend to buy things using their housing equity,” says Bayerlein. Prior to the financial crisis Americans had been hugely optimistic, “but that was on a very fictitious basis and now all the bad loans that were handed out are having a very negative impact” both on the economy in general and on crane demand itself.

“The crane business has been hurt big time,” says Bayerlein, observing that currently most of the crane orders that are being placed are for under 5 USt cranes with few of those going to “leisure” industries, where business is down as much as 50-70%. He says that most of the current demand is in the “need” markets versus the “want” markets, and that this trend is likely to continue for a while.

“A lot of people are just fighting to survive. The only reason we aren’t seeing more bankruptcies is that interest rates are so low that it doesn’t cost that much to hold on,” he says. “But the less manufacturing that occurs, the less need for cranes. Many manufacturers have a glut of space, so they have no need to buy cranes for a while.”

He maintains that some of the Obama administration’s actions and future agenda could make matters worse not better. “There are problems in the way that the economic stimulus money is being spent, with much of it not being spent yet and some that has been going to a lot of special interests.” Bayerlein also expressed concern about the effect of certain other of the administration’s policies, including its push to pass “a carbon tax,” or, cap and trade, as part of comprehensive energy/climate change reform. A bill including cap and trade narrowly passed the US House of Representatives a few months ago and most observers feel that the yet-to-be-crafted Senate version will likely include some form of cap and trade as well.

Charles Astafan, president of the Eureka, Illinois-based Crane Equipment Services unit of Columbus McKinnon Corp., also questions whether the Obama administration has taken the right approach to stimulate the economy. “I wonder whether it would have been better to give money directly to the people and businesses (such as through tax credits) than to spend money through government channels, as it is currently doing. We want to see a large amount of funds hit the street and have an impact, and I personally believe that a direct approach versus a government spending one would have been quicker, more direct and would have gotten the economic engine moving faster.”

The problem, according to Dana Andrews, vice president of industrial cranes sales, US, for Konecranes Americas, Springfield, Ohio, is that until the market creates demand, things won’t turn around. “No one is currently spending money – tax credits or not.” 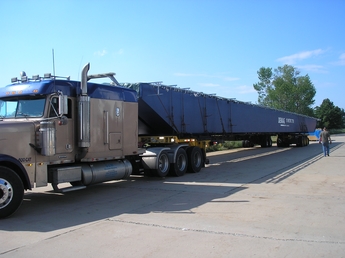 That isn’t to say that the current governmental actions aren’t and won’t continue to have some impact. “Some of the aspects of the economic stimulus package are likely to help our industry, either directly or indirectly,” says Al Romig, sales manager – North America for Demag Cranes & Components, Cleveland. “The suppliers of infrastructure products – suppliers of products that go into roads and bridges – are good markets for us. The more business they have, the more business they give the materials handling industry. We haven’t seen it yet. Some of the so-called shovel ready projects are still going through the bidding and contracts process. We haven’t seen orders yet, but I think we will see some in coming months,” he says.

Romig says these orders will not likely be for steel mills. “Steel producers appear to have plenty of capacity right now. It will be a while before they look to invest in expansions. The business is likely to come from a little further downstream, such as from service centres, warehouses and processors on the steel side, as well as from concrete suppliers.”

There has actually begun to be some increased activity for cranes for government and government-related work, says Dave Weller, vice president of operations and engineering for Mazella Lifting Technologies, Cleveland. “From the government side, the economic stimulus programme is having some success, especially for anything energy related. There are a lot of rumblings about wind and solar energy. There are definitely certain opportunities there that we hadn’t seen in the past.”

The government money has also increased the amount of business for certain municipal projects, such as wastewater treatment plants and even nuclear power plants, says Astafan, noting that his company is now focusing a little bit more on these municipal projects than it had in the past, “although I don’t think it will ever become a huge part of our business.”

While more governmental work is opening up, DiCesare says that with everyone going after this work, it is now becoming more competitive. “This is something that we are definitely pursuing. While government work takes a long time to generate and to complete all the necessary paperwork, it is great work,” he says.

There is, however, a lot of waste with the government projects, observes one West Coast crane builder, for example, one project in the Northwest for the US Bureau of Reclamation that involved having large cranes rebuilt with air conditioned cabs even though they are to be used in a climate controlled building.

“While I’m sure that there are a lot of viable projects, I’m concerned about the number of projects that are just not worthwhile,” he says.

“The thing is that if you give a bureaucrat money, he will spend it even if there is no or little value to the project. It is pretty obvious that they are just printing money. But what they are forgetting is that this money needs to be paid back sometime. It will create an enormous debt for our children and grandchildren.”

He says: “Don’t get me wrong. Our company is aggressively going after government projects, but we would like to see that they would have some kind of lasting value to our country and not be just spending for spending’s sake.”

While government work is one of the few bright spots for crane builders right now, Astafan says that he does not see it taking the place of private activity.

“I don’t see it as a long-term solution to our economic problems,” he says.

Right now, however, private sector demand has been quite slow, he says, largely because of the financing problems that continue to plague the manufacturing sector. “I think there could be a fallout on the part of weaker crane players because of this,” Astafan says. “We need to be careful who we extend credit to. There is concern that some companies could go bankrupt. It forces us to tighten our credit. It could slow things down further. Everyone seems to be more cautious.”

Romig also observes this. “The availability of bank loans are definitely holding some projects back,” he says. “There is also a lot of uncertainty in many markets. Companies want to be sure that things are starting to improve before they commit on any capital investments.”

“I think there is some phony optimism that the recession is ending, but I don’t think it is ending,” says Bayerlein. “I think it will go down again and that 2010 will be a horrible year for both manufacturers and for crane builders.”

Also, Romig says there needs to be a more consistent energy policy. “If there was more certainty about the policy for offshore oil and natural gas exploration, it would definitely help our market.”

Despite this, Astafan says that he is starting to see some “sparkles” in activity in the private sector that hadn’t been seen in a number of months, although he admits that there continues to be more quoting activity than actual orders. “People are being very cautious.”

But there are some positive signs from certain sectors, for example, Weller observes that some steel mills are “firing up” idled facilities – partly because of increased automotive business with the successful “Cash for Clunkers” programme. One example is ArcelorMittal’s Cleveland Works.

In general, it is seen that business is close to the bottom now and could even get better as we go into the New Year, some say.

Bayerlein is less optimistic. He says: “We need for the market to get back to where it was in the late 1990s and the early 2000s and I don’t think that we will see that until 2011 or beyond – especially if the government adds on a carbon tax. That will decimate industry.”