High-capacity lifting is in ever-increasing demand. Julian Champkin looks at the market for hoists with capacities of 5t and above.

High capacity’ is an overused phrase, but we recently delivered a 10t capacity crane to lift elephants at Atlanta Zoo.” So says David Comiono, vice-president and general manager of lifting equipment makers EMH of Ohio. The average adult male African elephant weighs in at between 2.5 and 7t. High capacity hoists, in the context of this article, refer to anything from 5t up to 500t. So elephants qualify.

It isn’t all elephants. “We have supplied high capacity cranes for nuclear installations,” says Comiono. “We have a large mining project just now. There are steel applications, energy applications, and we have some government work which is always interesting. Other large areas are coil handling, and this year the pre-cast concrete industry, which has been busy on several large infrastructure related projects. “There are quite a few mining projects: mining tends to go up and down unpredictably but generally there has been plenty of demand for largecapacity lifting apparatus in recent years. It is a broad base of industry that needs them.

“One reason is the tendency for manufacturers to make bigger units in their factories, pre-assembling them there to eliminate assembly-work in the field.”

“Class D is the US standard for many such cranes. It is an oversimplification to say that it is for heavy lifters.” So says Andrew Pimblett of Street Crane Heavy Lifting. “Class D is a service classification rather than a capacity classification,” he says.

Classifications from the CMAA (Crane Manufacturers Association of America) are based not only on the maximum weight that a crane can lift but on its average load intensity and number of lift cycles. Simply put, crane service classifications are established by how much weight the system will need to lift, and also on how high the materials will need to be lifted, and the frequency that the crane will need to perform those tasks.

Two cranes with the same capacity, span, and size can differ in the average load intensity and loading cycles. Class D cranes are designed for heavy service applications. As a guide, 50 percent of the crane’s rated capacity will be handled constantly throughout the workday and the crane will need to perform many lifts per hour. Class D cranes are designed to move loads quickly and are usually installed in locations where heavy equipment must be moved constantly. This service is often used for applications in heavy machine shops, foundries, fabricating plants, steel warehouses, container yards, and lumber mills.

CMAA classifications continue through E—‘Severe’—and F—‘Continuous severe’— service. “So as a generalisation Class D is the ‘in between’ classification,” says Pimblett. “It is the kind of crane that customers—and sometimes even sales people—get wrong. Because it is not just about how much it lifts; it is also about how often it does it. Once a day, or once a month or once a year—these need different designs of cranes. Bearings will need to be more robust, components longer-lasting, and so on. Class D cranes could be subjected to large loads, but only infrequently would they be lifting to their maximum capacity.

“That having been said, people very rarely get their requirement for a light duty crane wrong, or for a very heavy duty crane wrong,” he adds. “In the middle range, they can do. They can get too light a crane and pay for it with a shorter working life from it, or they go for an over-specification crane and pay too much money for it. It requires good understanding of engineering, which some customers may not have.”

“As companies expand their manufacturing facilities, they want assurance that their equipment is going to withstand continuous use,” says Elyssa Baker, marketing director of GW Becker, echoing the same point. “The also want to know that their new equipment will work with their existing equipment seamlessly.”

Pimblett of Street Crane again: “Happily, nowadays with software and better specification there is no need to get it wrong. Designing these cranes has got easier.

“In my early days at Street—and I have been here 28 years—these heavy cranes would require bespoke designs. Designing one for a client used to be a mini-project of its own. Now we have algorithms that will factor in all the frequencies of use and how often the crane approaches maximum capacity. The software does the drawing. Like a game of chess, where a few different possible moves rapidly gives millions of possible positions on the board, so it is here: the various capacities, frequencies, speeds and the like combine in theory to produce around 16 billion different designs of cranes. Of course we haven’t actually produced them all, but we could produce any one of them that is needed. Designing heavier cranes has now become a process, just like designing a standard crane would be.

“It means that costs and delivery times have been much reduced; so has the risk of getting it wrong. 80% of Street Crane sales go outside the UK, and we supply components to other manufacturers who use our software.”

“Building a high-capacity crane usually entails more than just scaling up a smaller one,” say EHM’s Comiono. The reason is that a high-capacity crane may be absolutely vital to the company’s operations. “Clients tend to want gingerbread added, safety and automation and control devices that make it a bit more complex. So it is very common to want load cells with digital displays that show its lifting history and what it is currently carrying. Remote control is just about standard on everything these days, big or small. And reliability is key. If a smaller crane fails you can bring in another or have work-arounds; but if a plant needs a heavy-lifting crane, that equipment is likely to be the only one there is at the site and very central to all its operations, so they will need it to be absolutely reliable. A power plant that has one 200t crane to remove its turbine will want to be absolutely certain that the crane will work when it is needed.

“Usage is a factor. The power plant gantry crane might be used once a month; a similar high-capacity crane in a shipyard gets much more use, and sometime abuse, as well. So it will need heavier bearings, different drum to rope ratios, and so on. We follow CMAA criteria. The application will drive the design.

“Faster speeds are becoming more demanded. It used to be that 4 or 5 feet a minute was good for a 100t crane. Now 10– 15 feet a minute (3–5m/min) is standard, and that of course calls for greater power. People want anti-collision devices, by laser or infra-red, and usage monitors to record the cycles and hours so that maintenance can be planned. The Internet of Things is coming in, and my guess is that it will apply to heavy lifting gear as to everything else.”

GW Becker is currently working on several new projects that will use heavy duty systems. All are Class D cranes, and are going to be used in a number of industries and different applications. Oil and gas, speciality metal facilities, glass manufacturing, forges, aerospace industries and transportation facilities are among them.

“One example from this year is for a glass manufacturing equipment company,” says Baker. “It included a top-running double girder crane. This crane is a Class D crane with a span of 40ft, bridge speeds of 300 ft/min (90m/min) and trolley speeds of 180 ft/min (55m/min).

“A forthcoming project is for a forge company, who have requested a 20t toprunning double girder Class D crane with a span of 30 feet (10m) and 17 feet (5m) of lift for continuous daily use in their facility.”

GW Becker has recently designed, manufactured and installed a new 15t top-running double girder crane for a locomotive refurbishing facility. This custom ‘built-up’ crane has a span of 77ft (23m) and a lift of 35ft (10.5m). “This crane was the first of five new cranes we installed in this facility. They are used to assemble and disassemble locomotives,” says Baker.

“These crane projects are unique because they require special components specifically created with spark resistant features that adhere to stringent safety guidelines in explosive atmospheres. Also known as Hazardous Environment Cranes, this equipment requires the use of special materials such as copper, bronze, and stainless steel.

“Over the past few years, GWBI’s involvement in the oil and gas industry has consistently grown. We have noticed also an influx of steel mills which are revamping their safety standards and regulations. These revised standards apply to new projects, but are requiring the addition of new safety systems, such as collision avoidance and fall protection on existing equipment as well. That may be why in recent months we have noticed a higher demand for reliability, safety, remote telemetry and ease of diagnostics for fault diagnosis and feedback, and commonality of existing components.

“The heavy lifting sector continues to be driven by the oil and gas industry, and by speciality metal plant expansions, new construction projects and aerospace industries. It is performing at or slightly above the projected market trends for 2019/2020.”

Kuli are also involved in heavy lifting. Moving of prefabricated concrete building elements, says managing director Oliver Kempkes, is one area of demand. Chemical and paper industries and transport logistics ships—loading and unloading from road, rails and ships—have all sought their services recently. “Capacities and speeds are always demanded,” he says. “There is a tendency also to look for low-maintenance equipment. And ambitious customers are now focussing on ‘Total Costs of Ownership’ and reduced downtimes.”

There is another area of change: “Nowadays more and more customers also focussing on energy savings.” These are large cranes, with energy consumption to match; so small percentage savings can result in substantial absolute sums.

“Our answer on that is the new technology of energy recuperation,” says Kempkes, “which we offer together with frequency inverter driven motors. Energy from lowering loads and from braking is led back to the grid via regeneration units built into the control cabinet. No extra programming is necessary due to the fact that even the sine curve from the power network is detected, and braking energy is adapted and fed back accordingly.

“Moreover the system removes the need for brake resistors, which waste energy as heat, and, depending on the energy consumption, can be quite heavy. When calculating girder weights this additional load no longer has to be considered, which gives another saving.”

Overall, say Kempkes, requirements for demanding, more complex installations are growing and a rising number of customers are looking for individual and reliable installations:

“The building sector for example tries to reduce site works (which are expensive, slow and variable in the quality results) and therefore increases the number and dimensions of pre-fabricated parts. As industrial pre-fabrication is cheaper, and of repeatable and provable quality, the needs for cranes is changing, and that drives the business.

“Regionally, business is still heavier in the Middle East. Southeast Asia and Far East are doing well and business is developing.”

Those elephants at Atlanta zoo will probably not notice whether they are in recession or boom. They might, however, be surprised when they are first lifted into the air by a high-capacity crane. 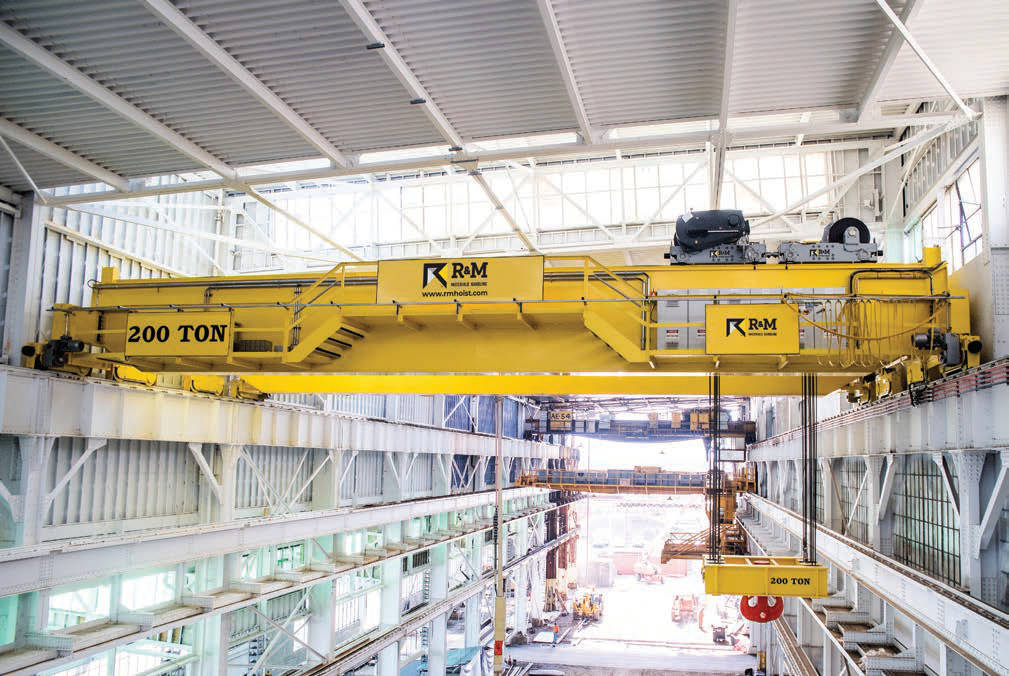 200t capacity from R&M is not unusual. 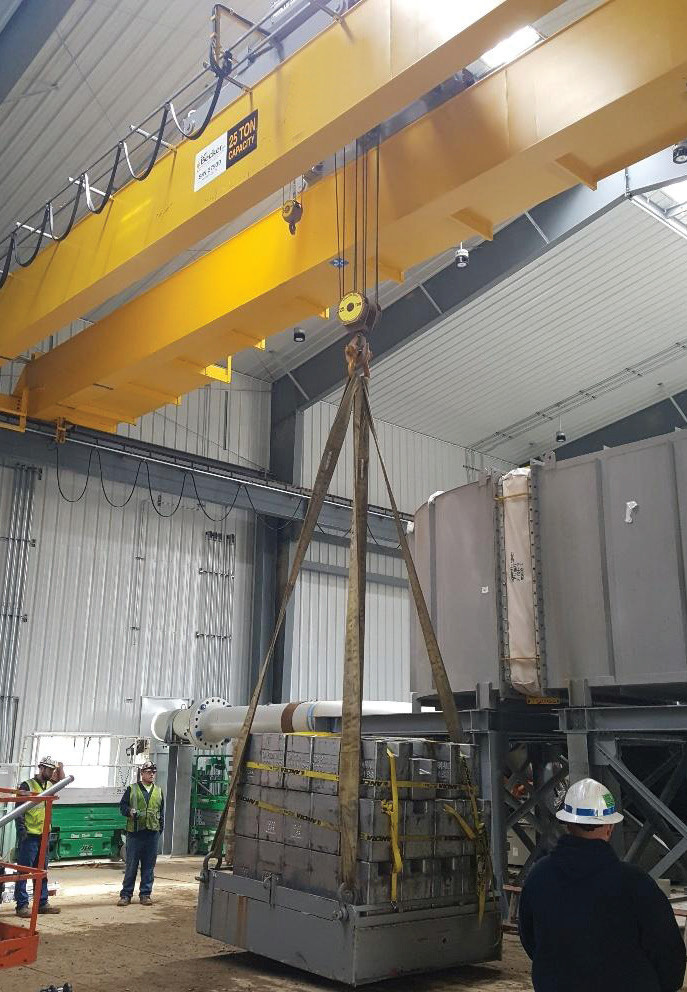 A class D hoist from GW Becker in action. 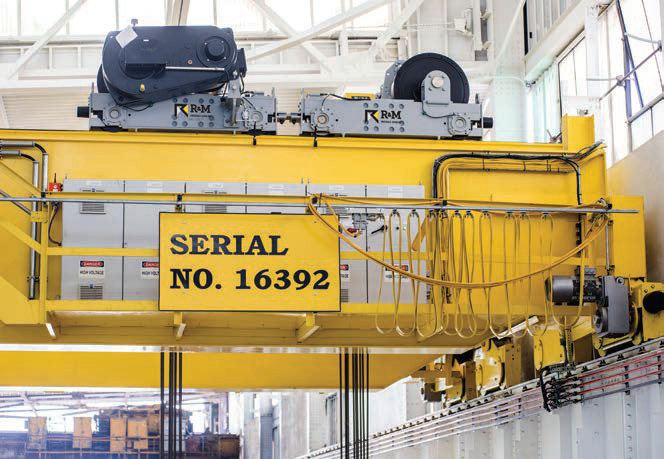 A heavy-duty hoist from R&M 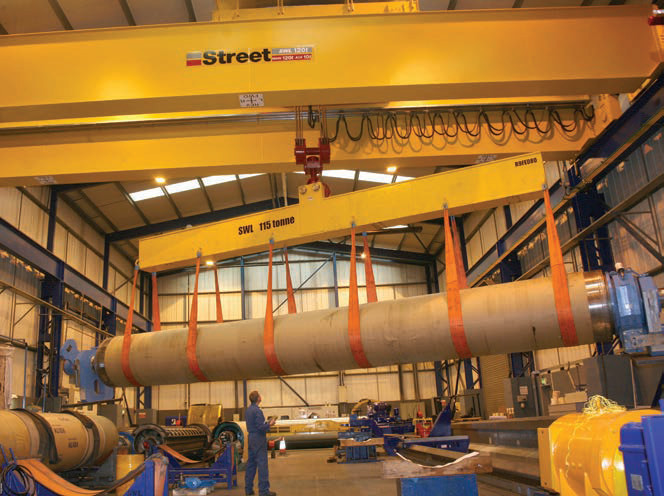