While Italy has had a torrid time like many in Europe over the last few years, for hoist manufacturer Misia a change of customer focus has meant steady business.

With Misia Italy's 30th anniversary in September fast approaching, it is clear that although still a fairly small operation, Misia is a stalwart in the Italian lifting industry.

Misia's sales and marketing manager, Marco Bertelli, is pleased with Misia's performance over the last two years, having increased overall sales from 2,348 units in 2010 to 2,501 in 2011, despite the ongoing decline of Italy's manufacturing sector and a construction industry so depressed investment levels have regressed to those of 1994.

Like many in Italy facing what the International Monetary Fund predicts will be a deep recession until early 2013, Misia has joined a wave of firms fighting to grow their export sales to ensure survival.

Explaining that Misia has begun to thrive during his time at the company, Bertelli says: "I started here two years ago and we were less than 20% export, and the rest was staying in Italy. Now we have achieved, on 31st December 2011, 53% export and the rest was Italy. I think we are still around 50:50 now."

Bertelli credits much of this to the firm's export manager, Sabrina Bellini. Of course this is not to say the change in percentages solely represents an increase in export sales but also the severe decline in domestic sales felt by all in Italy, especially smaller businesses.

Bertelli is also quick to point out that the division of its exports is telling of the fact that the rest of Europe is also having a tough time of things at the moment. 27% of Misia's exports are sent to Africa while Asia accounts for 20% and Europe is only 7%; these regions used to be in reverse order of importance to Misia. However Misia's relationship with its sister company FAS Italy, a Kito hoist dealer founded around the same time and in the same industrial area, but specialising in serving the high-end market for hoists and wire rope products, has helped to support the firm on many levels.

Bertelli says: "They deal a lot with engineering companies, Italian and international engineering companies, they're also doing exports through them, and they're taking part in one big project outside of Italy. They do the upper crust of the tenders that circulate. They do very specific items, whereas we pick up whatever is on the market and we push a lot on flexibility."

With a sister company already established as a supplier of the high-end market for wire rope products and hoists, Misia sources and stores all its wire rope from FAS, saving on storage costs while still guaranteeing short lead times from a supplier that is also a neighbour.

This also means it can offer all customers the guarantee that its products contain some top-quality components. "We don't deal with Chinese or Ukrainian ropes," says Bertelli, "we only deal with high quality ropes, European-made and Korean-made.

"FAS are market leaders in Italy for sure, and open the small business up to the international market."

Another way in which close proximity to FAS Italy benefits Misia because when last minute requests from the customer come through, for instance asking for a product with a longer rope path, one ten-minute stroll later Misia staff can carve it themselves. This association means that for a small company, with 27 employees working directly for Misia, the firm is still able to perform to international standards and reach an international audience.

As the division by end-user market for the firm's sales figures shows, quick adaptation to the prevailing market conditions is the reason for its survival.

While the core industries that Misia serves -- steel mills, paper mills, cement producing operations and even Italy's marble industry -- remain the same, the firm is finding itself taking the opportunities to tap other markets previously untouched.

For instance the lifting capacity range for Misia's product range of three hoists -- the M, BM and XM series of hoists -- is from 1t to 50t. For many applications within the shipbuilding industry these capacities are simply inadequate, but this doesn't stop Misia from searching out the niches in the industry that they can fill.

Bertelli explains: "The client portfolio is changing a bit due to the introduction of the crane kit. I am not saying that we go to the end-user because this is not true, but regardless of the nation from which the customer calls you from, it can be Saudi Arabia, it can be Pakistan, they come straight to the source now.

"No more supporting an intermediate engineering company, and that is not only for the spare parts but also for the ready-made hoists. They are more confident, and maybe they have tighter budgets which they need to respect and act within certain financial frames.

"So they go straight to the target, this is the biggest change, so you have to serve them. You have to get along with their habits in terms of documentation, which is not an easy thing at all.

"Dealing with an Italian engineering company wouldn't be so bad, but a company from Jeddah will be much more difficult."

Bertelli also explains that one of the main benefits of this approach is to get the message about Misia products out there amongst the end users, as word of mouth in this industry is indeed a powerful marketing tool.

While the crane kit is making it easier for Misia to serve customers who may not have the time or inclination to customise the cranes themselves, it also has the effect of slowing down production at Misia's factory -- instead of the 3,562 maximum production capacity of a few years ago- to deal with the extras that customers are ordering with cranes.

However this time difference comes in exchange for a gradually improving line of products with all the capabilities you would expect of top-of-the-line hoists.

Explaining the evolution of Misia's products from the M series through to the latest XM series hoists, Bertelli says: "The differences are the shape of the frame and the reduction gearbox, there are no big changes between the series. But the XM is the most developed one, and it's very versatile.

"It can host five different families of lifting motors, which gives us the chance to achieve different speeds and micro speeds.

"It tackles those markets where maybe the clients are not so skilled with electrical components, while still on the other hand serving the clients that have particular enhanced needs for speeds or variable frequency-controlled drive controls and encoders, let's say the electronic playground."

Despite the greater focus on international sales, Misia is still very much active in Italy, in fact one of its biggest customers is the largest energy provider in Italy, ENEL.

Its best-selling hoists are between 3t and 10t. However, through contracts such as these Misia is also starting to find more demand for its heavyweight range of 16-20-tonners. Its most frequent source of domestic work is likely to be in renewal or refurbishment, as local companies attempt to minimise new investments.

Bertelli says: "That's a demand, especially in Italy because nobody is building anything now. In Italy I can say it goes basically on renewal. Due to the kind of machine we have here, it's a donkey. Our machine, it never dies. We're still serving spares of hoists that were manufactured even in the 80s, and we're able to do that because they're simple and durable." 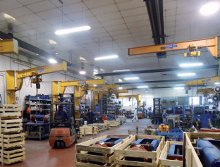 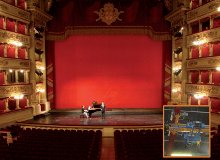