End users in the crane sector are demanding more efficient and cost-effective rope solutions: they need ropes that are hard-wearing, particularly for corrosive environments, and which offer impressive levels of tensile strength, with safety and usability features that reduce crane downtime. Lightweighting is also in demand in sectors such as offshore and mining, where vastly extended rope lengths, compared to most overhead lifting operations, enable lighter ropes to provide huge improvements to efficiency.

As such rope manufacturers have been upgrading both market-established steel ropes and more recently developed synthetic materials.

US-based Samson supplies land and sea markets with synthetic ropes, having recently developed its technology to be lighter and more durable.

The company’s Agile Lifting System— designed specifically for engineered lifts— is said to match the performance criteria of its other synthetic ropes, but with a form factor similar to round slings.

Samson says it has received positive feedback from customers for the technology, which takes advantage of high-performance synthetic material that has potential benefits when compared to traditional steel wire alternatives.

“All things being equal, steel wire will be cheaper initially, but it’s possible to realise other, longer-term savings using synthetic wire,” says Jarvis. “Firstly, you don’t have to lubricate synthetics, and they are also much lighter—so easier to handle with fewer safety issues such as fish hooks.

“When used in a corrosive environment, such as at sea, synthetic wire will not degrade as quickly and it also doesn’t bird nest, so cranes can be operational for longer with fewer stoppages.”

At present, Samson says that synthetic rope is about twice the price of non-rotational steel with lifetime cost comparisons varying based on use, care and application.

Improving the Lifespan of Steel

While manufacturers of synthetic ropes are improving their wares, so too are those in the steel rope business.

One means of enhancing the durability and longevity of steel ropes is to add a plastics layer between the steel core and the outer strands, which is said to give the material high structural stability and protect against corrosive environments.

Germany-based rope manufacturer Casar supplies a number of its ropes to the hoist and factory crane market, including the recently launched product Superfit, which is an extension to its range of ten outer strand ropes.

“We’re permanently investigating and working on new projects, as well as making new product developments,” explains Christian Schorr-Golsong, director of product marketing at Casar, which is part of the WireCo family of companies. “Casar sees itself as an innovator in the field of high-performance steel wire ropes for any crane application.”

The company says that benefits of Superfit rope include excellent spooling performance on multiple-layer drums, while it also enables higher rope tensile forces. It is generally used with high payload luffing ropes for mast and jib adjustments on crawler cranes and large mobile cranes, as well as for special spooling and indoor crane applications.

“We presented this at Conexpo Las Vegas 2017 and customer feedback has so far been very positive,” adds Schorr-Golsong.

“The basic version of this new product [called Superplast 10 Mix] is also very interesting for hoist applications. It was introduced and delivered to our first customer three years ago. At that time, internal tests under laboratory conditions had just been completed and rope was starting to be used on its first industrial and overhead cranes.”

“These have a load capacity of 63t with an offset of 44m, while the gripper size is 44m³,” says Schorr-Golsong.

“Together with the 38t ship unloader overhead gantry crane, ships of up to 250,000t in size can be unloaded at a total unloading rate of 4,000t per hour.”

Casar currently employs a mixed sales strategy for its ropes selling directly or via large distribution partners to OEMs. “It is always a question of providing the required service in a cost-efficient and timely manner,” says Schorr-Golsong. “In most cases, it is not just rope, but special end requirements are often demanded as well. This special assembly, often just in time, is crucial for our customers.

“Most of the hoist and crane manufacturers follow a tool-box principle and the final product can be built from many different components to meet the needed lifting capacity, reach or height.” As such, Schorr-Golsong says that rope diameter and length is determined by the customer just before installation, with Casar then reacting quickly to these needs. “With crane manufacturers, we are often involved from the beginning of the project, helping to define the best fitting rope and to also provide our experience and internal test results,” he says.

According to the company, which was formed last year following the merger of leading rope manufacturer Bridon and steel wire specialist Bekaert, polymers have been added to the steel rope to limit water ingress and improve durability.

“We continuously innovate and improve our products and services in close collaboration with our customers,” says Andreas Heinrich, global segment lead for cranes at the company.

“Following this merger, the combined company now has 363 years of expertise and a global manufacturing footprint supplying high performance rope and cord solutions to a range of sectors, including oil and gas, mining, and industrial.”

Bridon-Bekaert currently has 18 manufacturing locations and more than 20 sales and service centres worldwide.

“Developments and breakthroughs in one of the many industries we serve are usually the driver for new developments in the other sectors,” adds Heinrich.

Another recent launch is the company’s manufacturing lubricant Ultra—claimed to be one of the first eco-certified lubricants on the market. “We have met a key ecological challenge by making this product biodegradable,” says Heinrich.

Currently, Bridon-Bekaert sells directly to end users and crane manufacturers. “It is very interesting for us to learn from end users, but also from the specialists in the distribution channels,” says Heinrich.

“We learn both how to improve our ropes, and the services we need to provide to meet customers’ expectations. This might be technical and commercial support, product availability, price competitiveness, or added value services such as training.”

The company is currently working on projects with major OEMs, as well as global distributors, while Heinrich says there have been a few new developments at ports with some of the main container terminal operators.

“Since the merger, we have started some very interesting new projects, but most of them are still running field trails and data is continuously coming in,” he says.

As well as producing steel wire and hybrid ropes, Bridon-Bekaert has a dedicated product brand for synthetic ropes, called Scanrope.

“Earlier this year we invested in our footprint for synthetic ropes and we aim to fully develop this part of the business,” confirms Heinrich.

“Although synthetic remains a niche market for the hoist and crane sector at present, we have seen some growth over the last few years, and our aim is to offer a full product portfolio of steel, synthetic or combined [hybrid] ropes to our customers.”

Another company that recently unveiled a solution for the offshore market is MacGregor, part of Finland-based Cargotec, which announced that it is developing a fibre rope crane that will have a 150t safe working load capacity.

Called FibreTrac, the crane takes advantage of synthetic rope technology supplied by Casar’s sister company Lankhorst. MacGregor says the crane will be ready for testing during the first quarter of 2018.

“MacGregor launched its fibre-rope crane range in 2016 and, as part of demonstrating its capabilities to the market, we have entered into a programme to build, certify and validate the world’s most advanced fibre-rope knuckle-boom crane that the market has seen,” says Høye Høyesen, vice president of Advanced Offshore Solutions at MacGregor.

“The greatest advantage of fibre rope when handling loads in ultra-deepwater is that it weighs virtually nothing in water.

“This neutral buoyancy means that, regardless of the length of rope paid out, the fibre rope does not add anything to the load experienced by the crane. Cranes can therefore retain their full payload lifting capacity all the way down to maximum depth.

“This is in complete contrast to using wire rope, where the ever-increasing weight of wire paid out limits the load permissible in relation to depth.

“We strongly believe in the advantages that this technology will deliver for our customers. This is not just limited to payload, but also includes significant weight savings, rope lifespan and ease of maintenance, handling and logistics.”

The crane uses Lankhorst’s Lankodeep fibre rope made from DSM Dyneema’s DM20 XBO fibre that has a DNV 303 certification, which is connected directly to the crane hook using a socketed termination from Applied Fiber.

MacGregor says the technology will also be fully certified in compliance with DNVGL-ST-E407 (deployment and recovery system). “Compliance with DNV GL’s strict regulations should provide end users with even greater confidence in the long-term use of this technology for this purpose,” says Høyesen.

Based in the Netherlands, Lankhorst Ropes supplies a range of synthetic ropes to the crane market, including Lanko Lift S, which consists of 12 braided outer strands, also made of the high-tech material Dyneema.

The company says Dyneema results in a breaking strength equal to that of steel rope of the same thickness, while it is also claimed to be corrosion-proof and require no lubrication.

Lanko Lift S, which is bright yellow in colour, is said to feature a special coating treatment applied to the fibres to reduce interior friction and increase UV resistance. “Extensive tests have shown, even in very demanding working conditions such as CBOS-‘cyclic bending over sheave’ testing, that Lanko Lift S has a superior bending fatigue resistance,” confirms Andreas Schmeiss, senior vice president of Global Cranes at WireCo Worldgroup.

Teufelberger debuted the product last year and it is currently testing the technology, which it claims offers benefits of 80% less weight and 200% higher load capacities compared to standard steel wire. “We will officially unveil our test results, together with Liebherr, in 2019,” confirms Helen Leitner, head of marketing at Teufelberger. “So far the results have been very promising and we can’t wait to show these at the Bauma trade fair.

“We have manufactured synthetic ropes for decades, so this technology is not new for us, but soLITE was the first synthetic fibre rope for cranes. We are convinced that both synthetic ropes and wire ropes will play an important role for crane applications and we will definitely continue with further developments for both technologies. 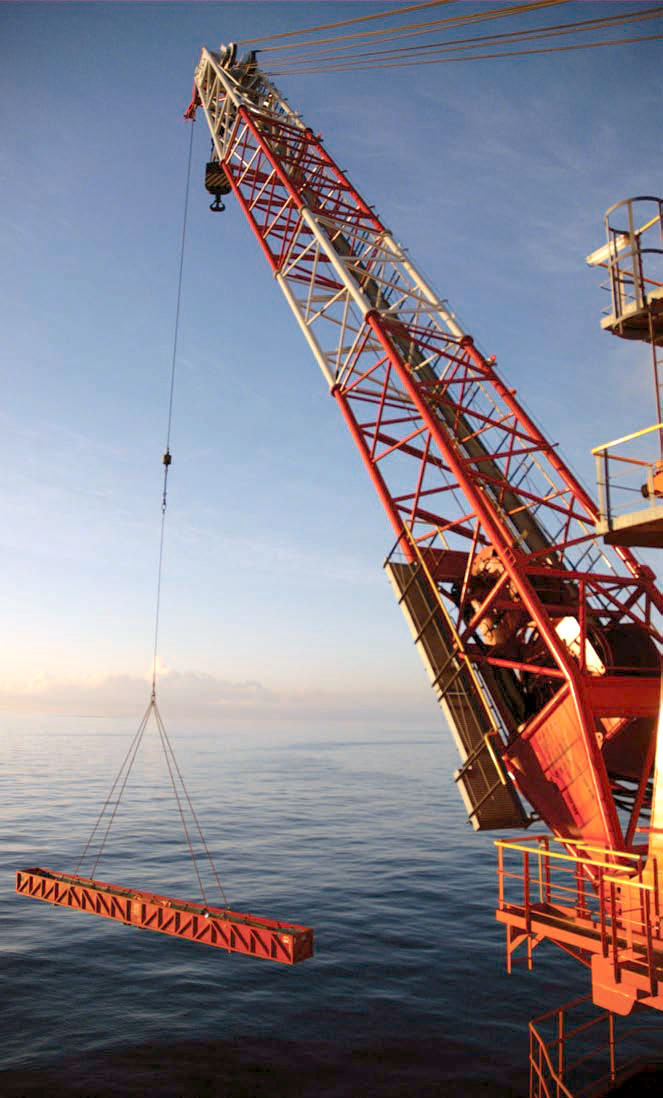 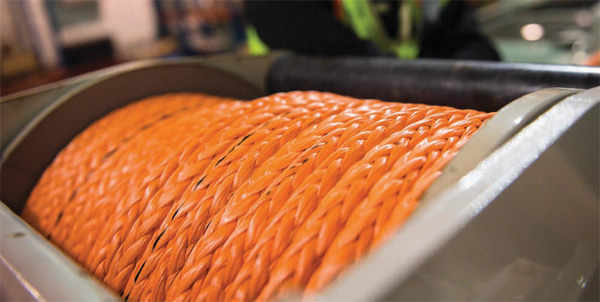 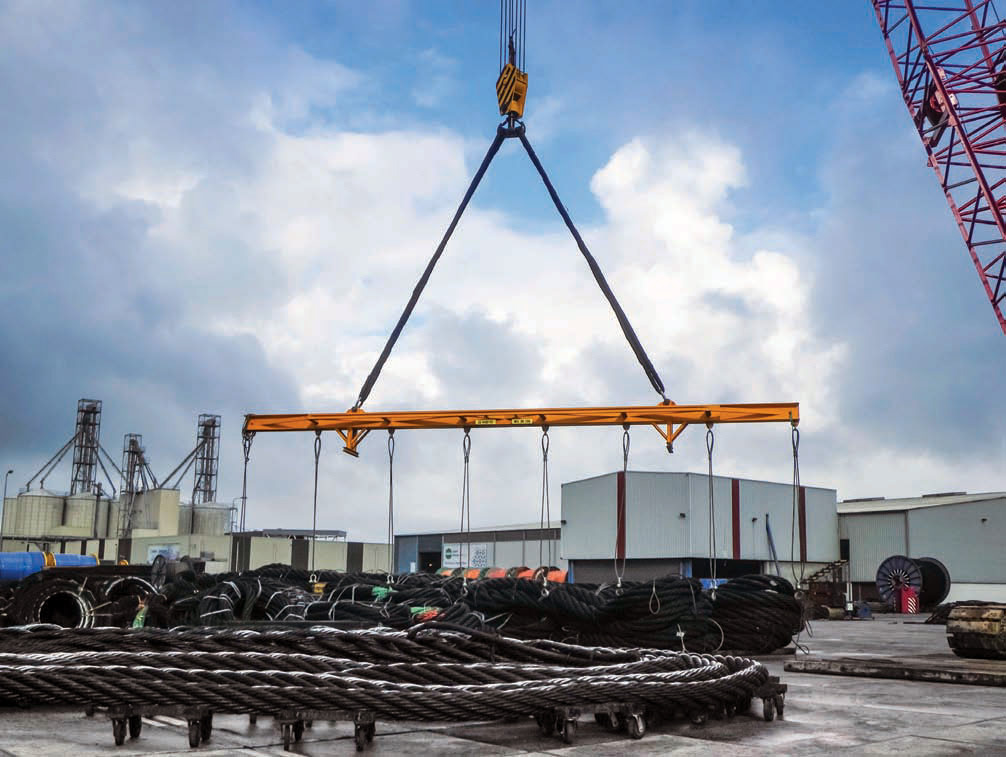 In the navy: Recent customers for Samson’s K-100 synthetic rope include the US Navy, which is using it at Pearl Harbor, Hawaii, and at its site in Newport, Virginia. 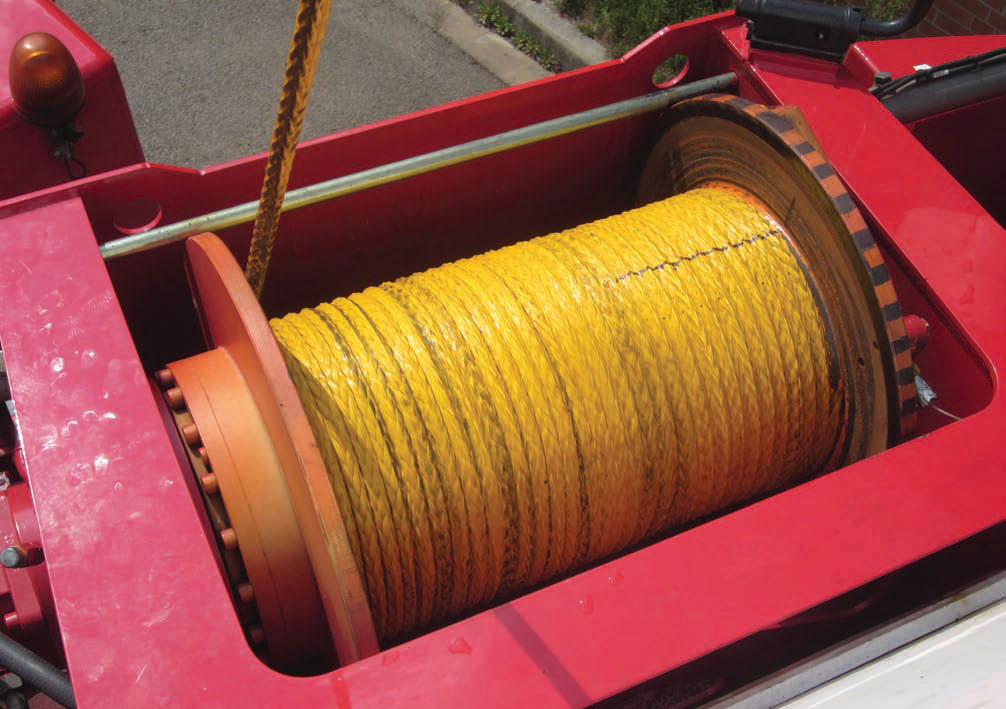 Lankhorst, the sister company of German rope manufacturer Casar, makes a variety of synthetic ropes, including the Lanko Lift range for hard-wearing applications such as off-shore or marine cranes.