Overhead hoists and bridge cranes come in all sizes, from workstation hoists lifting 250kg up to doublegantry cranes that can lift 200t or more. From 5–10t and upwards, hoists can reasonably be considered to be doing heavy lifting. The US Class D classification covers many such cranes. Typical uses are in heavy machine shops, foundries, fabricating plants, steel warehouses, lumber mills, and in bucket and magnet operations where heavy-duty production is required.

Is a big hoist such as a Class D simply a scaled-up version of a smaller hoist? Or do other considerations apply? “If we are talking about higher-capacity cranes based on weight alone, they are somewhat scalable,” says Brian Weidenhammer, engineering manager of South Carolina-based company Engineered Systems. “The size of the bridge girder is a function of the weight of the load and the span of the crane. However, if we are talking about the work capacity of the crane in a Class D situation, the crane has to handle higher duty cycles and possibly a higher percentage of at-capacity lifts. In these cases, component producers like Ingersoll Rand will have to provide higher-duty mechanical and electrical components.”

Mark Koski is North American commercial leader at Ingersoll Rand who, as Weidenhammer says, supply components to heavy-lift crane makers. “We call them our innovators,” he says. Heavier loads are part of his world. “A single-girder design can serve capacities of up to around 25t. If you are lifting more than that, a top-running double-girder or a box-girder is more suitable.”

But moving from one girder to two instantly involves a complexity leap: “And therefore it also involves an expenditure leap. There is a major price jump, easily two-fold, as soon as you look at two girders. So my advice to clients is if you are on a budget, and if you realistically can, then limit your lifting to 25t and save yourself money.

“And the other piece of advice I would give to a company wanting to install heavy lifting would be ‘Talk to your architect ahead of time.’ The reason boils down to headroom, because headroom is expensive. We get calls to put a hoist on a beam, and it is so much easier to mount the trolley to run on top of the beam. Of course we can supply lowand ultra-low-headroom units in all the power sources we offer—pneumatic, hydraulic or electric; but again, they cost more. It could well be cheaper to go for a standard-headroom hoist and raise the height of your roof to give it clearance! A heavy load such as a turbine may have to be placed in exactly the right position, down to the millimetre. “Speeds in heavy lifting are much slower. But a characteristic is that positioning is much more precise,” says Koski. “So you have variable speeds, with sensitive control and spotting visibility. It is not about automation; if you are lifting a generator worth a million dollars you want the skill of the operator and you want controls that let him the feel of his crane. You do though want remote control, because the operator standing under the load is a very bad idea.”

Demand is steady and increasing, he says. “The focus in this market is on customisation. Oil and gas are among the industries that need high capacities. Turbine halls need large-capacity cranes for maintenance. Those can be typical users.”

One of his innovators is Canadian company Hoisting Ltd. Andrew Phelan is their vice president, sales. “We are based in Alberta, outside Edmonton,” he says. “Heavy oil-sands extraction has been a major customer for us but we are gradually shifting our focus, still in the resource sector but towards products such as Liquefied Natural Gas. A massive LNG terminal is being built on Canada’s west coast to feed the Asian market, and companies like Petronas are using our services.”

He agrees with Koski that the client’s needs are paramount. “Lifting gear of these capacities are almost entirely custom-built, for that particular client’s needs. The first thing you need is a good understanding of the application. Here in Canada it might involve cold weather ambient environment, and any corrosive or explosive atmosphere and so on are only part of it. “Frequency of lift is important: is it a crane to be used once every few months for maintenance, or is it in continuous daily operation? Also important is the lifetime expectation: is the client expecting his project to be over in five years’ time from now, or is he looking for 50 years of service from the crane?”

And, like Koski, he says there is a quantum jump at around 25t: “In design considerations, 25t capacity is the turning the usual solution; above it you turn to box girder designs. There is little flexibility in an I-beam. All you can do is make it bigger, and over a certain size you would end up with it so heavy that you would need massive support structures underneath it. With a box girder design the fabrication costs will be more but it will take less material to construct it, which helps compensate for that.” “Single girder systems do have a limit in terms of capacity, span, and hook height,” says Mike Close, content manager of the Mazella group. “You will rarely see a single girder crane rated higher than 15t. With a double girder design, you gain the depth of the cross girder if the hoist is placed between or on top of the cross girders—providing an extra 18–36 inches (450–900mm) of hook height in most

complex in design, making the doublegirder a more expensive option.”

“Double-girder designs are standard from around 10t up,” says Hoisting’s Phelan. “You can make a 10t underhung hoist, but top-running is the general choice, as giving more compact designs. Common also is a smaller auxiliary hoist on the same trolley as the main one. So recently we have supplied a 55t main hoist with a 5t auxiliary on the same platform. They are over a compressor in a turbine hall. The 5t is used for day-to-day lifting: it is faster and easier to operate. The 55t is used when they want to lift the entire compressor.

“At this size also a lot of consideration goes into what is attached to the hook. I am not talking about the load itself here, but how the load is attached to the hook. A 50t load is not small. It might be delicate and much more valuable than the crane—such as that turbine. These are not objects that you would just wrap a chain around and hook up. So you do creative thinking, along the lines of customised spreader bars and the like. “Similarly, operability is given a lot of consideration. Large capacity hoists will be low-speed, but very precisely controlled. Speeds are low—you don’t want to race it with this kind of load; but you do want to position it accurately. So control is by variable frequency motors: like a gas pedal in a car they give infinite gradations of speed.”

“Certainly variable-frequency drives are replacing controls across the industry,” says Engineered Systems’ Weidenhammer. “There is some interest in semi-automated or load positioning controls but most of our cranes are still operator controlled.”

“They are almost always cab driven or by radio control,” says Phelan. “There is no safe position for an operator to do pendant operating. Automation is not so much in demand in these applications— those are more wanted in highproduction situations. These lifts trend to be one-offs, each one different; so they use skilled operators for individual lifts. The one high-capacity application where automation is used is in tandem lifts, where you have two high-capacity cranes working together on a single load. They need to be in perfect synchronisation, and there digital control comes into its own.” And he agrees also that consultation from the very beginning is vital. “In constructing these cranes we find we have to work early with the building and project engineer. That helps to avoid the volume envelope getting lost. Cranes like this will have a wheelbase of five or six metres, so at each end of the run there will be a space next to the wall where the hook cannot reach. So you ask the client: ‘Where exactly is the pick-up point?’ It would be annoying if it couldn’t be reached. These minutiae are important even if they are annoying: we can scrabble and change things at the eleventh hour but it is better not to, and the client will appreciate the attention to detail nine months from now when the crane rolls out and works as it is meant to do.”

Overhead crane manufacturers Whiting of Illinois echo the point about detailed knowledge of the crane’s application and planned lifetime. “Far too many companies are under pressure to get new cranes up and running at the lowest cost and in the least amount of time,” says Jennifer Pasek, their marketing manager. “But what needs to be addressed is proper understanding of the physical conditions the equipment will be subjected to. How the equipment will be used is critical: the specifications alone may not address your operations and special conditions. Purchasing needs to rely on expertise from the designer to determine what is really needed. The total cost of ownership over the life of the crane should be a driving force when making the final decision.

“One of the major electrical components is the motor design,” she says. “DC power is still heavily in use in mills, but DC motors are getting tougher to come by. Most are actually a remanufactured design. When selecting motors, taking into account the most severe repetitive duty cycle and environment for each motor. Another industry trend has been to make motors smaller and more efficient with smaller frames, requiring class F insulation and use of a fan to maintain its rating at 40° C.” And, on control systems, another consideration arises: “One point that is not addressed in the specifications is with radio operated cranes. Because the operator is not physically attached to the equipment, those cranes are inadvertently abused a bit more. This roughness is not accounted for in any of the specifications.”

“This year we have provided Class D cranes to steel service centres, both heavy duty and light duty machinery providers, automotive suppliers, and several facilities with injection moulding processes to name a few,” says Weidenhammer. “These markets still seem to be healthy although there is a noticeable cautiousness, and sometimes delays, in actually placing orders. The aircraft industry is certainly down in our region.”

Elyssa Wiesen, marketing director of G.W. Becker, in Pennsylvania: “We have recently worked with customers in the coil processing, heavy fabrication, and forging operations sectors.

“New capital equipment purchasing has been slowed considerably due to the onset of Covid-19 but we are still seeing high levels of activity in our service and repairs department. As customers hold capital expenditures close and ride out the pandemic, more service and repairs are required.

“There is some light at the end of the tunnel as we are seeing activity picking up and pointing to release of spend toward capital equipment. It is still not clear when this will return to any levels of normality but we are optimistic that the challenges of Covid-19 will soon ease.” 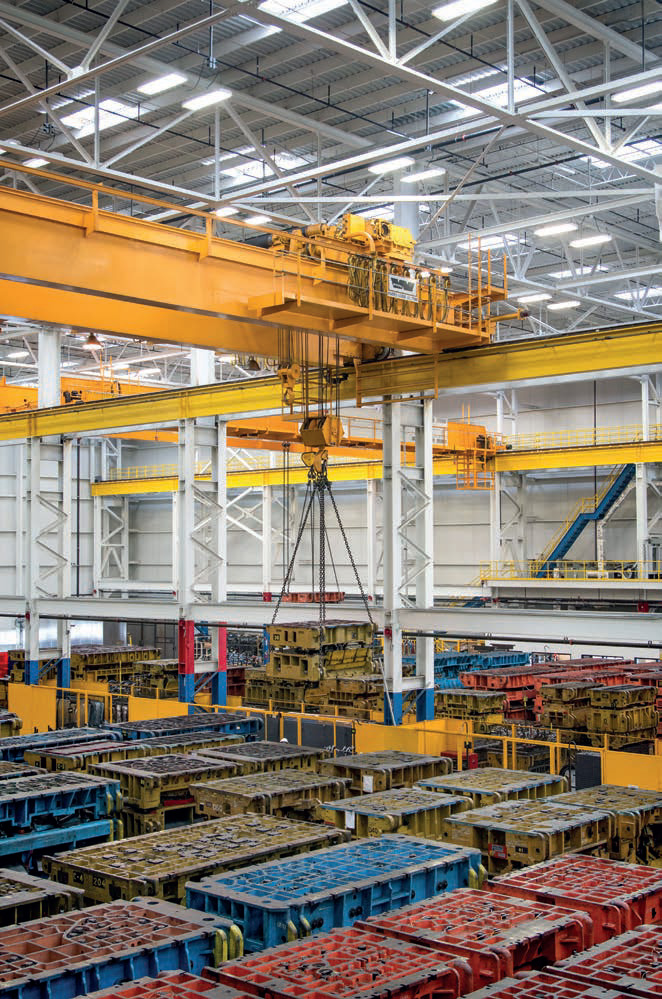