From a single and double-girder gantry crane to a semi-Goliath and the ‘Tears of Malmo’ – Julian Champkin discovers there’s a lot of benefits to using overhead gantries.

There is also a hybrid between the two, an overhead crane at one end and a gantry crane at the other, which has a bit of an identity crisis but is hugely useful and is called a semi-Gantry. Now that that is out of the way, we can proceed.

Gantry cranes come in all sizes. The shape, though, and even the proportions, stay much the same. From the hand-pushed frame on castors that one-man auto-repair outfits use to lift a 250kg engine from a car to the huge behemoths that tower over shipyards and can lift 800 tons or more, they are, as we have said, basically a beam on legs. The design is almost infinitely scalable. Which, in itself, is an indication that it is fit-for-purpose.

Andrew Neill, chief engineer of Street Crane, has been designing gantry cranes for years. “One of their many benefits is that they are economical to build,” he says. “The rails for a standard overhead crane in a factory or plant have to be supported on the walls of the building or on some kind of steel structure. If you are outside and your overhead crane needs a raised-up structure for 300 metres of running, that adds up to an awful lot of steel,” he says. “But a gantry crane doesn’t need a building or a structure. You just need a couple of legs at each end of the beam and they can run along the floor. In raw materials alone that is a saving. It’s a massive reduction in the resources you are using.

“It also means that wherever the crane can run you have nothing to get in the way of other operations that you might be carrying out. For any customer who wants to keep their floor space clear, their delivery trucks, forklifts and the like can run unimpeded without having to dodge support columns. There’s a good number of benefits to using gantries.”

Most, though by no means all, gantry cranes are outdoor machines, where they give access that is particularly unobstructed. “In terms of the natural footprint of the crane, gantry cranes tend to be larger than a standard overhead. “The ‘feet’ of the crane, the carriage wheelbase, takes up space – a necessity for providing stability: the longer the wheelbase the more stable your gantry crane will be. Inside a building you might find that that is an issue: your approaches might not be as good on long travel near the end walls. But you have gained floor space elsewhere. It is a case of working out where you want to gain and where you can afford to lose. “Outdoors, those end-of-run constraints are not so important. “And of course, indoors or out, these cranes can deliver to anywhere within their rectangle footprint,” adds Neill.

The forces and stresses in a gantry crane are reasonably straightforward - except at two points: at each end of the beam where legs and beam meet. “That is a critical point in the design,” says Neill. “That connection has got to be exactly right or else the structure just doesn’t work. So that is where we concentrate our design effort.” At which point the similarities with an overhead crane reenter: “We have developed our own set of calculations spreadsheets. We have those for overhead cranes as well; but since I’ve been at Street Crane we have designed what I call the Goliath add-on, where we can take an overhead crane design and start adding in what would be required if we want it to be a Goliath structure. On top of that we use structural analysis software as well, so if we have got a big special Goliath structure we can model that within the software and see where all the maximum stress points are and look at them under the worst possible load cases. So we can design an efficient and economical structure that way. We’ve got some pretty powerful tools to allow us to get some very good designs.”

We mentioned the semi-Goliath earlier. Neill is a fan of the design. It offers, he says, the best of both worlds. It works both indoors and out and is ideal in the not-uncommon situation where an assembly building has a storage yard running along one side of it. “You take advantage of the building structure to support one end of the travelling beam, and you run the other on a set of legs along the floor. Again, you get uninterrupted floorspace; and it is not always necessary even to have rails set into the floor.

“We offer various different wheel types. On our smaller-capacity cranes we can offer polyurethane wheels, which have a steel hub with a plasticised outer rim. You can run them directly on a concrete floor, so you don’t need any rails on the bottom level,” says Neill.

Street Crane has been a pioneer in these. They can work, he says, on cranes of capacities of around 10 tons. “It depends on the wheel loading, which in turn depends on the span of the crane and its structural weight as well as the load that it is to carry.”

A typical use is in tunnel construction, marshalling the concrete lining segments or lowering sometimes-extremely-heavy machinery down access shafts. Thanks to their long bridge lengths, of up to 250 meters, the Goliath is capable of spanning large areas, such as ship-construction docks. That, with their truly massive lifting capacity – of up to 2,000t in some cases - makes them ideal shipyard cranes. As hulls and offshore platforms become increasingly larger, and the prefabricated components to be mounted on them get ever larger and heavier, the cranes too get bigger. Many tower above their yards and cities and become iconic and well-loved landmarks. A 1,600t gantry crane at the Hyundai Heavy Industries shipyard in Ulsan, South Korea, was moved there after a long service in Sweden and is known as the ‘Tears of Malmo’ crane, because the citizens of that city are said to have wept when it left them. Two-trolley systems, with a large and a smaller one travelling independently on the same beam, allow them to rotate large components, and modern digital controls can give pinpoint positioning of loads.

A peculiarity of large gantry cranes is that they are asymmetrical. At one end the leg is rectangular. At the other it is frequently a slender A-frame. The reason comes down to size and thermal expansion. The beam is so long that it expands by a significant amount in warm weather. The rails on the ground stay a fixed distance apart. The discrepancy would lead to unacceptable stresses and wear on wheels, rails and structure. The A-frame legs are therefore hinged at the top, where they meet the girder, which eliminates that effect.

Konecranes, among others, offer both single-girder and double-girder designs. A single girder has two advantages.

The first is that it uses less material, and therefore weighs less, meaning lower investment costs. The second is again a consequence of the long beam length. When one of the girders is warmed by the sun, it expands more than its shaded neighbour, bringing unwanted stresses and deformations. A single girder conducts heat from its sunny to its shaded side, equalising the temperature and removing that bending effect. 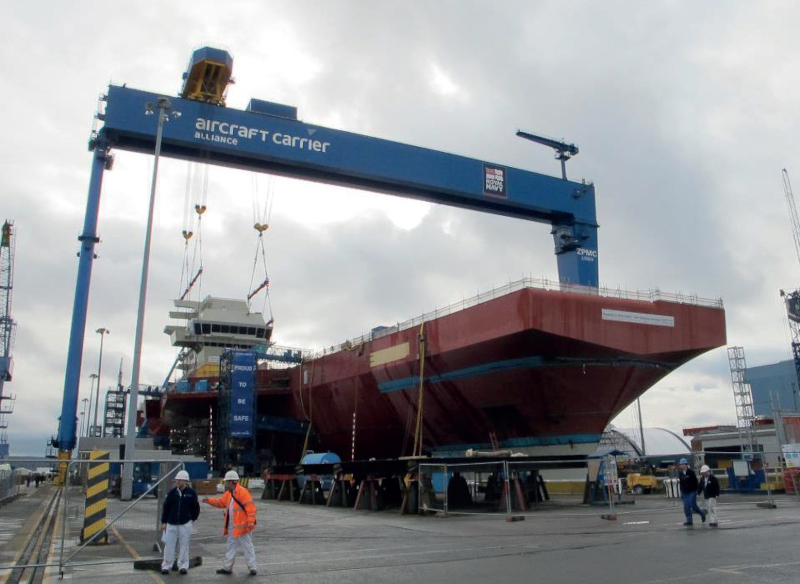 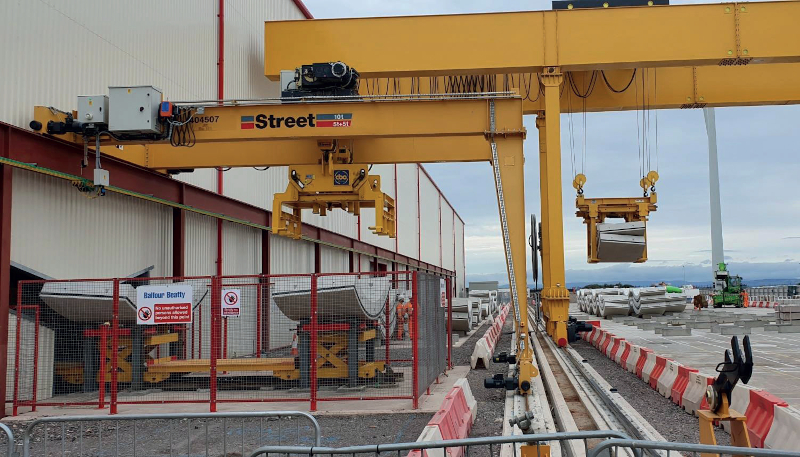 A gantry and a semi-gantry, both by Street Crane, working together at Hinkley Point nuclear power station. 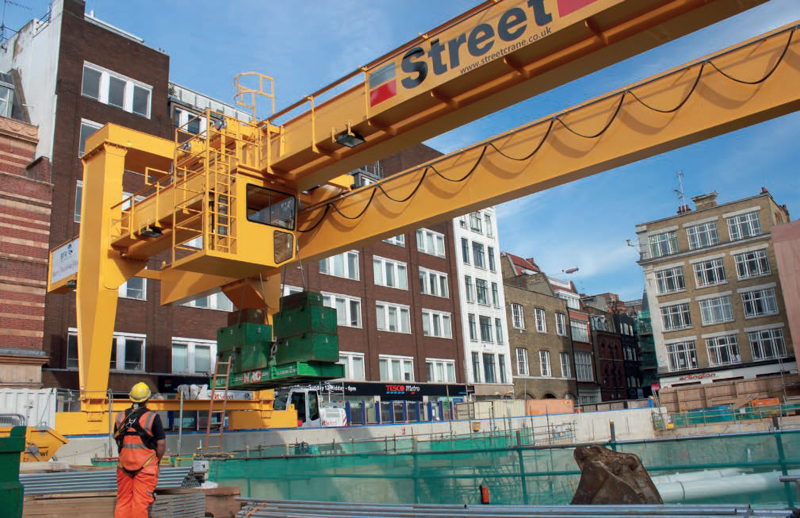 A Street Crane gantry at a Crossrail site, London. 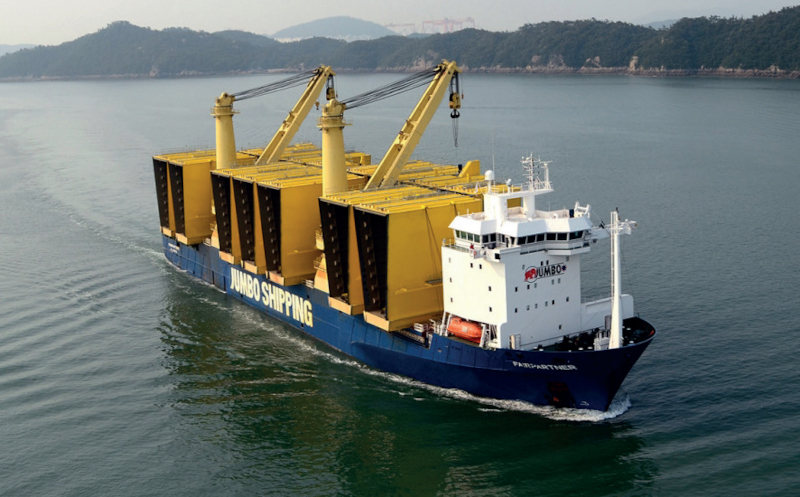 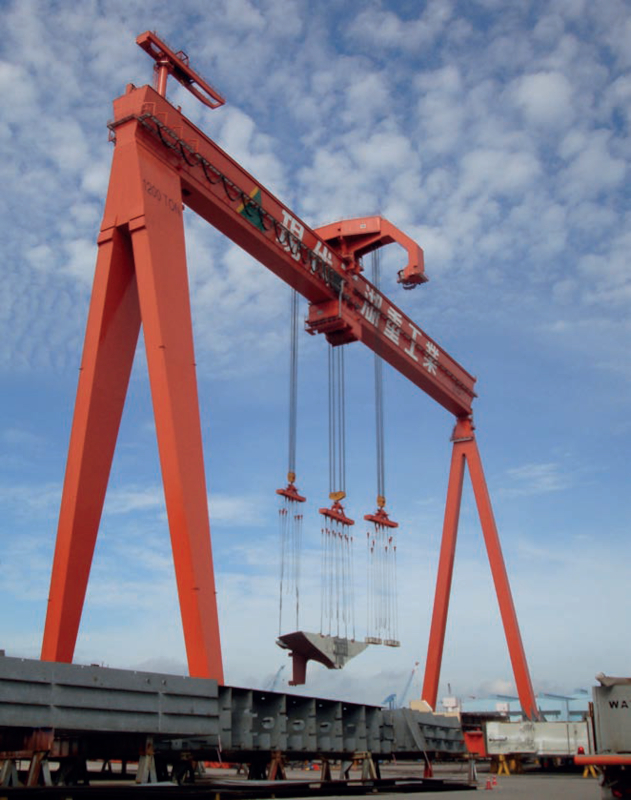 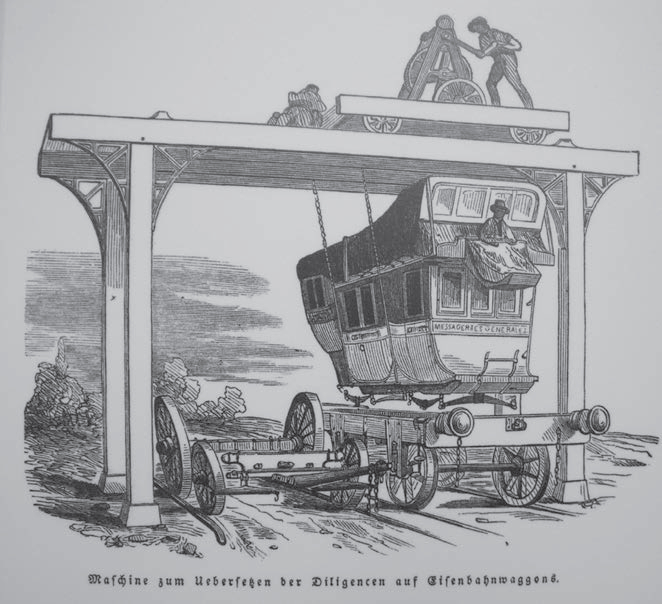 Intermodal Gantry cranes are not new: a stagecoach being transferred to a railway wagon, France, 1844