Exhibiting at the show...

With the twelfth annual CeMAT Asia exposition fast approaching, Hoist Magazine gears up for an impressive show in the even more impressive city of Shanghai

Gorbel
At this year's show Gorbel will be showing what is a relatively new product to the Chinese market, it's G-Force series of intelligent assit devices. Originally released in the USA in the year 2000, it has been sold in China in since last year.

Gorbel says the G-Force range is ideal for applications requiring precision placement of loads such as machining or assembly lines. Capable of changing its operating speed to match that of its operator, Gorbel G-Force IADs can achieve a maximum lifting speed of 61m/min.

Designed to a safety factor of 5:1 that the company says sets a stringent deflection specification for its runways and bridges, the G-Force can be used for high frequency lifting. The system's modular design lends itself to flexibility during installation, modification or relocation.

The hoist drive is available as a dual-speed or speed-controlled version. The dual-speed version is designed to be a compact, mountable drive, and as such it supports the rope drum on a hoist directly with the output shaft with no other mounting components needed.

A three-stage aluminium parallel shaft gearbox directly coupled to the drum allows smooth speed shifting via a splined output shaft - which complies with DIN5480 - and high-grade helical gearing that extends its working life while reducing noise.

This is despite the GH 40000's 5/20kW asynchronous cylindrical rotor motor's high starting, pull-up and breakdown torques during operation. While the dual-speed version achieves hoisting speeds of 2.6m/min, 3.3m/min or 4.2m/min, with a 405mm drum diameter and using 6 to 1 reeving, the speed-controlled version achieves higher speeds of 4.9m/min, 6.2m/min and 7.6m/min with 4 to 1 reeving.

Featuring a 38kW motor fitted with an encoder feedback, the high output speed controlled GH 40000 offers even closer control for the user.

With each drive's acceleration and deceleration ramps easily customisable configuration, the smoothness of the unit's torque transmission can be maximised as per the application to reduce sway during handling to allow precision placement.

For both hoist drive versions dual surface safety brakes, fitted with fast excitement rectifiers, help to reduce vibration during braking. The brakes are fitted with wear limiters and can act as a fail-safe, automatically holding in the event of a power failure.

Eurocrane
Thai lifting equipment manufacturer Eurocrane is also a leading distributor of Verlinde cranes and hoists, along with the full Airpes product range, and will feature a wide selection of these on its stand at CeMAT Asia 2012.

Verlinde products on the stand will include the Eurobloc VT series, identifiable by its large drum diameter, which the firm says extends the rope life while reducing track widths and hook approach distances. Eurobloc VT electric wire rope hoists can lift between 10t and 250t.

For smaller loads, Verlinde's next generation Eurochain VR electric chain hoists are designed for loads from 63kg to 2.5t. Equipped with safety precautions compliant with the machinery directive, including limit switches, a punch-type on/off switch and a torque limiter, Eurocrane says all models in the series are 25% quicker than the previous generation of VR chain hoists.

In addition the Equibloc Air range of air balancers, the Eurosystem ALU aluminium rail handling systems and Eurocrane open winch type EW will also be at the show. 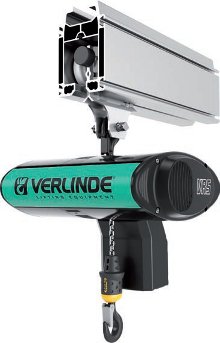