Advanced DC drives from Missouri–based Emerson Control Techniques have been selected by Terminal de Contenedores de Yucatán (TCY) to modernise the control system on an ageing ship-to-shore crane in Progreso, México and bring it back up to speed.

Seven years later, keeping the cranes operational had become difficult due to increasing downtime and escalating maintenance costs. David Asensio, Project Manager for Grup TCB, commented at the time: "The cranes are in good mechanical condition, but poor electrical condition". Replacement parts for the old DC drives had become nearly impossible to find and could take weeks to obtain, leading to unacceptable downtime.

David Asensio said: "After reviewing the competition, we decided that Emerson Control Techniques has the best DC drive. The Mentor MP DC drive has a rugged design that is easy to maintain, a matter that is sometimes not taken into account. For us, Emerson is the right solution."

This Emerson Control Techniques solution provides TCY with a higher degree of reliability to increase uptime, a rapid supply of spares and remote monitoring and diagnostics to facilitate troubleshooting and maintenance.

The Mentor MP is a reliable, flexible and powerful digital DC drive designed to maximize motor performance, enhance system reliability and interface digitally with the latest control equipment using Ethernet and a wide range of industrial networks. This makes the Mentor MP an ideal solution for modernizing port cranes and equipment.

The operational parameters can be selected and modified from the drive keypad or through the Windows based software CTsoft. The SM-Application module is an easy plug-in second processor, capable of writing application specific programs without needing to use a PLC or stand alone controllers. It is programmed using SyPT, an IEC 1131 compliant programming tool incorporating function blocks programming.

The SM-Application modules of the two drives that operate the hoisting motors and connect via Control Techniques' own high speed network CT-net, use a load balancing function to control container hoisting and calculate the maximum lifting speed as a function of the load hooked to the spreader. With the spreader empty, the SM Application modules enable movements at the maximum programmed speeds.

In this case, crane productivity is maximized by using a series of bespoke basic, modular and open-ended software packages, developed by Control Techniques specifically for crane control. These are programmed into the PLC and onboard SM-Application modules, and connected via fieldbus, optimising movements in order to relieve the operator of these delicate and repetitive tasks.

Hoisting, trolley, boom and gantry movements are all driven by DC motors that are controlled by means of Mentor MP digital drives connected via a Profibus network to a controlling PLC.

Control Techniques also designed the Crane Management System integrated into its basic software and enhanced with control modules for the maintenance guide and diagnostics. Operational at the various levels of automation, these software packages automatically signal events as they occur, guiding the operator in maneuvers and assisting technicians with repair and preventive maintenance operations. 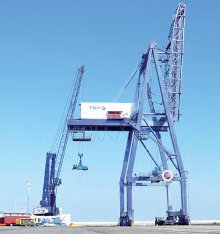 Providing a higher degree of reliability