Four companies worked in unison to meet the demanding specifications of a new wind power plant in Iowa. 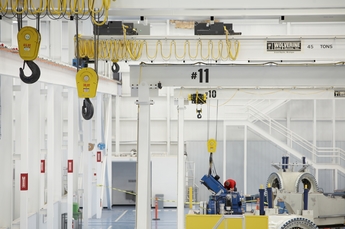 The plant primarily supplies turbines for parent company Acciona Energy’s wind farms throughout North America. The West Branch facility assembles the company’s AW-1500 nacelles; the structure that houses all of the components that generate electricity, including the gearbox, drive train and control electronics. Other wind turbine components, notably the blades and tower structure, are manufactured elsewhere, with all three main elements of the turbine meeting up at their destination wind farm.

In early 2007, Acciona Windpower contracted with design/build developer Ryan Companies US, Inc., to retrofit an existing structure in West Branch. Acciona wanted the $23million plant to be completely operational within seven months.

“Knowing that ground-up construction of a new facility couldn’t be completed in time to meet their aggressive operations goal, Acciona selected to modify this facility because it had existing office space and space for parts storage,” says Jim Kiesey, senior project manager at Ryan Companies. “It was simply a matter of adding on the manufacturing space to meet their unique requirements.” 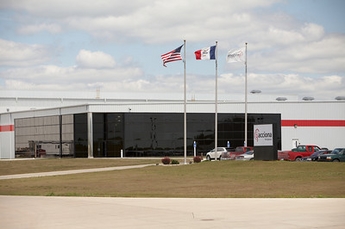 The facility, completed in November 2007, has been in full operation since December of that year. Acciona hopes to nearly double the 2008 production in 2009.

Outfitted with four inside crane aisles (three low and one high) the facility uses cranes the way other operations use forklifts, says Kiesey. “It was critical that we selected the right crane suppliers; if Acciona’s cranes don’t work or function properly, their facility is literally shut down.”

One low aisle, adjacent to the high bay uses two 45 US ton cranes with 30 ton auxiliary hoists, and two 5 US ton single girder, semi-gantry cranes. In the high bay, six 45 US ton semi-gantry cranes are employed in the assembly process, with a single 190 US ton crane running above to transport the finished nacelles to a transfer cart. The carts move the nacelles from bay to bay for further assembly or outside for inventory storage. Outside, a second 176 US ton crane carries the nacelles to a holding zone prior to routing to their final destination.

The 45 US ton, Class D cranes were supplied by Wolverine Crane and Service Inc., of Grand Rapids, Michigan. “As an R&M Materials Handling master distributor, we have the ability to build fabricated plate girder cranes which are a special design for long, heavier-capacity cranes,” says Rich Kelps, Wolverine president.

Wolverine constructed the cranes with pre-engineered components from R&M Materials Handling, Inc., and from controls supplier Drivecon, Inc. The integrated package plays an important role in the assembly process of the wind turbine nacelles, adds Kelps. The hoists, one per work-cell, lift the nacelle structure and/or its component parts to assist in that stage of assembly.

“As a crane components integrator, our company supplied Wolverine with the main running components for the cranes, including the top running, double girder wire rope hoists, end trucks and all the main componentry,” says Joe Ingle, sales manager, USA and Canada, for R&M Materials Handling.

“Because of the size and scale of the nacelles, Acciona needed to be able to set equipment precisely via the hoist motion,” says Carl Walters, Drivecon sales manager.

“We recommended the 45 US ton cranes be built with the XT variable speed control system for precise setting of the equipment,” Walters adds. “With the XT control system, the motor will speed up or slow down to match the production speed the user specifies with an available 1000:1 speed ratio.”

Combining the XT variable speed hoist, bridge, and trolley controls all in one enclosure (along with all of the radio controls) enhances Acciona’s ability to direct the large nacelle units throughout the assembly process.

One of the Acciona project’s unique challenges, says Kelps from Wolverine, was the planned presence of the transfer carts used to transport the completed nacelles both from bay to bay, and from inside the facility to the outdoor holding area for finished inventory.

“The transfer carts run on rails embedded in the floor which were going to intersect with the lower rails of our crane gantry systems,” he says. “In order to make this a seamless transition, our engineering team designed a cross-ramp system.”

Additionally, Acciona specified custom paint colours throughout the facility, including the cranes, which are normally painted safety yellow. Instead, the cranes are painted white with blue end trucks.

“Acciona is very particular about its image,” says Kiesey. “One of the project requirements was that this Iowa facility match the paint colours in its European facilities, from the cranes to the epoxy floors.”