No stranger to complicated motion control projects, UK crane services company SCX's special projects division has dealt with a number of high profile clients and unique applications over the years.

One of the more iconic ones in recent times was the company's work for the All England Lawn Tennis Club (AELTC) providing motion controls for the roof closing mechanism on Wimbledon's Centre court.

SCX project manager John Biggin was performing ongoing maintenance work on that very project when Hoist spoke to him for this article.

Commenting on the range of work the special projects division does he says: "There is some general industry work, but work for the Ministry of Defense (MOD) and the nuclear side of the industry is quite busy at the moment.

"We do various other projects too. We have done some window cleaning projects and we have done other unique ones. At Ascot there is a section of the grass, the racetrack, that actually moves out to let cars in. To there are some oddball projects that we do get involved with here and there, and obviously there is the Wimbledon centre court roof, which is a long-term project."

Even more recently, but further from home, the SCX Special Projects unit has created a highly complex crane automation system for an Aluminium Rolling Mill in Oman.

Molten aluminium brought in from the adjacent smelting plant is processed into coils, which are then distributed around the plant by 12 cranes, provided by sister company Street Cranes, ranging from 7.5t to 80t standard working load.

The hoists, end carriages and control panels have already been shipped, the bridge steelwork has been sourced locally, and the final piece of the puzzle, SCX Special Projects' complex automation system, is about to be sent out to the Middle East for installation.

SCX Special Projects are automating two of the plant's 25t cranes that will take hot aluminium coils into and out of storage, as well as between a variety of different process lines.

SCX's complex Crane Management System (CMS) can record information on type, date/time of any movement and which onward processes are required for each and every aluminium roll.

Biggin says: "Two 25t cranes that remove the rolls off the cold mill, and they are pulled of the cold mill and then they are taken to various other applications.

"You've got some annealing furnaces you've got some tension leveling, you've got a slitting line and various coils come off and depending on how thick they are and what the finished product will be they go into various process lines within that area and the cranes automatically get a command from whatever machine requires them. The crane will then deliver that coil to the correct machine.

"When it's completed the process in that machine, the machine will send a command to the cranes so that they know to pick up the aluminium coil and put it in store, or take it to another machine for processing and the crane will do that.

"Eventually they will go out to a final machine, that then will go out of the factory to the customer."

The CMS use the pre-recorded information to organise each coils' predetermined process paths into the most efficient network possible.

This enables the coils to be moved to their destinations in the shortest time, while simultaneously ensuring that the workload is shared equally between the two cranes. These calculations also include collision avoidance programming to ensure that neither crane obstructs the other during operations.

As the hot coils enter the cooling area, the cranes' initial responsibility is to accurately position them onto 45 stands in front of the coil cooling air fans.

A coil in the cooling area that has reached a temperature of less than 80°C is automatically moved to one of 120 stands in the storage area.

This assessment is initially based on cooling time, but is verified by temperature sensors mounted on the grab.

Optical and pressure sensors on the grabs also determine whether the coils have been accurately seated and it is safe to move them on.

Biggin adds: "The grab itself has got the main number of sensors on there for the actual coil.

It has got a temperature sensor along with other sensors, such as pressure sensors, on there to tell us that it has got the coil, it is picking the coil up and that it is in the correct position to be able to pick the coil up, various things like that.

The actual crane itself has got encoder systems for all motions, encoders that will tell us where everything is down to a few millimeters. Those are the feedback centres for the crane."

"You've also got a sensor to tell the crane that it's actually got down to the centre of the coils.

"This then lets the arms know they can move in to pick the coil up. This is in addition to the sensors on the feet that will tell us, as it is starting to pick the coil up, that the weight is transferring to the crane properly and that we have got a good hold of it, because if we are picking up thin air we need to know that.

"The temperature sensor in the crane grab is only needed if the coil being picked is going into general storage. There's a cooling area in this storage area as well as a general store. When we take coils out of the cooling area we need to know that they are below 80°C."

For some of the other processes in the aluminium rolling mill the coils need to be around 80°C, so the temperature sensor on the crane also serves another function. But as complex as programming to make the crane follow the process up to this point may be, its responsibilities do not end there.

From the general store the coils need to be moved to the tension line, into a slitting line or onto transfer cars to be removed from the mill. On occasion they can even require being transferred back into the cold rolling area for adjustments.

The CMS is able to use the details on each coil's process path and cross-reference this with all the other tasks the cranes must complete.

This means not only being able to ensure each coil moves through the right steps unique to its final destination and purpose, but also to do this while accounting for the movements of the other automated crane to pick the quickest, safest routes to move the loads.

The cranes are linked back to the CMS via a Siemens SCALANCE wireless communication network which also provides an approved E-stop, ensuring complete shutdown of the crane system in the event of emergency stop activation.

In the event of a problem with the CMS, if for instance someone manually handles a coil that had been marked in the system as part-way through the process, the crane systems can easily be switched to manual from automatic operation.

Besides this, Biggin believes the system is so well built the likelihood of a malfunction of the CMS is unlikely.

"If the client has problems with one crane they can move it out of the way and the system will just use the other crane to do the work. As for anything else, if the system goes down then it can still be manually used, the cranes can be put into manual operation and used either with a manual control or a pendant control.

"But the system is designed to not break down, the system we've designed should be sturdier than that."

Biggin adds that these aspects of the system's design were easy to plan for, and should be easy enough to install once work to install the system, currently underway, is in full swing.

The trickiest part of the whole project however is the initial programming of the cranes' motion software to ensure it will be able to account for all the variables likely to occur when installed in situ.

"The control software is the hardest part," says Biggins. "It's the lengthiest most complicated part to write, to make do what we need the cranes to do.

"The rest of it, the actual encoder system and what feeds into the control system, the positional system, that's reasonably straightforward technology.

So the software to make it do what the specification requires it to do is vital." Initially, the CMS will act as the overall brain of the storage operations, but has been specifically created so that it can integrate into a complete plant management system (PMS) when that is installed in the future. 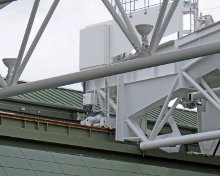 Work at another FATA Hunter mill

Two cranes will be automated at the site 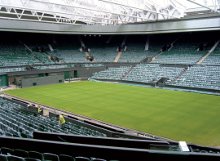 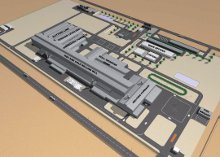 Mock-up of the new Aluminium rolling plant for FATA Hunter