Asia is an economy in expansion. Julian Champkin investigates the lifting market there.

In December 2020 China overtook the US to become the EU’s largest trading partner. (Source: Eurostat). In part that was due to China’s faster recovery from the Covid pandemic, but only in part. Asia is a growth market, and a growth area of production also: the term ‘tiger economy’ is still very far from irrelevant. Sany is a company that could be said to epitomise the size, opportunity and growth of the market in China—and to epitomise also the drive for overseas markets, embodied in the ‘belt and road’ initiative introduced by central government in 2013.

One of the most successful of China’s manufacturers, Sany produces heavy construction and industrial equipment, targeting the higher-quality end of the market. One of its specialisms is port lifting gear: gantry cranes, RTGs and RMGs, as well as empty container handlers. Louis Chan is sales and marketing manager for Sany port machinery.

“We serve primarily three kinds of customer,” he says. “Firstly, the stateowned terminals and yards, such as Shanghai and Qingdao.” It is well to keep in mind here the scale of China’s markets. Shanghai is the world’s busiest containerport; Qingdao is one of the ten busiest ports in the world. “Secondly, there are the port operators, such as Hutchinson, PSA and Maersk.” Singapore-based PSA operates ports as far apart as Antwerp, Halifax and Singapore itself. “A third market that is just opening up in China is the inter-modal, of transferring containers and goods between sea or riverport and rail or road. This has been a major sector in Europe for some years but in China it is a recent development, and an emerging one as the nation is engaged in expanding its rail transport system. As well as those three, a smaller amount of our business is to the private sector, where we have around one-quarter of the market share.”

Demand from customers, he says, is for two innovations in particular. “The first is for automation. Ports are very labourintensive, especially for port operators, and manpower costs money, in China as in the rest of the world. Nowadays all terminals and operators are hoping to reduce that expenditure, so automation is a trend.

“The second demand is for electrification and the move from diesel power. So we produce electric gantry cranes, and also electric reach-stackers. Our latest product in this sector addresses both those demands, for automation and for electric power. The ARTG, or automated rubber-tyred gantry crane, is a first in the sector. Our first blockorder was to the China Merchants port in Shenzhen, Guangdong province. The port is modernising and expanding, and we delivered 27 of this new product to them in October 2020.

“Similarly, we are providing ten electric powered empty container handlers for Singapore port. That, too, is the first batch of this product in the industry.

“The classic markets for Chinese manufacturing are South-east Asia and Africa; in the port machinery sector, that is true but only half of the truth. We are also very active in the USA. 20% of our port machinery sales are there; next year we hope to increase that to 30%. We have a very good portfolio which should help towards that target.” COSCO, the China state shipping line, is investing in ports in the Middle East, in UAE and Abu Dhabi, again as part of the belt and road policy.

“We have supplied mobile port equipment for those projects; we have not sent them gantry cranes yet but that may come.” China of course was the first county to be hit by the Covid-19. It also took strong and effective counter-measures early; so although companies took a hit around mid-year 2019 much of its economy is now back to near normal—and where many Western companies have struggled, some Chinese ones have had a remarkably good year. Sany is one of them.

“Covid of course has been causing a lot of trouble,” says Chan, “both to the world and to the sector. Even despite that, however, our sales and our market share expanded in 2020. We saw a 50% increase in sales value within China, and in the outside world our overseas market is up 13% year-on-year. And this is despite Covid-19.

Japan-based Kito is another lifting company that confirms the more rapid recovery from the Covid pandemic.

Tsuyoshi Oshita is their communications manager. “Yes, we find there is an increase in terms of economic recovery from Covid,” he says, speaking in mid- November 2020. “The Asian market is ahead of western ones, and are near normal again now, ahead of markets in Europe or the US. Sales in Japan were affected greatly in May, and in the US April and May were poor; in both markets June and July saw a gradual recovery though business was not as strong as last year.” Recovery in the US was also hampered, he says, by the election.

“But this fiscal year we have had good sales performance in China,” he says. “China has a fairly active and healthy economy just now. Business is down, but only by a small amount.” Tracing the economic effects of the pandemic, “February 2020 was slow. In March we saw a very positive reaction to the pandemic; and now we have no worries about business in China: we have caught up and more than recovered the lost ground.”

Kito’s most recent product is a new electric chain balancer, a materialshandling machine for suspending a load for free movement by hand without a need of hoist push button. It can switch between float mode, in which the operator can have both hands free to move the load with just their hands, and cylinder mode, to move a handheld load at variable speed. “The balancer’s ultra-slow motion in sync with hand movement is ideal for precise positioning and mounting work,” says Oshita. Kito have been accepting orders for it since early November.

Kalmar, part of Cargotec, has until recently been part of a joint venture with Jiangsu Rainbow Heavy Industries (RHI) of Jiangsu for its Asian operations. The joint venture, Rainbow-Cargotec Industries (RCI) was established in 2012.

Early in 2020, Cargotec announced plans to sell its 49% share of the joint venture to RHI. RHI now owns 100% of the former joint venture, and the new name of the company is Rainbow Industries Co. Ltd. (RIC). RIC will continue as Cargotec’s subcontractor and provide assembly services for Kalmar at its facility in Taicang, China.

The change aims to simplify Cargotec’s global supply chain operations. Simplification is needed, says Cargotec, mainly because the number of complex automation projects has been growing in the past couple of years.

For example, last year Kalmar introduced Kalmar One, the first open automation system for container terminals, which can handle operations regardless of the vendor, equipment type, operation mode or automation level at the terminal. It has added Automated Truck Handling to its AutoStrad offerings, which automates the last stage of the landside operations: the final placement of containers onto road trucks. “More customers are exploring automation,” says Daniel Ho, VP, Sales, Asia-Pacific at Kalmar. “They are also looking for eco-efficient or green products, especially Zero Emission RTGs, to reduce the carbon footprint of their operations. Legislation on green initiatives will impact adoption of green products by the operators and in some countries the governments are encouraging the adoption of green products by granting incentives. Recent advances in lithium-ion (Li-ion) battery technology have enabled the full electrification of cargo-handling equipment of all kinds, including Kalmar’s rubber-tyred gantry (RTG) cranes.”

The Covid-19 pandemic has had, he says, a huge impact on investment decisions. “Projects in 2020 have not been cancelled but have moved to 2021, or even further, depending on the control of covid-19. There are political tensions in countries like Malaysia and Thailand that also impact economic recoveries.”

Kalmar’s joint venture arrangement with Rainbow ended in May 2020; they are now separate companies operating independently. About 160 employees have moved over from RCI to Kalmar. Rainbow have recently supplied a gantry crane to the port of Ningbo Zhoushan, which is the world biggest in terms of tonnage. It is the first fixed gantry crane equipped with remote control and operating system in China. Meanwhile Kalmar has supplied RTGs to ports in Vietnam and in Cambodia (see case study).

Konecranes has demonstrated its confidence in the growth of the Southeast Asian market by acquiring the final 50% of MHE-Demag, to complete its ownership of the Singapore-based manufacturers and distributors, who run operations in Australia, Indonesia, Malaysia, Singapore, the Philippines, Taiwan, Thailand and Vietnam and distributes through resellers in half a dozen more.

Prior to the purchase, which was announced in December 2019, Konecranes was the main supplier to MHE-Demag, selling Demag overhead crane components. The sum paid was approximately EUR 143 million. The agreement was completed in January 2020, so we are approaching the first full year of the new ownership.

The strategic rationale is that with the acquisition Konecranes will bolster its position in the region, adding scale and scope to its global service organization and achieving synergies and simplified distribution channels for its industrial cranes in Southeast Asia. Demag will continue at present as a brand name in the region.

“Our traditional markets in Indonesia, Singapore, Malaysia, Thailand and the Philippines continue to be the main contributors to our activity in South East Asia,” said T.K. Mak, Konecranes’s Director for Industrial Cranes SEAP.

“Vietnam and Taiwan are showing strong potential, particularly in the waste-toenergy and power generation sectors. Waste-to-energy is a major industry globally, and in the region, and is continuing to advance as countries and their governments implement stricter environmental regulations.

“Infrastructure projects will continue to flourish in South East Asia and should provide a steady baseline of new work requiring cranes and lifting equipment.

Automation is another major trend. Technologies such as Automated Storage and Retrieval Systems are now more widely applied to paper rolls, ISO containers (particularly empty ones), steel warehouses and a range of other materials handling applications.” Konecranes has recently supplied equipment to Oji paper works in China. The order included four roll handling cranes in the sheet-cutting area and five process cranes for the paper machine. The process cranes were equipped with a variety of smart features—Sway Control, Protected Areas and End Positioning—to improve work safety and productivity.

“Space utilisation is important,” says Mak. “With real estate at a premium, any lifting technology or equipment that can perform the same tasks in less space has a huge advantage. Konecranes has put significant research and development into our product ranges for this. And crane modernisation is another service our customers are using more and more. It is a sustainable and cost-saving alternative to buying new equipment but still gives the more efficient, updated technology that is available in brand-new cranes tailored to particular industries.”

Modernisation can also substantially reduce the weight of older cranes, he says. “New motors, trolleys and hoists are significantly lighter than original equipment. And reduction of dead weight like this can often increase the capacity of an overhead crane, which is an important consideration as load demands on equipment have likely increased over the years. And of course Industry 4.0 features have been important for years; staying connected, especially remotely, to cranes and lifting equipment is further growing in demand amongst our customer base.”

The region is clearly thriving. The tiger has plenty of roar. 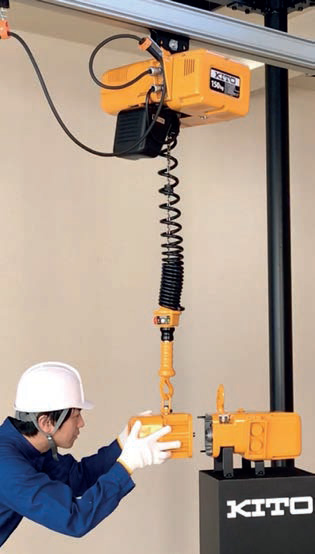 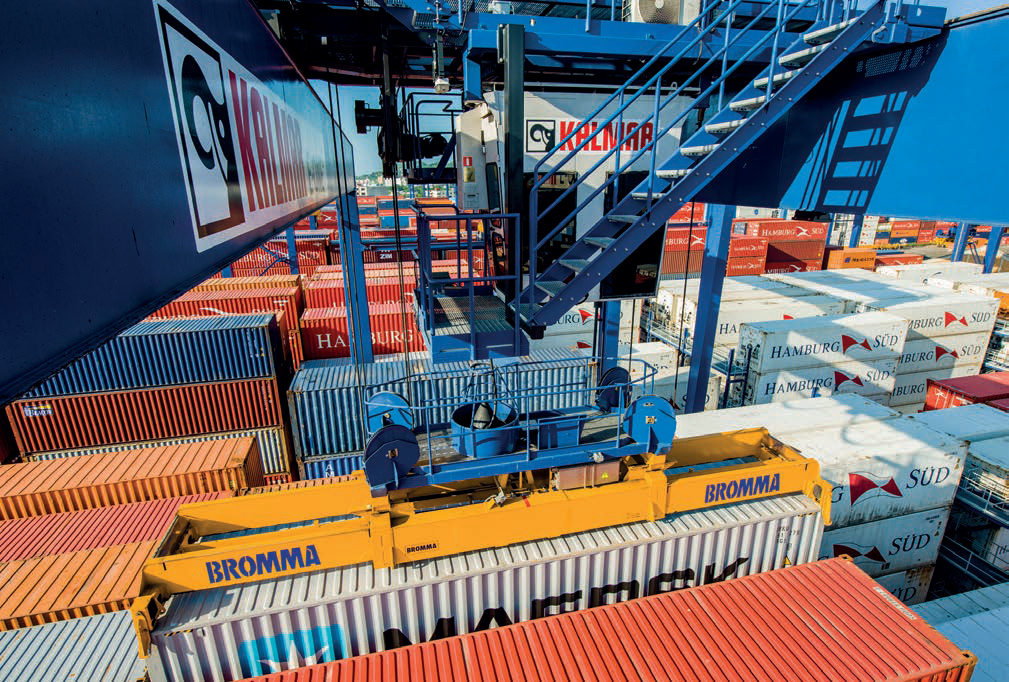 Kalmar’s fully electric, zero-emission RTGs are being used at the Tan Cang–Phu Huu terminal in Vietnam 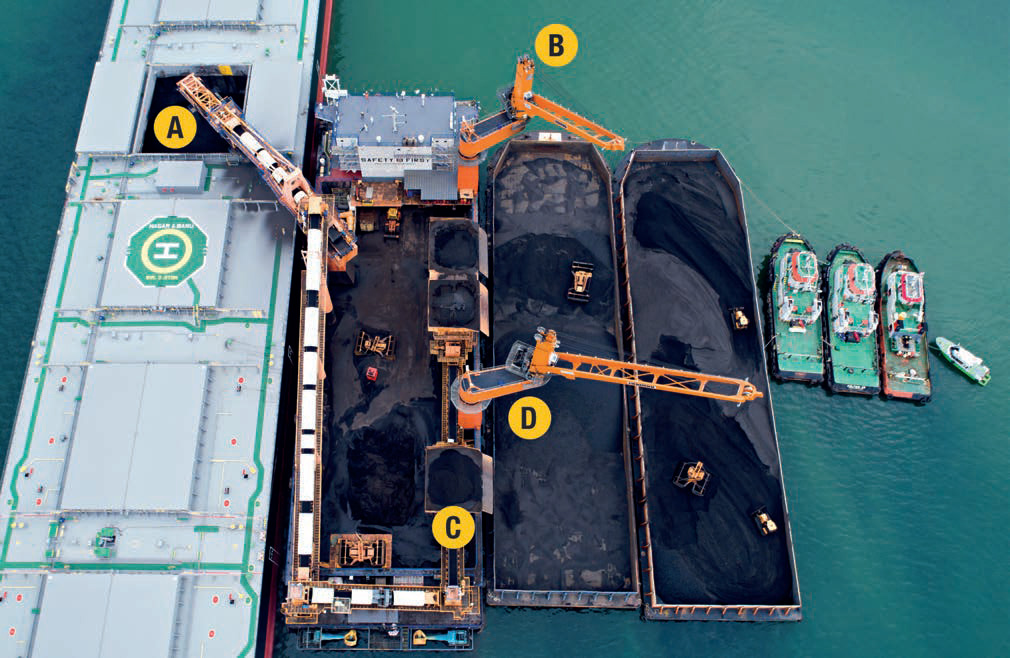 Liebherr dock cranes can also be mounted on floating pontoons, as here at Kalimantan, Indonesia. The coal arrives from inland on shallow barges (D), and is transhipped by two Liebherr CBG 300 dock cranes (B) to hoppers (C ) and then by conveyors to the ocean-going bulk carrier (A) . The cranes are installed on a 10m eccentric platform (D), which results in an extended outreach of up to 40m. 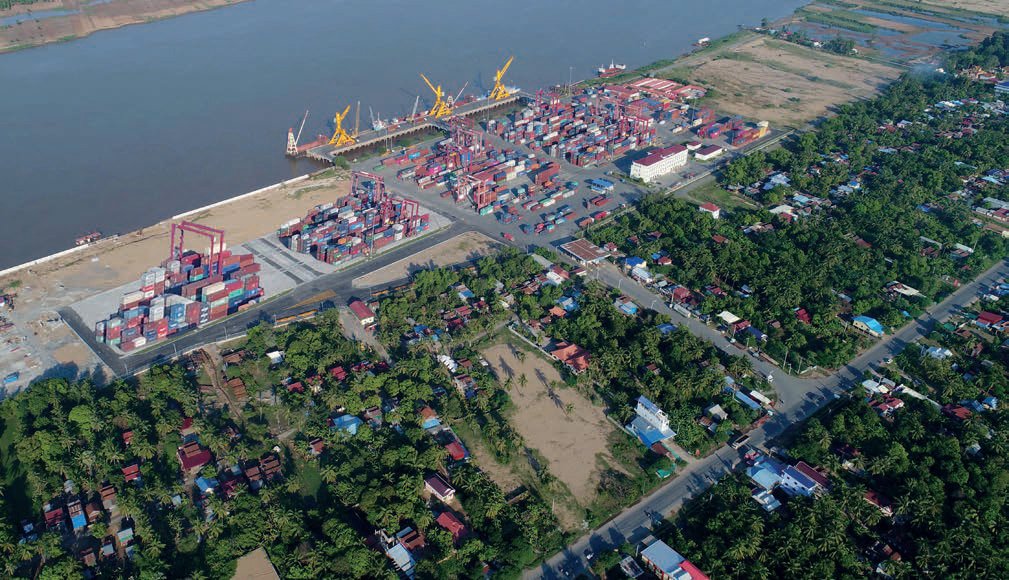 Kalmar cranes in action in Vietnam