In the Middle East, economic diversification to reduce reliance on oil will provide new opportunities for the lifting industry. Keren Fallwell reports

The Middle East, like the rest of the world, has felt the punishing impact of the Covid-19 pandemic but economists are forecasting economic growth and the lifting sector is confident that this will be reflected in strong business.

Last year – before the Omicron variant emerged – the International Monetary Fund (IMF) predicted the GCC (Gulf Cooperation Council) economies would grow by 2.5% in 2021 and 4.2% in 2022.

Interviews for this report were conducted just before countries imposed travel restrictions in response to Omicron, so the new variant’s reach was unknown, but at the time, governments and businesses were celebrating the success of vaccination programmes and lifting companies were feeling positive.

“In the Middle East, at the height of the pandemic, many projects were put on hold, not necessarily because of a lack of confidence but because of border closures,” says Ben Pimblett, Street Crane’s business manager EMEA & APAC. “Over the last few months, these same projects have been reinstated and we’ve experienced a significant uplift in orders, which puts us back on track to achieve our sales targets for the year.”

Liebherr shares a similar outlook, according to Wolfgang Beringer, marketing and communication.

“A lot of companies reduced their investments and were unsure about the impact [of the pandemic] and the future but business moved forward in the last few months of 2021 and 2022 will be quite a promising year for Liebherr,” he says.

Suhan Shetty, Street Crane’s regional account manager MENA & India, says the Middle East markets remain stable. The United Arab Emirates (UAE) and Oman continue to be the strongest markets for Street Crane, and the company is tendering for many large projects in Saudi Arabia, which is the largest market in the region.

For Liebherr, Saudi Arabia and the UAE are particularly strong. “Every year we sell a lot of mobile cranes to this part of the region,” says Beringer.

Other countries, such as Syria, Jordan and Lebanon, tend to be geared more to the used crane market and often political tensions make business difficult.

Turkish company Hareket, which has had a presence in the Middle East for three years, says the markets remained severely depressed until mid-2021 but they are now recovering. Burhan Kuris, managing director, Middle East and North Africa, describes Saudi Arabia as “the bellwether of business growth in the Middle East,” and activity there is moving at pace.

“Aramco has resumed investments aggressively to recover lost time with shelved and new projects. There are bold urbanisation schemes with new mega cities and infrastructure projects, and investments in the renewable sector are also experiencing an exponential growth pace,” he says.

Qatar also has large gas, petrochemical and civils investments, says Kuris and, he adds that, while the other countries in the region are recovering, they are taking more prudent and careful steps.

Two major factors influence business activity in the Middle East: the oil price and political issues, such as government ministries which are lacking in a proper budget for projects.

There is no doubt the oil price dominates economic and business decisions in the region but its sway is being challenged as some countries aim to diversify their economies and reduce their reliance on oil.

“Infrastructure and construction projects in general are growing, especially in Saudi Arabia with its Vision 2030 and therefore it is growing its tourism sector and reducing its dependency on the oil and gas sector,” says Beringer.

Kuris points to Abu Dhabi’s decision late last year to drop its plans to build a new oil refinery at Ruwais, citing a changed economic outlook for the project.

“Despite the increasing price of oil, global ambitions to get to net-zero carbon emissions will likely affect the oil-refining business. These investments are moving towards wind energy, nuclear and hydrogen plants,” says Kuris.

Shetty says oil is still the dominant factor in the economy but more and more countries are trying to diversify.

“Countries like Saudi Arabia and Kuwait are bowing to global climate agreements to switch to green energy and renewable alternatives,” he says, adding that Street Crane is being specified in many new green energy facilities around the world.

Shetty says Street Crane recognises Saudi Arabia as having the biggest potential in the Middle East. It recently entered into an agreement with crane manufacturer ElectroMech based in India, to supply Street Crane’s products exclusively for the Saudi Arabia market.

Vikas Jaswal, regional sales manager at Al Waha, Street Crane’s distributor in the UAE, says in the UAE there is a lot of investment in future technology, waste management, integral water treatment plants and green technology, while the traditional dominant sectors of construction, oil and gas are still recovering from the pandemic. The UAE may be the most diversified market, but an increasing number of fabrication companies are relocating their bases to Saudi Arabia to lower their operating costs, forcing the UAE government to increase spending on infrastructure projects.

Önder Topuz, sales and marketing manager at BVS Cranes, acknowledges the Middle East has always been “an arena of political and economic volatilities”, but there are relatively strong economies “putting great emphasis on growth and economic welfare which will give rise to prosperity in the coming decade”.

“There is a growing market in the Middle East in general. Israel, Egypt, Jordan, Iraq, Saudi Arabia, Qatar, Kuwait and UAE seem to be vibrant and energetic in terms of economic growth and growth of lifting markets,” says Topuz, adding that steel production, manufacturing industries of all types and infrastructure investment are increasing all the time.

He says rising energy prices have affected commercial activity but there are new opportunities as rising commodity prices and steel, copper and aluminium are attracting investment.

“BVS Cranes is working with major groups in the Middle East and following up new projects carefully,” says Topuz.

While Street Crane has been installing its full product range in the Middle East since the 1990s, Shetty says its standard ZX6 and ZX8 wire rope and LX chain hoists continue to be the company’s volume-selling hoists in the region.

The demand for certain technologies differs between countries and industries but Shetty says, in general, large companies are favouring automated and semi-automated cranes to reduce labour. Demand for conditioning monitoring features to reduce breakdown and production downtime is also increasing.

“We are also seeing an increase in demand for equipment able to operate in higher temperatures – now 50-55°C ambient temperature, where previously 40- 50°C was specified,” says Shetty.

BVS supplies its standard cranes to the Middle East but it has also produced some process cranes and special products to meet specific requirements, such as tunnel RTGs for Saudi Arabia, lattice-type gantries for Kuwait Airport, large capacity gantries for Qatar, and specially designed overhead cranes for a Boeing hangar in Iraq.

Liebherr expects current trends in the Middle East to continue into the foreseeable future, and to gain traction.

“Over the next few years Saudi Arabia will reduce its dependence on the oil industry and drive forward the transformation of its society, culture and economy,” says Beringer. “Large investments will be made in infrastructure projects, tourism, urban development, health and education.

“In the future, Saudi Arabia is set to become the main hub between Africa, Asia and Europe. But also other countries, such as the UAE, have their developments in green technology and their own goals, for example, to be carbon emission free within the next decade.”

Towell Engineering Group is confident the Oman government’s current development plan, the first in the Strategic Oman Vision 2040, will boost the mining, water and electricity sectors, while in the UAE, there will be greater emphasis on crane refurbishments and modernisations.

The Middle East’s solid footing in the lifting industry is one reason for the Lifting Equipment Engineers Association (LEEA) establishing a regional council there. LEEA has 1,200 members worldwide and around a quarter are in the Middle East.

LEEA’s first regional council, covering Australia and New Zealand, launched in 2021. The Middle East council, and another for South-east Asia, will start operations this year – later than initially planned because of the Covid pandemic. In preparation for the launch, all of LEEA’s training information and tools is being translated into Arabic.

LEEA already has a full-time member of staff in Saudi Arabia – Middle East member engagement manager Amro Hassan – so he will lead the new initiative.

“The Middle East has become more important to us in recent years because of the genuine desire to professionalise the market,” says Ross Moloney, CEO, LEEA.

“It is clear that there is the same determination to have high standards as there is anywhere in the world.”

The regional councils are part of LEEA’s strategy to be a “truly global association”, which is more than just having members around the world.

“It’s having governance and spending decisions made in regions for and on behalf of that region,” says Moloney. “We are not a UK association that visits countries; we are a UK-based association that supports a truly global membership. This is about delivering the LEEA vision rather than establishing satellite LEEAs.”

The regional councils will have responsibility for budgeting, marketing and training, and able to develop region-specific programmes; for example, the Australia and New Zealand council is investing in an apprenticeship pathway.

“Our aim is to eliminate accident, injury and fatality and part of that is to convince people they should be making great buying decisions,” says Moloney. “When you try to do that all from the UK, you miss things. Regional councils are about empowering local members.”

And this year, LiftEx is being held in Bahrain, the first time LEEA’s flagship event has been staged outside the UK. It will take place at the Gulf Hotel and Convention Centre in Bahrain from March 21-22.

Although the lifting industry was affected by the worst of the Covid pandemic restrictions, it wasn’t grounded and companies managed to complete contracts in the Middle East.

Lootah Lemmens Crane Systems, which is a joint venture between Lemmens Crane Systems and Lootah Group in Dubai has supplied several cranes to Abu Dhabi National Aquarium, the biggest aquarium in the Middle East and the first project to open on Al Qana, a new waterfront destination in the UAE capital.

The aquarium opened in early November and Lootah Lemmens’ machinery will play a vital role in the venue’s ongoing operation.

Lootah Lemmens also supplied three boats, connected to a travelling mechanism, for visitors to move around one of the pools, and another boat for maintenance.

A BVS overhead crane in the Iraq Boeing hangar 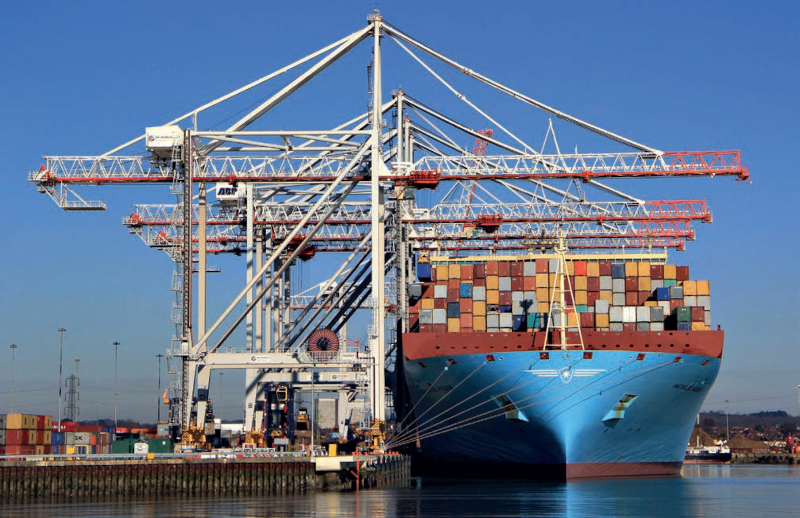 At Breakbulk Middle East in February Liebherr will focus on its main products for the region – the Liebherr mobile harbour crane, STS and RTG 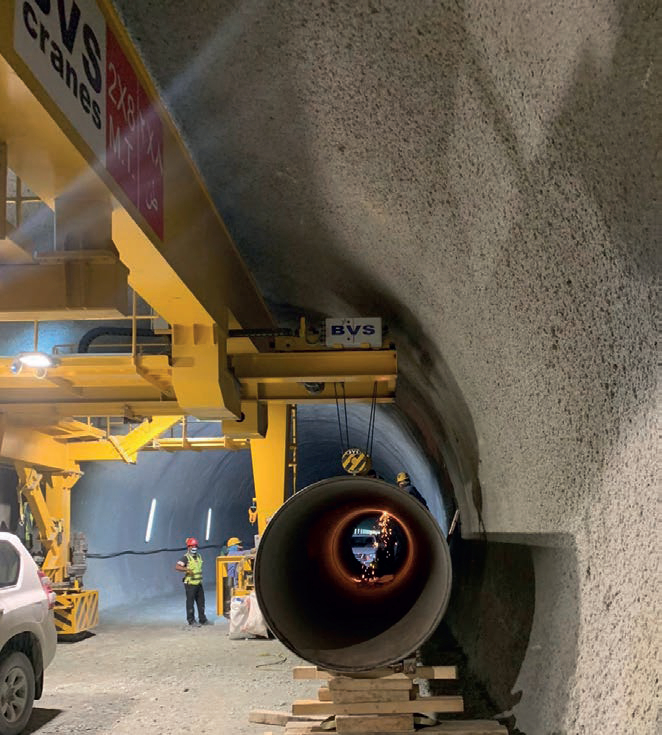 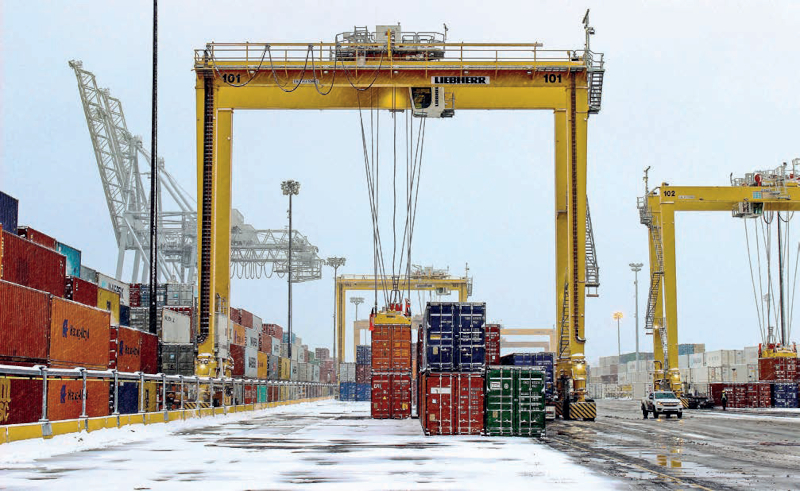 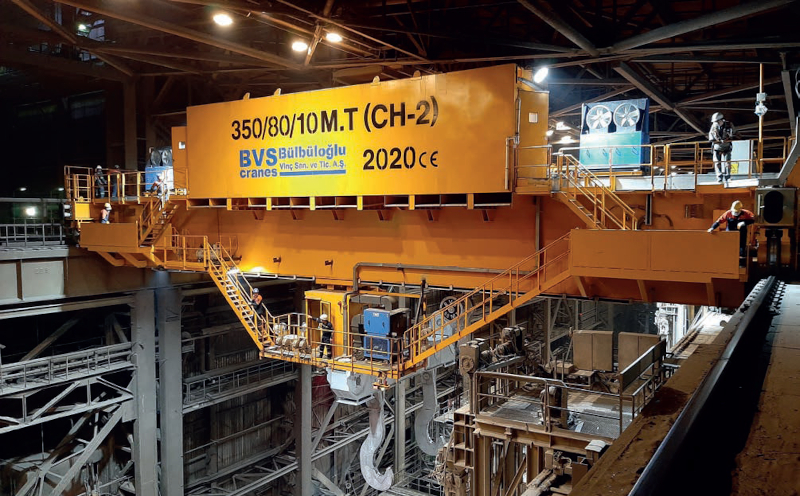 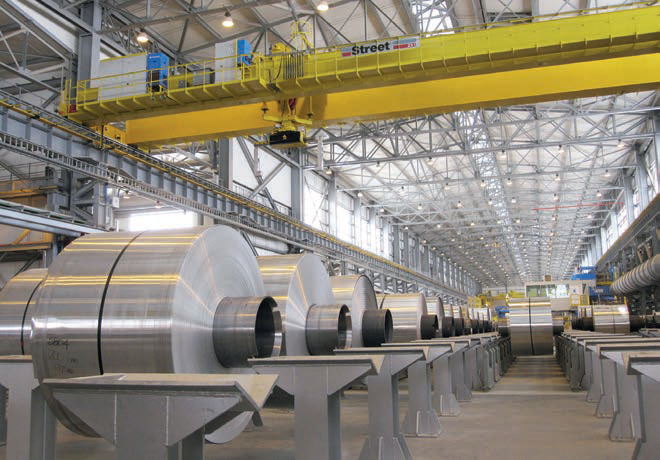 25-ton Street Crane cranes at Oman Aluminium Rolling Company’s coil storage facility. They are among 12 supplied to the plant, ranging from 7.5t to 80t capacity 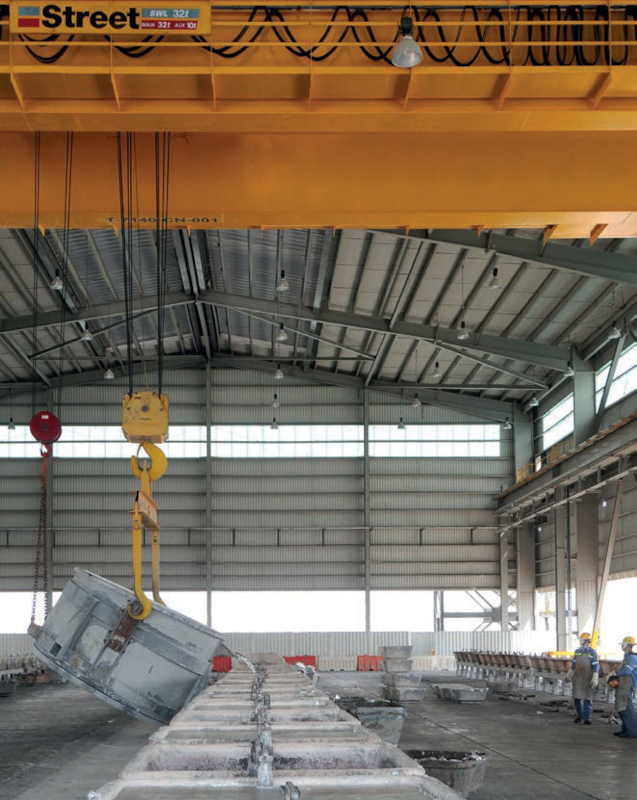