With the push to establish a well-developed infrastructure network across Asia and the Middle East, gantry cranes and straddle carriers are frequently used to transport precast concrete elements on construction projects. Cristina Brooks looks at the prevalence of this practice across the regions

Leading crane manufacturers Cengin, Comtec, and Anupam build this kind of equipment to service the current rapid development of infrastructure across Asia.

In producing this equipment they too are following the global trend towards modular construction using off-site fabrication of precast concrete. Precast concrete is cured in factory-like casting yards rather than in-situ on construction sites, which results in sturdier concrete segments. The US government's Federal Highway Administration reports that modular panels make the construction of highways in the country safer, since it results in more durable roads, as well as faster and cheaper for road operators, as it allows more work to be done at night when there is less traffic.

While in the US trucks can transport precast segments from the casting site to the construction site, in Asia where road conditions may be poor and casting sites are often remote, gantry cranes are frequently chosen for this work.

Straddling the globe
A major global player in the provision of concrete moving equipment, Comtec in Italy, supplies construction gantries and straddle carriers. In addition, it manufactures overhead span launchers for bridge construction.

Comtec has seen success with its concrete straddle carriers and sells them on nearly every continent. It produces them for clients in countries including Greece, Romania, the US and Brazil.

It has extensive experience working in Middle Eastern countries like Qatar, Dubai and Saudi Arabia. In Asia it supplies to Korea, Malaysia, and Taiwan for example.

When it comes to moving large concrete segments, Comtec's clients can be either contractors or subcontractors involved in major construction projects.

Comtec offers the additional option of renting canes for cost-focused clients. Comtec commercial director Enrico Mascheroni comments: "Normally we sell the cranes to them, but if we have something second-hand available we are open to rent them also.

While Masheroni stresses that every gantry is designed as per client wishes, and custom capacities can range up to several hundred tonnes, he says that the 100t capacity model is much requested.

Some of Comtec's past projects in Asia include the manufacture of 140t straddle carriers used in concrete yards in Malaysia.

In Kuala Lumpur, Malaysia it supplied 80t straddle carriers to MTD ACPI Engineering. MTD ACPI, based in Malaysia, is an investment company engaged in the construction of mountain roads, highways, bridges, and highway maintenance. It also builds precast concrete products for infrastructure projects.

The group builds infrastructure in Asia and the Middle East for projects such as the Jamarat Bridge in Saudi Arabia and India's Delhi Metro. MTD ACPI used Comtec straddle carriers to move segments while doing construction work on the Kelana Jaya Line in Kuala Lumpur, Malaysia, a medium-capacity light rail transport system. In operation since September 1998, the Kelana Jaya Line is one of three rail transit lines operated by the RapidKL rail network as part of Kuala Lumpur's rail transit system. It was formerly known as PUTRA after the company that developed and operated it, Projek Usahasama Transit Ringan Automatik. On that site MTD ACPI used the straddle carriers to move precast segmental box girders, tunnel lining, parapets, planter boxes and station platforms.

Apart from moving concrete segments, another application for large construction gantry cranes is the assembly of tunnel boring machines (TBMs).

The company used the gantry crane to lift what is currently the biggest tunnel boring machine (TBM) in the world, 'Martina', located on the jobsite for the A1 Highway at Pian del Voglio in Italy. The components of the TBM had a total height of 15.62m, equal to the height of a five-storey building, and a length of 130m.

Comtec tested the ultra-large gantry crane before delivering it to the Port of Ravenna on three connected trailers towed by two tractors.

Mascheroni says that Comtec's future plans for developing its construction equipment segments are unclear thanks to the ongoing Eurozone crisis.

"We are continuing our job, but it's difficult to make a plan for the future at this moment due to the big economic crisis. It depends on the market situation."

Bridge segments for India
In India many infrastructure projects are planned to meet demand fueled by its burgeoning economy. While highways are being widened and extended, high-speed rail will also be introduced this year. Monorail systems are currently under construction in seven cities. Both the Monorail Mumbai and the Thiruvananthapuram Monorail will be complete in 2016.

Established 39 years ago, India-based Anupam supplies overhead cranes and gantries for many sectors.

The company claims it has one of the largest market shares in India, installing cranes and gantries to move power plant equipment for clients such as Siemens, Tata Group and Samsung.

Producing a wide array of gantry cranes, it builds them not only for power, material handling and water gate lifting but also, increasingly, for metro and bridge construction. For the construction sector, it supplies both gantry and tower cranes. Its Anupam-Alfa tower cranes are built in association with Italian tower crane builder Alfa and used to build real estate.

Some of its construction sector clients include GMR Group, Reliance Infrastructure, and Jaypee Group.

Anupam has seen increasing demand for this sector in recent years, coinciding with a rise in infrastructure and real estate construction in India.

"We foresee a remarkable growth in the coming years in these equipments in the domestic market," says Anupam.

Construction gantries used for transport are often fitted with cable drums that reel out to a generator. The only limitation on the distance they can travel is the length of the power cable, which often reels over long distances to reach lengths as great as half a kilometre.

Anupam's gantries in this segment may be single or double girder gantry cranes, or even goliath cranes with capacities ranging up as high as 500t.

"These cranes normally are customised. For specific requirements there is no renting business, particularly in the gantry cranes category.

"However there is a good market for tower crane renting. Often the rental companies will buy tower cranes from us to rent to contractors themselves."

Anupam also serves other sectors in Asia, besides the power and tunnelling industries, that are currently enjoying booming demand. For example, it also builds container cranes for ports.

It has been an OEM supplier of crane parts for Konecranes, Demag and Abus.

It started exporting in 2007, and has established representative offices in Brazil, India and the US.

Examples of this include its variable voltage and variable frequency (VVVF) technology along with its programmable logic controller (PLC).

Cengin supplies countries closer to home, including Korea, India, and across Southeast Asia.

For construction markets it builds gantry cranes, tower cranes and derricks as well as launching girders. These are used in road and railway construction and for precast concrete casting yards.

"The end users, trading companies, engineering and building contractors are our most important clients."

"Also, some other industries need our gantry cranes for some special uses, for example, to assemble TBMs for tunnel projects," says Zhao.

Cengin's custom gantry crane capacities and models are most popular for bridges, roads and other construction work.

The 100t gantries lifted 3,000 concrete beams over two and a half years, and completed the quay wall in December 2011. The cranes were designed to work under harsh port conditions.

Cengin plans to expand its international presence via exhibition attendance, through which it seeks to form new distribution partnerships. It intends for products sold through such networks to be competitive in terms of both design and cost, says Zhao.

"First of all, Cengin will actively participate in worldwide professional exhibitions, which helps us to introduce our design, manufacturing, service advantage to global clients. Secondly, we will strengthen the marketing network, so that our information can be efficiently and accurately conveyed to every corner of the world. That also allows clients to quickly locate us." At these exhibitions, Cengin will reach out to potential distributors outside of China, Zhao says.

"We believe that we can achieve a win-win future based on our unique design, manufacturing and cost advantages and distributors' local marketing ability to develop more market share." 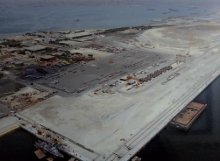 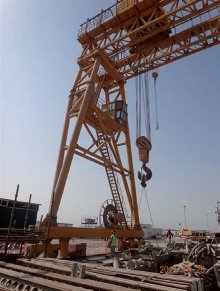 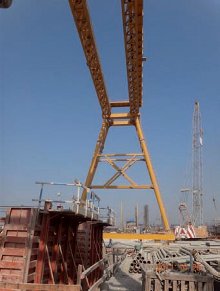 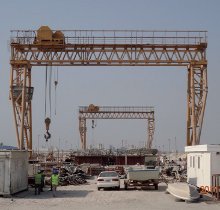 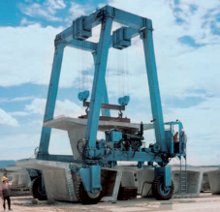 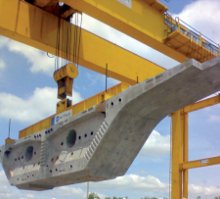 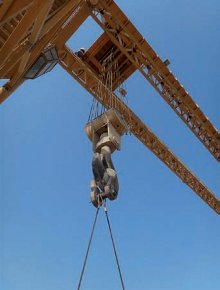