The idea of using portal cranes for construction work is not new, but Budapest's Margaret Bridge presented a series of challenges, including a curved structure, incline and low load capacity.

The bridge has been closed to motor traffic since 21 August, 2009. A particular requirement was that it must remain passable for trams and buses during the whole construction period, which makes it practically impossible to transport building materials to the construction site by lorry. Thus, a plan was devised to build two special portal cranes. 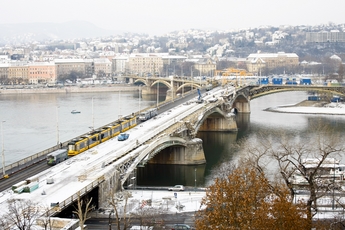 This was the first time this technology had been used in Hungary. Crane builder GD Gép és Daru took on the challenge of implementing its use.

As lorries cannot park on the bridge or at the bridgeheads, they deliver the components via the dock which runs along the riverbank below the bridge. From here, the cranes lift the steel and concrete sections, which are 13-14m in length, onto the bridge by means of a 5m long overhang beam and transport them into the correct position without rotating them.

To permit such a lift, the dimension between the portals was increased to 18m on the overhang beam side. A specially reinforced cross beam in a welded latticework ensures the necessary stability in spite of the wide spacing.

A further advantage is that the area at the edge of the bridge is more easily accessible so that it is easier to mount the components for the new pedestrian and cycle path.

Each portal crane can completely cover one half of the bridge on its 320ft long crane runway. One of the biggest challenges for GD's crane designers was distributing the load so the bridge can withstand the stresses. 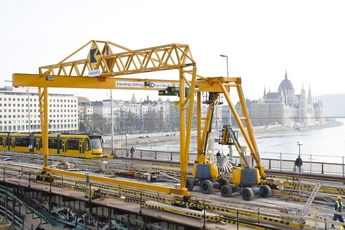 A further difficulty was that the north and south sides of the bridge have a bend and an incline of up to 3% so that conventional portal crane undercarriages were excluded from the outset.

The remedy was found in four specially manufactured undercarriages from the German crane technology specialist Stahl CraneSystems. Each of these units consists of four driven wheels which can swivel both in pairs and jointly. Thus, a maximum wheel load of less than 5t is achieved, which is lower than the wheel load of the Budapest trams.

The total output of the 16 driven wheels is 35kW so the cranes can operate safely even with 16t rated load, 3% incline and a wind speed of 50kmh. Two robust wire rope hoists from Stahl's SH series are used as lifting apparatus. The cranes are radio controlled.