Commercial wind farms around the world all face the same challenges when it comes to ensuring they remain operational and efficient. From a 50m tall 450kW turbine on a hillside in Denmark to the new generation of 100m tall 6MW offshore towers being tested in China and Europe, all of them must be maintained, inspected and if necessary repaired in order to ensure they remain efficient and deliver the energy required throughout their design life.

At the heart of the blades, which can be over 70m long, is the hub or nacelle where kinetic energy is converted into electricity. Consequently a host of moving parts from gearboxes to generators, brakes and transformers are housed here, and means that proper maintenance is essential.

Early wind turbines simply installed ladders to enable inspection, but for commercial application the turbines grew in height to support the growing blade lengths necessary to increase generating capacity. Against this backdrop an alternative lifting solution was needed and hoists placed in the nacelle have become a vital part of the wind industry, with both electric wire rope and electric chain hoists being used by turbine manufacturers.

"These lifts were a true revolution when being introduced. Up till then, turbine towers would just have a ladder to go to the nacelle," says Tractel account manager for the wind industry Jeroen Visser. "The tirak endless wirerope winch has been the reference machine in the market since its launch in 1975, it simply made sense to use this machine for mounting in service lifts for use in wind turbines."

Since then Tractel reports that it has supplied "thousands" of these machines into the wind industry and developed its Tirak hoist to lift massive weights. "We have also devised some very innovative lifting concepts that enable turbine manufacturers to replace components with weights of up to 12 tonne without the need for using external expensive cranes," says Visser. "We have also adapted our small Minifor wirerope hoist machine to work with synthetic rope, this results in a highly flexible solution with a minimum weight of wirerope."

Functions served by the hoists vary. "The main purpose of the hoist is to lift equipment up to the nacelle, usually a new gearbox or tools for inspection and repair," explains Arnd Haasler, European head of product management for Columbus McKinnon Industrial Products. The company is part of the Columbus McKinnon group, which designs, manufactures and markets hoists and lifiting solutions all over the world. The company supplies a range of electric chain and wire rope hoists used in nacelles for maintenance from the Loadstar Wind Edition chain hoists that can lift up to 3t to the Global King wire rope hoists that can lift as much as 30t.

Wire rope hoists tend to give greater capacities and faster lifting speeds being much lighter than chain hoists. In addition the heavier chain has to be stored somewhere when the hoist is lifting. However chain hoists are often a cost effective choice and do give consistent lifting speeds. Both can be seen throughout the wind industry.

Haasler says that the market has changed over the past decade as offshore turbines with higher capacities, longer blades and taller towers have become more common. "Over the last 7-8 years you can see a change. Formerly turbine manufacturers only wanted smaller 125kg and 250kg units and now they want more higher capacities over 500kg. One reason is that the turbines are getting higher and higher. A gearbox for such a large turbine of course is bigger than the smaller machines," he says.

The increase in scale creates another challenge beyond simply increasing the capacity. Turbine manufacturers want more speed too with typical rates of 8- 10m/minute being too slow for lifts that can be over 100m. This itself can introduce new technical challenges as heavy loads lifted at speed in high winds can introduce powerful loads into the nacelle. "The dynamic factor becomes really critical for higher speeds and higher loads. A 3t chain hoists moving at 20m/min has a lot of dynamic energy behind it," says Haasler. Furthermore the movement of the turbines themselves which adjust to face optimise wind speed, can also introduce loads into the nacelle that the connection point between the hoist and the nacelle structure was not designed to take.

Haasler explains that although his company have not experienced any failures here there have been examples of this happening in the industry. "Some of our competitors have reported hoist failures on the chain and housing side. When the chain is mounted in the nacelle and the whole nacelle is moving 2- 3m in each direction every day due to wind effects there are forces acting on the fixings of the housing even if it is not loaded. We have seen after 3-4 years that the hoists have dropped down in the nacelle because the housing has broken. So there are some effects that no one has really taken into account that are now being learned from experience. More attention needs to be paid to the connection point."

For offshore turbines, lifting solutions on the turbine platforms are a vital part of the machines. Gwynt y Mor offshore wind farm in the Irish Sea on the north coast of Wales for example is set to become operational in 2014. In August 2011 it awarded Terex owned Demag a contract to supply 164 of its 1.3 t Demag FDR-Pro 5 electric rope hoists for use within the Granada Materials Handling Python crane system. The hoists have a 24m lift height and a range of lift speeds along with corrosion protection.

Such cranes will be used to lift equipment, tools, spare parts and people from boats to the turbine before being hoisted up to the nacelle. Anticipating growth in this area Columbus McKinnon Engineered Products through German subsidiary Pfaff Silberblau is currently working on an electro-mechanical offshore crane for this purpose which is designed to compete with the hydraulic cranes commonly used.

The new 5t crane (see diagram) has screw jacks for adjusting the jib, a wire rope winch for lifting and lowering the loads plus a slewing drive for rotating. The screw jack element is taken from Pfaff- Silberblau's proven modular construction system. Thanks to its self-locking device in the gearbox and spindle, it prevents the jib from being lowered unintentionally.

Furthermore it is designed to withstand the harsh offshore conditions and doesn't require hydraulic oil making it an environmentally friendly option. "All the gears and control systems are capsulated to protect them from corrosion and it is heated to avoid condensation and therefore corrosion. Compared to hydraulic cranes it requires 40 per cent less maintenance," says Carsten Feddern, sales manager for Columbus McKinnon Engineered Products.

The new electro-mechanical platform crane from Columbus McKinnon Engineered Products has a 5t capacity and will be completed in Spring 2014 The use of a winch in this system means that it should be able to withstand the horizontal loads that could be introduced if ships become unstable due to poor weather conditions. Another way to counteract this is to increase the lift speed. "For a lift with waves of 1m we might use 10m/min but for 2m waves we could significantly increase the speed to 25m/min," says Feddern. At the same time the crane can be made with thicker plates and larger elements to provide more support. The crane is set to be finalised in Spring 2014 and Feddern says that it has had a lot of interest.

This is not surprising given the forecasted growth in wind energy with offshore growing from just 2 per cent of global capacity today to 10 per cent by 2020. Much of this growth will be in China which has set a target to produce 30GW of offshore wind by this date. "Despite the fact that the wind industry is levelling out in known markets, due to changes in policies, the world wide potential is still massive, and we will see more and more turbines being equipped with lifts, and rotor blades needing maintenance with the turbine ages increasing," says Visser. Statistics show that the largest proportion of new capacity in the next five years will come online in Asia, followed by Europe and North America and with so much new machinery set to be placed it is important to learn lessons from what has been achieved so far. "Nobody has an idea of the long term endurance behaviour," says Haasler.

"It is a special environment and there are risks of corrosion and the units are not used very often so they may only be used twice or four times a year. If a hoist is overused it is not good but if it is not used enough that is also not good."

Given that the very first offshore turbines only began operation in the early 1990s the industry is still emerging and studies into long term hoist performance are yet to be carried out.

"No one really has looked at how they are performing after 15 years in this situation. It is a tough environment," says Haasler. What is clear is that more could be achieved with better cooperation between the lift industry and turbine manufacturers. "We wish that a lot more wind turbine people would talk to us.

If our engineering people and their engineering people sat together we could definitely get better results," says Haasler. For example hoists could become an integrated part of the nacelle eliminating the risk of connection failure under high wind loading.

Another challenge is that the fast moving wind energy sector sees a lot of people moving between companies making continuity difficult. "That is one of the reasons that there are so many different solutions as people are all talking to different people and there are no real standards in the industry," says Haasler.. 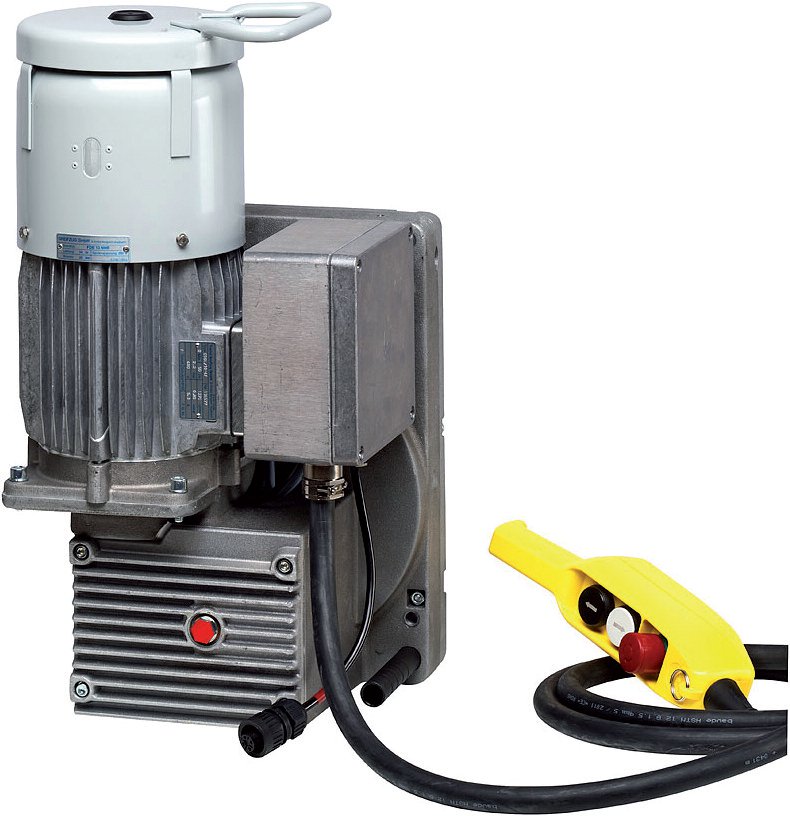 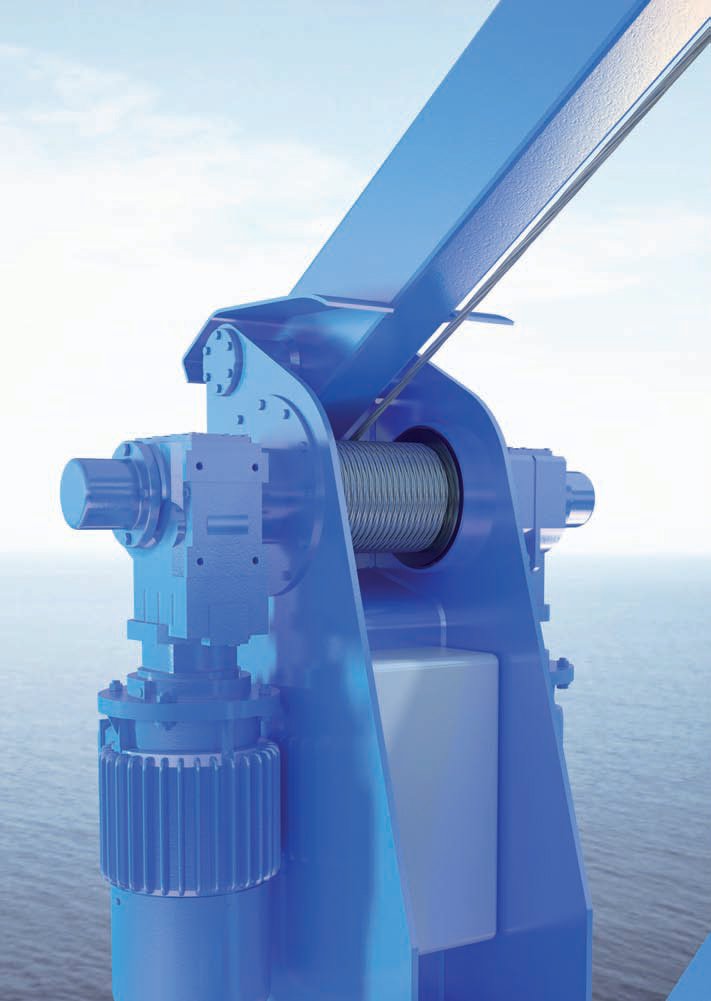 Tractel has sold more than 100 of these UVM rotorblade maintenance platforms worldwide. 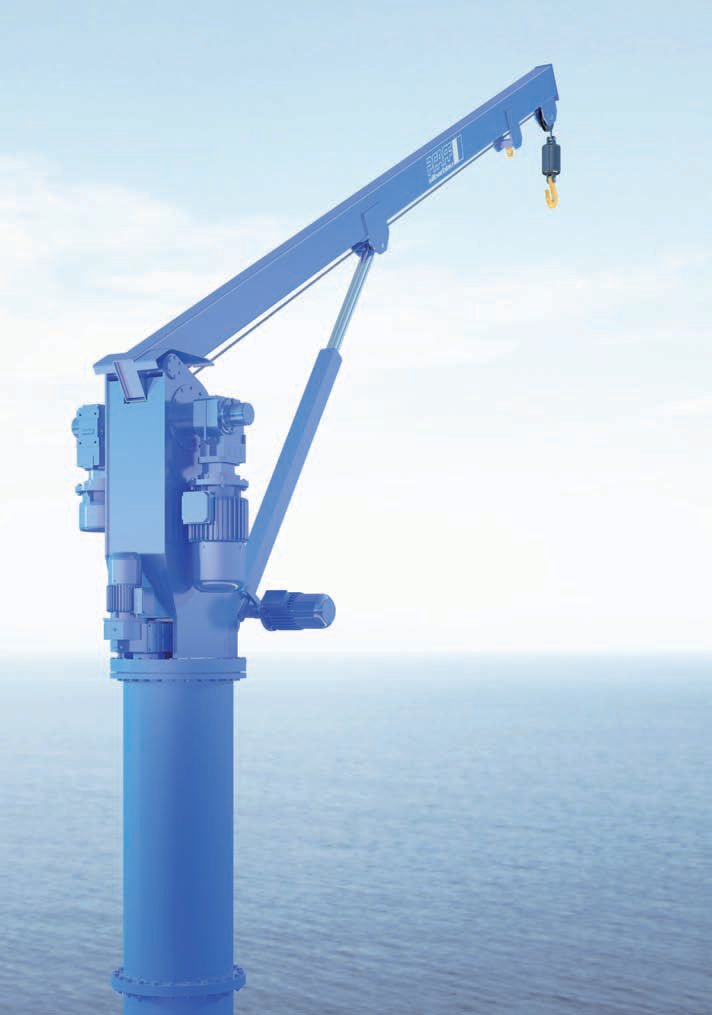