GH produces a wide range of lifting equipment from its facilities in Spain, which are shipped and used across the world. Daniel Searle visited the company.

From its network of three facilities in the Basque Country in the north of Spain -- and its fourth facility in Andalusia in the south of the country -- GH produces lifting kit for a wide range of sectors.

With more than 50,000 sq m of space across its four facilities, the company has capacity to produce more than 50 cranes a week -- and has manufactured more than 105,000 cranes over its 60-year history. The latest addition to the company's range of hoists is the GHD13, part of the D series launched this year and offering an improved capacity on other models. The D series is part of GH's latest generation of hoists, called the GHB11, which also includes the A and B series. The company's three facilities in the north of Spain comprise a tight manufacturing network, with a space for all the necessary components. "In our Alsasua factory we manufacture gearboxes, components, hoists and motors," says project manager Aimar Villa. "Everything is produced in the three factories in the Basque region, so we can maintain quality. We always aim to work with local suppliers. "At our Beasain facility we produce motors for lifting and for long travel, up to 35kW. The larger ones we buy from suppliers such as Siemens."

The company showed how their motors are produced, with copper wire compressed and tied automatically, before being tested electrically again. The motors are then processed in a varnish bath for two hours, and dried for five hours, fitted into an aluminium casing, and a fast electrical connection added. "We have a stock of electric motors, and we can also produce any of our models within one week," says Iñigo Ross. "We have 277 varieties, combining different speeds, powers, capacities and so on -- we produced our own as crane engines are highly specialised.

"We keep most of our spare parts at our warehouse in Madrid, with some spare parts for older cranes at our headquarters." GH's Asier Etxeberria adds: "In our second facility at Bakaiku, we have our metalwork operations, and paint the end carriages," says Asier Etxerberria.

"Our painting operations include standard painting, as well as specialised paintwork for cranes being used outdoor or in corrosive conditions, such as port cranes."

Cutting-edge technology was due to be installed in September, says Juanjo Lazkano: "We are currently developing a checking room, which will provide capability for 3D analysis of the components we produce. The machine is already installed and the facility is due to start up in September."

While GH's equipment is produced in Spain, the market for its products is global. "We have just acquired a new subsidiary in the USA, in Texas," says Villa. "The company, F&G Industries, was an existing customer, who bought crane components from us. They made their own steel parts and constructed their cranes at their facility. "We already had a warehouse in the US and in Mexico. North America is a growing market for us."

The company also has its own plants in Brazil, Mexico, France, Poland, Portugal, India and Turkey.. We ship hoists, standard components and end carriages to crane manufacturers around the world -- they then manufacture their own steelwork, as steel is heavy to ship long distances," says Villa.

"Around 80% of our sales are to export markets, with the remainder sold into Spain. We were already exporting before the recession, which helped us when the economy declined -- we have been selling into Mexico for 15 years, and into Brazil for ten. "The companies in Spain who are doing better are succeeding due to doing business abroad. Many of those who didn't look abroad disappeared when the recession took place. There is not so much work in Spain, but there is work around for Spanish companies.

"We are currently supplying a Spanish train company, which is working on a high-speed train project in Saudi Arabia. We are supplying more than 50 cranes and hoists, as well as transfer trolleys -- shipping has already begun, and there will be more sent next year.

"There is a lot going on in Saudi Arabia -- we are supplying kits and complete cranes to local companies in the country, particularly for work in Mecca and Medina. We are also building a 130t crane for Austrian company Andritz, a hydropower plant specialist. It is to be used in Egypt -- the trolley is covered as it will be operating in the desert."

Towards the smart Crane

Elsewhere, Villa explains that some of its potential customers, when buying a crane, sometimes mention that, for them, "cranes are just classic machines, useful for lifting and moving loads around" and, as long as they can perform these duties, all cranes are basically the same.

He says: "In the first seven decades of the 20th century, the challenge was about developing materials technology. The aim was to reduce the size and weight of all the mechanisms involved in a crane, so as to make better use of the available space in industrial plants and to reduce the loads and efforts upon them.

"They are compact, so they have a higher breaking load for the same wire rope diameter and they resist abrasion better. Later on, plastic infiltration became widespread, and as a result cables are livelier and better protected against internal corrosion and wear."

According to Villa, in pulleys, the use of those made of structural steel, which up to them were only used in process cranes, expanded and became universal, replacing die-cast pulleys, which are more fragile. Other novelties, such as the attempt to introduce plastic pulleys, were discarded after security problems with the wire ropes arose.

He explains: "Die-cast drums from the beginning of the century were replaced by curved-plate drums or tubes of S275 and S355 materials, with a considerably longer service life and with higher resistance to wear. In wire rope guides, plastic materials began to be used, as well as spheroidal graphite casting, to prevent wire rope damage.

"As for hooks, materials such as ASt41 or Ast52 were abandoned in favor of forged alloy steel 34CrMo4 and, more recently, 34CrNiMo6. In gearboxes, non-alloy steels like C45 or alloy steels like 34CrMo4 and 35CrNiMo7 were replaced by case-hardened steels 15CrMo5 (F-1550) or 15CrNi6 (F-158), with better resistance to fatigue and wear. Similarly, closed reduction gearboxes became widespread, and open gears are increasingly difficult to find.

"In motors, we passed from conical rotor single-winding motors to classic cylindricalrotor, double-winding motors, so that a single motor can achieve precision speed and nominal speed. In brakes, asbestos has disappeared from the brake pads. In wheels, crowned wheels have been replaced by drive-shaft wheels.

"From the use of materials like C45, now spheroidal graphite casting has become almost universal, with the advantage of higher resistance EN-J51060 and EN-J51070, and better self-lubrication, for standard cranes. In special cranes, forged materials have found their way, as has induction surface tempering.

"It is only in the last twenty-five years of the 20th century that crane manufactures made widespread use of the electric, electronic, automatism and communication technologies. Limit switches in cross and long travel motions, anticollision cells, load limiters, radio controls and even motor control by frequency inverters became common."

Villa explains that at GH, the manufacturer thought it was "very clear" where the next step would be taken: in the field of communication technology.

He says: "We entered the 21st century with the still living results of the electronic and communication technologies, that brought about a new perspective to industrial development in the 21st century, which some call industry 4.0, others consider it a new Industrial Revolution, whereas for others it is the development of smart machines. All technological advances follow their own development and none replaces any other.

"The materials technologies advance, among others, with the development of additive manufacturing or 3-D printing, which consists of the manufacturing of solid, three dimensional objects by laying out a superposition of successive layers of material until the desired figure is built.

"We also have innovations based on electric and electronic technologies, such as controls and sensors and communication with simpler, more easily accessible technologies. How is this affecting crane manufacturing, and how will it affect it in the future?"

"Some changes appear clear, and bring us closer to the concept of "the smart crane". For Villa, using recently developed, high efficiency motors, has enabled GH to reduce energy loss considerably, and this supports a significant reduction in costs as energy is economized during the machine's service life. Similarly, by using regenerative drives, the energy that comes from the braking process is not dissipated as heat as used to be done, but recovered and put back in the system.

He explains: "As sensors and operation controls are developed, the machine will be able to diagnose itself. The weighing cells will indicate the load we are handling and the number of overloads. Together with the time- and cycle-counters, they will tell us if they are working within the parameters they were designed for or if those need to be changed.

"They will tell us when they need to be serviced or when one of the parts needs to be replaced. The temperature and intensity sensors will indicate if something is not OK. It will even be designed to adopt solutions if redundancies have been pre-programmed. "The machine will be able to communicate with the operator or with technical assistance via radio, via smartphone or via GPRS. We will even have the chance to act on it remotely, or diagnose and set up solutions for its optimal performance. Some will define the smart crane as a crane that is able to detect a problem and solve it.

"Anyway, it is obvious that a machine by itself lacks intelligence. But it is also true that, with the help of some sensors programmed by humans, it will be able to self-diagnose and even to prevent manoeuvres that might be dangerous for the people around and for itself.

- The load limiter will protect against overloads.

- The limit switches carriages will protect against impacts against the building, the machine's structure or itself.

- The tilt sensors and anti-sway sensors will prevent manoeuvres that might be dangerous for people or facilities.

- The anti-skewsensors will prevent wheels and girders from wearing, impacts and even derailments.

- The temperature and overvoltage sensors will protect the machine against high temperatures that might shorten its service life or even burn it.

- The vibration sensors will give us notice about incorrect functioning of the machine if some material or mechanical component is damaged. The misfunction sensor of some operations may put into operation redundant manoeuvres in brakes, motors and frecuency inverters. The position sensors indicate the exact location of every mechanism.

The crane, with the sensors we install on it, will be able to self-diagnose more or less problems and its situation.

Villa explains that even if the machine is able to detect problems and self-diagnose - and even to tell us about possible solutions - even if it is able to start redundancies to prevent dangers or keep working, even then, its final repairs will be programmed or done by people, some way or the other. That is, then, the next question: how it communicates with us, with the operator, with technical assistance, or even with other cranes and how people communicate with it.

Here is where communication technology steps in.

He says: "We can have the information de-centralized or even centralized within the crane itself, via modbus, wifi or radio, and from the crane's control center we can access all the information with a USB port, computer, via radio to the radio control's display or via wifi to a smartphone or via telephone to a smartphone or to the central office of its authorized assistance service. 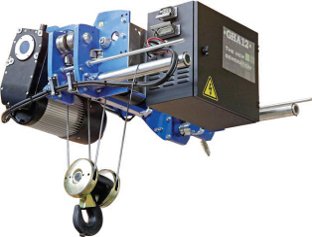 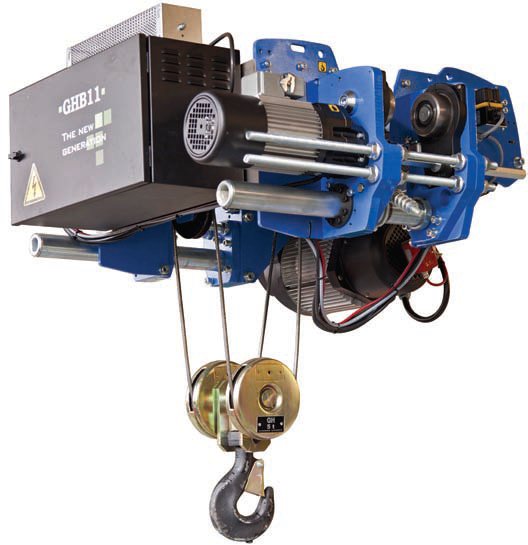