Overall construction is on a downward trend in australia but there are still strong areas of investment and activity, including in transport infrastructure and in house building. sally spencer reports

After a period of strong growth, Australia's construction sector as a whole is expected to shrink over the next four years, according to a Timetric Construction Intelligence Center report. However, pockets of growth are forecast in some sectors - investment is set to continue in residential construction and in transport infrastructure, for example.

Construction within the energy and utilities sector is currently the largest segment at 30.3%. This solid performance is a consequence of high levels of investment in oil and gas and energy infrastructure projects. However, subsequent delays or cancellations of major oil and gas projects and a drop in investment into this sector mean it is projected to lose its number one slot during the next four years. It is expected to account for 20.7 per cent of the total industry's value in 2019.

It's likely to be overtaken by residential construction, which was the second largest at 26.3% in 2014 and is now forecast to rise to 33.4% by 2019. Low interest rates, migration into urban areas, an expanding middle-class population and government efforts to redress housing shortages are all contributing to growth in this sector.

Commercial construction is sounding a positive note and is expected to increase over the next four years, largely due to improvement in the retail and tourism sectors.

According to the Australian Bureau of Statistics (ABS), retail sales turnover grew by 5.5 per cent between January- November 2013 and the same period last year - and this on the back of strong sales in the previous two years. This growth is expected to continue - by 2.19 per cent and to a value of AUD26.9bn (US$23bn) in 2019 - and, as a consequence, more retail and office buildings are being planned.

Infrastructure construction has grown, driven by the development of road, rail, bridges and highways and the modernisation of the country's infrastructure. Future growth in this sector is expected to be only minimal at 0.5% by 2019 - this despite the government's plan to invest AUD50bn in transport infrastructure by 2020.

Flagship infrastructure projects include plans to improve the transport network in Victoria in a move to reduce rail and road traffic and support the state's economic growth. Projects include an upgrade of the CityLink Tullamarine corridor from West Gate Freeway to Melbourne Airport. This AUD850m (US$772m) project is due to be completed in 2018.

Meanwhile, a project to develop the rail infrastructure in Melbourne is continuing with an upgrade of the Cranbourne-Pakenham rail corridor. The AUD2.5bn project is due for completion in 2019.

Also in Melbourne, Public Transport Victoria is investing AUD13.1bn (US$11bn) in a metro rail tunnel project. This project, which is scheduled for completion in 2026, will feature two 9km rail tunnels from South Kensington to South Yarra and five new stations. Transport infrastructure improvements in NSW include the construction of the Westconnex motorway system in Sydney, which will link the city's international airport with Port Botany. Completion is expected in 2023.

Other transport projects include the Sydney Light Rail, the south-west and north-west rail links, a light rail network for Parramatta and improvements to the Pacific Highway.

In Queensland, key transport improvements include the Iron Boomerang rail project, which involves the construction of 3,370km of railway line connecting Bowen, Queensland and Port Hedland. The project, which is costing AUD14.8bn (US$12.5bn), is expected to be complete in 2022.

The strong rise in new house building is largely down to low interest rates, migration to urban areas and an increasing population, and market expansion is expected to continue at a rate of 3.47 per cent to reach a value of AUD65.7bn (US$56.3bn) in 2019.

Taking NSW as an example, the government's AUD15.4bn housing programme includes the construction of a total of 30,000 new homes in eight existing suburbs, including Randwick and Ryde, in 30-storey apartments blocks. In addition, 27,000 homes will be built around eight new railway stations along the north-west rail link, including Kellyville and Castle Hill. Another 60,000 homes will be built in other suburbs, including Wilton. Work is expected to be completed in 2030.

Not faring so well in Australia is industrial construction, which is expected to contract by a CAGR of 4.63% between now and 2019 due to a slowdown in the mining sector. However, it isn't stalling altogether and there are still some ongoing construction projects, including in Queensland.

Here the government-owned North Queensland Bulk Ports Corporation Ltd is planning the Abbot Point Port Expansion, which will include the construction of six new coal terminals and capital dredging of six new berth pockets and ship apron areas. The AUD11bn (US$9.2bn) project is expected to be completed by the end of 2020.

Meanwhile, a project to develop the Carmichael coal mine in the north Galilee Basin is under way and expected to be completed by the end of 2017. The project calls for an investment of AUD14.7bn (US$13.5bn).

And staying with mining, but this time in South Australia, BHP Billiton Ltd is investing AUD39.8bn (US$30bn) in expanding the Olympic Dam mine. Work will be carried out in five stages, finishing in 2014 and will include the expansion of the existing smelter, the construction of a new concentrator plant, a hydrometallurgical plant, a waste rock storage facility, a new tailings storage facility, a new gas-fired power station, a cogeneration power station, a 105km rail line and a rail/road freight terminal.

Notwithstanding the aforementioned power station, it's largely a different story in the energy and utilities construction sector, however. And it's the slowdown in these areas that is denting overall construction figures for Australia.

Up to 2014 there was heavy investment in oil, gas and energy infrastructure, with the market reaching a value of AUD63.8bn (US$57.9bn). However, since then investment has reduced significantly and several major oil and gas projects have been either delayed or cancelled altogether. These include the onshore Browse liquefied natural gas (LNG) development, the Bonaparte LNG project and the Arrow LNG project.

Electricity generation, gas supply and pipeline construction is expected to decline by 35.3 per cent between 2013/14 and 2017/18 and this is due in part to the well-documented decreasing demand for electricity in Australia over the last few years.

This decline, which is contrary to the trend in so many other countries, is attributed to several factors, including the impact of regulatory energy efficiency programmes, structural changes away from electricity intensive industry and consumers reacting to high prices.

The renewable energy sector has also had a knock back after a period of growth stimulated by federal government encouragement, such as the Renewable Energy Target (RET).

The target had been to produce 20 per cent of total electricity demand through renewable sources by 2020 but large-scale investment in the sector fell by 80 per cent, from AUD2bn in 2013 to AUD240m in 2014, as a consequence of the government's mixed messages over RET.

And in Tasmania, Cattle Hill Wind Farm Pty Ltd is constructing a 240MW onshore wind farm on 4,000ha of land at Lake Echo in the Central Highlands.

The project, which is costing AUD641.1m (US$500m), includes the installation of 80 wind turbines and transformers and the construction of a control room, internal access tracks, turbine bases and related infrastructure. The project should be finished by the end of 2019. 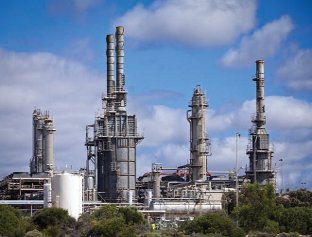