Automatic for the ports

A year ago, Cargotec asked its personnel to come up with bright ideas for the future of automated lifting in ports, and now the company has started helping its clients prepare for that future.

One pivotal idea in Cargotec's Ports 2060 report was that total automation was key to progress in efficiency. Automated stacking crane (ASC) systems are more efficient, removing the cost of human error.

Ismo Matinlauri, vice president, cranes, explains that Cargotec has for some years been automating two major ports in Europe.

To double the volume of containers passing through, CTB ordered eight of Cargotec's next generation ASC blocks, a total of 87 ASCs.

The ASCs made the terminal's container handling process faster and partially software controlled; ASCs stack containers 5 high and 10 wide at 1,200 moves an hour.

The manual operation of straddle carriers is enhanced by a lane access management system running on four straddle carrier lanes, guided by laser motion sensors. At the landside interchange area, the computer-operated ASCs hand containers to trucks for transportation on road.

Cargotec is supplying not only the equipment but also terminal operating systems (TOSs) from its new subsidiary Navis.

"Ensuring these ports are efficient is an essential part of keeping competitive in today's economically unstable industry. As terminals become larger, automation can be the best solution for reaching the required efficiency levels. There are a number of automated terminals under development," says Matinlauri.

The automation of STS cranes is also being considered. "There is pressure to develop STS automation. Ships are becoming bigger and there's a need to unload containers off the vessel in a shorter time," Matinlauri says.

Automation is happening already in Europe, Matinlauri says, because the high cost of labour and the necessity of regulatory compliance.

Matinlauri says: "You see the automation taking place first in the high-labour- cost countries where there are strict regulations to enhance safety and decrease emissions.

"The regulations vary country-by-country, but they are gradually becoming homogeneous even globally. Large port operators will lead the way in spreading more sustainable port operations, as well as automation," he says.

"The largest port operators have terminals on different continents and they gradually develop technologies in all locations suited for local conditions. It takes time but automation will gradually move in. That's my prediction.

"There are other ports where there are ASCs. In the US, the APMT Virginia terminal is one that has started also some years ago.

"In California at the Port of Long Beach there is another automated terminal, TraPac, which is estimated to be operational less than two years time."

Not only does the choice of which equipment to automate depend on process, but it depends on the size of the terminal. "One can use shuttle carriers, straddle carriers or automated guided vehicles (AGVs) that are available for horizontal transportation depending on layout and size of harbour. You can optimise for the size and traffic pattern of the terminals," says Matinlauri.

The potential of advances in computing that handles automating means that customers may one day save costs by directly monitoring their own shipments at ports through the internet.

"If we think about the development of the internet, 10 or 15 years ago, an internet connection was very expensive. We were relying on expensive lines hired. But now you can chat for free as hardware is no longer location-dependent and data transfer is virtually free of charge."

Matinlauri explains how customers could use a cloud-based service: "It could provide its services from anywhere. Customers would not have to buy actual software but could just use it through the internet when they need it. Information transfer globally with freedom from the software and hardware side. Facebook would not be possible if people had to pay for information transfer.

"I would imagine that with the improvements in hardware and software, the growth in the amount of information volume moved today could meet the substantial requirements of an automated terminal, which then becomes a sort of artificial intelligence."

"Containers are telling the story of what they have inside. They can tell you anything that is happening with them through an RFID data chip in each container. So any container would have a chip communicating with the terminal operating system, and this artificial intelligence would superwise loading, unloading and stacking. This minimises the idle time of equipment and moves containers in the fastest possible way.

"Intelligent customisation of container handling data could in each case minimise the damage to goods and maximise the best transport conditions."

After automation, the next step in port lifting technology could be increasing the amount that can be lifted in one go. Cargotec proposed in their Port 2060 study container packages, with 60-plus containers in one cargo block, would make use of nanofibre ropes on lifting systems that have not yet been engineered.

NASA is one of many organisations that have expressed interest in developing nanofibres in order to cheaply service space stations in orbit using space elevators running on nanofibre cables.

"Nanofibre development might need 20 or 30 years, but if you realise the stories about space elevators will be one day true, it is clear that there are really big efforts behind nanofibres.

"The space program developed Teflon to reduce friction in various space applications. There was a lot of money put in this, and now normal applications have been developed, and frying pans with Teflon surface are part of everybody's daily life -- there's endless opportunities for new applications. Other new materials might replace steel as a material for the container. It's a question of the steel being cheap at the moment, but it could also be that containers are made of another material in the future.

"Airplane makers have created composite materials that might be useful for containers or equipment moving them if the price was right. It would be justified in the lifting business in special applications there where the material makes the difference. When the lift is quite heavy, you need to have the strength excess of steel while reducing the weight."

A great variety of other technological developments could come to fruition in phases, and the question of how all of this will happen is the focus of the report.

Matinlauri says: "The issue was what would the best roadmap, stepwise, of development. At the moment focus is on environmental sustainability, but what happens after?"

At the current pace of research, he says, environmentally sustainable energy may be the first technology to arrive in ports worldwide, followed by automation and nanofibre ropes or similar issues considered rather exotic today. While the timescale of automation's development is uncertain, there's no doubt that improvements are already taking place. Matinlauri says, "There are some facts that we know; fully electric equipment is coming and the need for automation is definitely growing. The question is how fast and how clever it can be. Job descriptions will change and the need to increase speed and efficiency will steer the development." 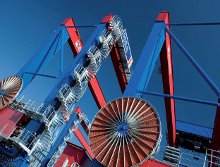 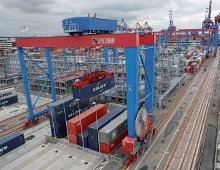 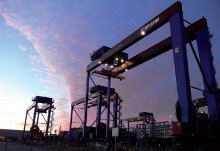 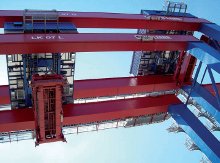