Working with its strategic partners Crofton Industries and RLT Engineering, Engineered Rigging has assisted with the dismantling of three Kone ship-to-shore (STS) container cranes for the Virginia Port Authority in the US.

The challenge was dismantling the cranes at their existing height along the waterfront.

RLT devised a concept and strategy to safely hold the main boom and trolley beam of each crane in place while it was cut free from the portal gantry legs, and then lower that entire section to the bottom seaside and landside cross beams for dismantling.

The group determined that four Enerpac HSL20006 225-ton strand jacks from Engineered Rigging’s rental fleet would provide the lifting capacity to safely secure the load during the cutting process and then control the lowering sequence from the 150ft elevation.

First, a structural analysis of the STS crane structure was performed by RLT to determine if the gantry portal legs and main frame could support this lifting solution. With limited drawings and crane information, it was calculated that the entire upper section weighed approximately 600 tons inclusive of the main front boom, mast, backstay bracing, machinery house, trolley beams, hoist, trolley and spreader, and operator cabin.

Engineered Rigging installed the various components including the strand jacks, four hydraulic pumps, load anchors, wedges, strand and mounting grillage, which would be used for lowering the main boom and trolley beam section. In addition, two certified equipment operators and technicians from Engineered Rigging were integrated into the on-site project team to support efforts throughout the process.

To ensure proper loading and load distribution, the Engineered Rigging crew engaged and checked the system before Crofton initiated the cutting procedures at the reinforced shoulder girders. Once the upper cross beams were free and clear, the boom and trolley assembly was lowered until secure on the bottom landside and seaside cross beams. The loads for each jack were monitored throughout the lowering process via a computer system to ensure the loading and synchronised lowering was controlled.  The Crofton team then secured the boom segments to the bottom landside and seaside crossbeams so that dismantling could begin.

The strand jack system was then disassembled and reassembled for the next portal crane. The cutting and controlled lowering process was repeated until the booms from all three cranes were lowered and secured by Crofton’s project team.

The cranes were being removed to make way for a new offshore wind turbine assembly facility that was moving onto the old port complex.

Engineered Rigging said: “The collaborative efforts of the three companies along with the specialised equipment technology proved to offer a successful, safe, innovative and cost-effective solution for the Virginia Port Authority project challenges.

“Engineered Rigging is proud to have contributed our heavy lifting expertise by supplying the right equipment and on-site technical support needed by this project.” 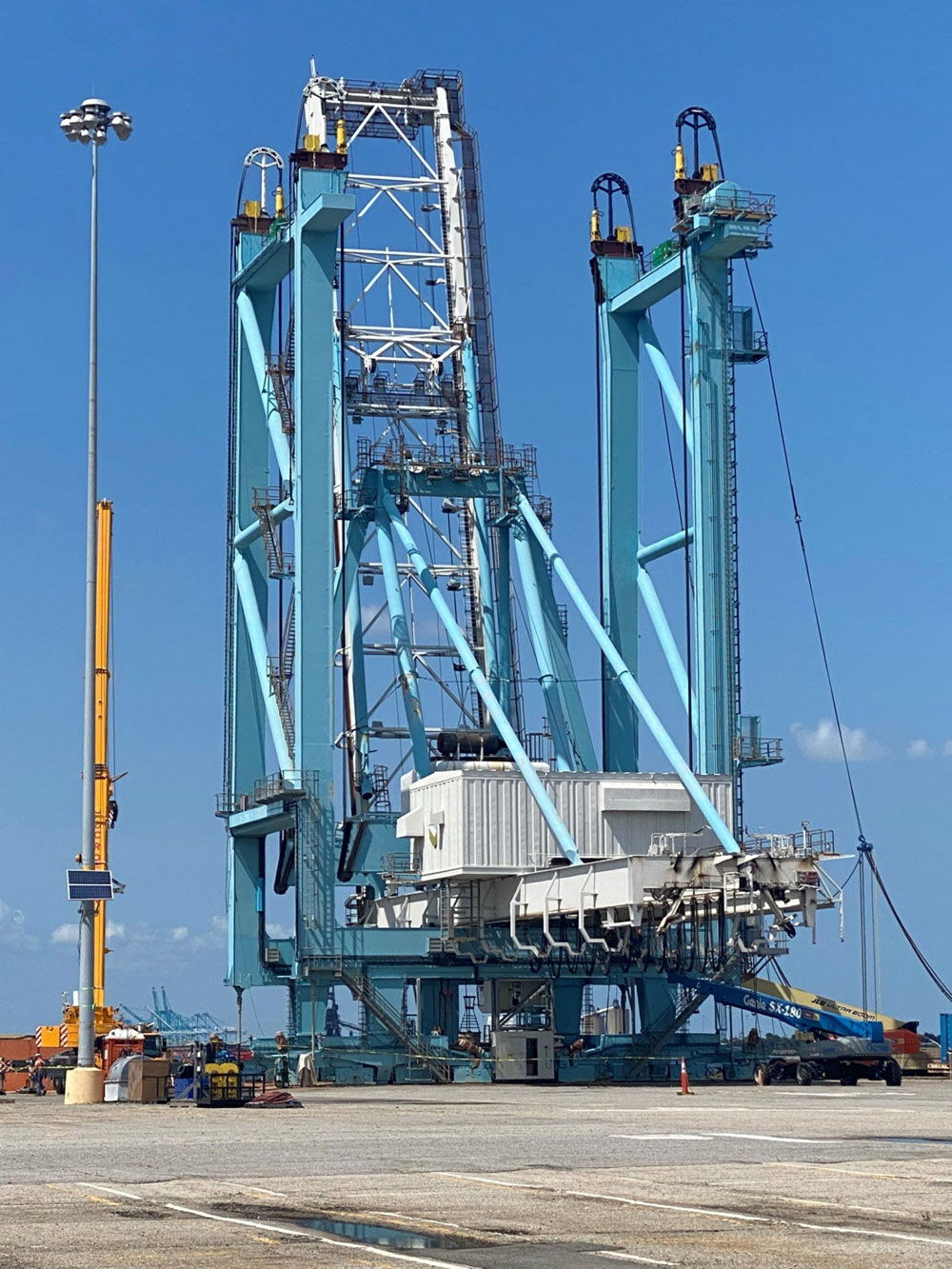 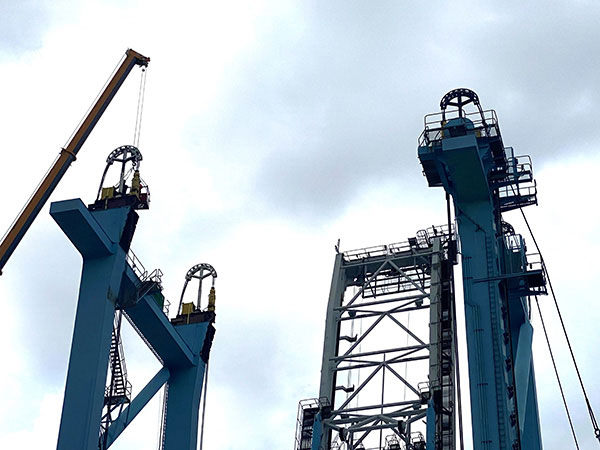 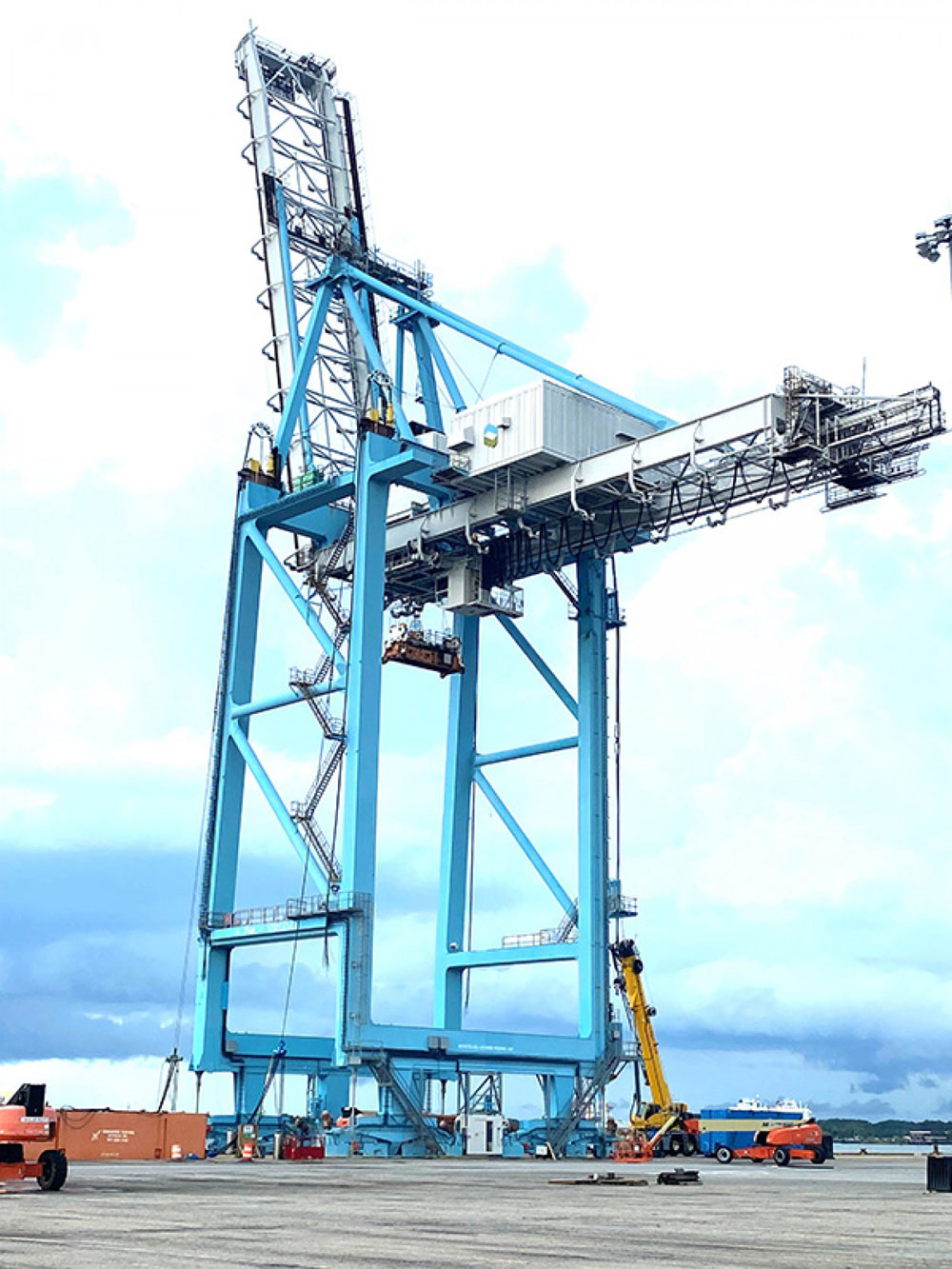