A view from industry

As a member of various standard committees, including the maintenance team for IEC 60204-1 "Safety of machines - electrical equipment", I am aware that there is some confusion regarding the use of cableless controllers to provide the emergency stop function of a machine. I hereby attempt to explain some of the reasons why the standards say what they do. 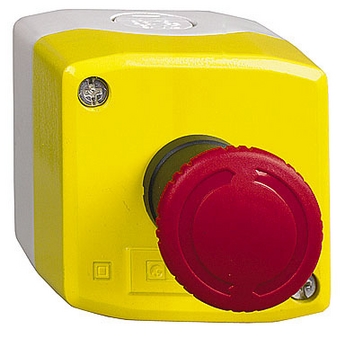 IEC 60204-1 states that "emergency stop devices shall be located at each operator control station and at other locations where the initiation of an emergency stop can be required". In the context of cableless controllers (often termed 'radio' or 'remote' controllers), it also states that "cableless control stations shall include a separate and clearly identifiable means to initiate the stop function of the machine or of all the operations that can cause a hazardous situation.

The actuating means to initiate this stop function shall not be marked or labelled as an emergency stop device."

In some applications it would be very advantageous, in terms of reduced machine costs, if the cableless controller could be considered to meet the requirement to provide an emergency stop. However, it is very unlikely that a cableless controller can be adequate, for a number of reasons that I will explain.

Firstly, let me state that whilst the integrity of the better cableless controllers on the market is not the issue, it is the fact that they are both portable and battery-powered that makes them unsuitable for use as the sole means of initiating an emergency stop function on a machine. They have a range outside which they cannot control the machine, and that range can vary with environmental conditions. If they are taken out of range during use, then a stop signal is automatically generated after a short delay, but that in itself could result in an increased risk, if someone is unaware of why a machine has stopped. Avoiding the risks that might occur when restarting after such a stoppage, or during changeover between local (i.e. hard-wired) and remote (cableless) control needs very careful design of the control system.

The thinking within the standards committees is that the operator of a cableless controller doesn't need the stop button to be marked as an emergency stop, since he's been trained and therefore knows which button to press if the need arises. However, if the cableless controller is not in use, and is lying by a machine, how is a person who might see an emergency developing expected to know what to do?

The untrained person doesn't know whether the cableless controller is active or not, or even which machine it relates to, and so he might waste valuable time pressing buttons on an inactive or unrelated controller. To put it another way, cableless controllers are, like any other control station, intended for use by people who know what they're doing, whereas emergency stop devices should be easy and safe to use by anyone who might be in the area.

I'm aware that some people have expressed concern about the idea that untrained persons should be able to operate an emergency stop, on the basis that in some applications it can be dangerous to use the emergency stop and so it should be available only to the machine operator. If this is the case, then in my opinion there is something fundamentally wrong with the machine design! All machines need to be capable of being brought safely and quickly to a complete stop, without creating additional risks. In addition to this, all machines need to be safe under all foreseeable circumstances, including loss of the power supply.

Untrained persons might need to stop the machine in an emergency, without needing to consider the effect of such a command, and hence they need access to a clearly recognisable emergency stop control, which to most people worldwide would mean a red mushroom-shaped button on a yellow background.

Another requirement for emergency stops is that they have to be available at all times. This is often not possible with cableless controllers, due for example to battery failure, or if they are dropped out of reach of the person who needs them. The red button/yellow background colour combination is recognised worldwide as indicating a device which will always stop a machine or process, without the need to consider the effects.

Yet another potential problem can be seen when considering that to comply with international standards emergency stop buttons are normally latching buttons, which need to be reset after actuation. This means that the reset has to be done at the place where the emergency stop was initiated, so the person performing the reset should be able to see that the reason for actuating the button has been cleared. With a portable controller, there is no way of knowing where it was located when a button was pressed, so it might not be possible to know why the stop button was pressed.

Identification of the emergency stop device

There is no legal requirement, at least in Europe, for emergency stop buttons to be red with a yellow background. However, that is the requirement in several standards including the international standard ISO 13850 "Safety of machinery. Emergency stop. Principles for design", and would be expected by most people around the world. It stands to reason that cableless controllers should not use the same colour coding, although a red button with say a black background would be suitable.