German rental firm Schmidbaue has used two Liebherr LTC 1045-3.1 all terrain cranes to replace the crane track for a gantry crane at the crane manufacturers own excavator plant in Kirchdorf.

The capacity of the indoor crane had to be increased, as the excavator components it lifts have become larger and heavier. By replacing eight girders from the gantry crane Liebherr was able to its the lifting capacity from 20t to 40t. The two cranes provided by Schmidbauer Crane and Heavy Transport lifted and assembled the girders, each of which weighed 6t.

The two LTC 1045-3.1 models were fitted with an assembly jib due to a lack of space between the girders and the existing installation system. The restricted space also meant it was also not possible to use a hook block. 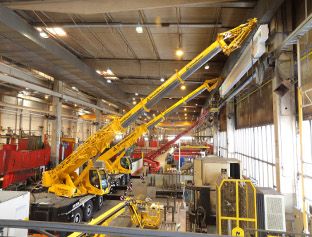