J D Neuhaus has played a key role in the construction of the world’s largest observation wheel in Las Vegas.

The manufacturer supplied three air-operated hoists, each with a 50 tonne lifting capacity, for the wheel project situated at the new entertainment district, The Linq.

The observation wheel is 550 feet high, nine feet higher than the Singapore flyer, and has a capacity to hold 1,120 passengers.

The lifts included 18 temporary radial struts, each weighing 40 tons, together with transfer trusses of similar weights as well as individual outer rim segments of the completed wheel.

In addition, a total of 112 cable-locking assemblies initially assembled at 50 percent tension loads, were lifted.

Radial struts were installed to provide the accurate spacing of the individual wheel rim segments from the central hub unit during initial build assembly.

The cable locking assemblies sequentially replaced the struts, providing the radial spokes of the completed wheel assembly once they were fully tensioned.

The J D Neuhaus range of Profi TI hoists can operate from a six bar compressed air supply, with a total of 19 separate models offering lift capacities from 0.25 metric tonnes up to an 100 tonnes.

Las Vegas' new wheel structure incorporates 3.5m pounds of steel, with the 112 cables forming the tensioned spokes of the structure having a combined total length of 25,256 feet. Each cable has a breaking force of 550 tons. 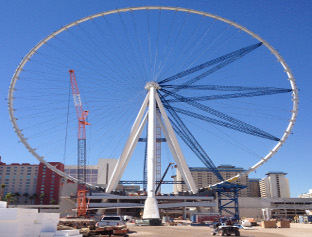