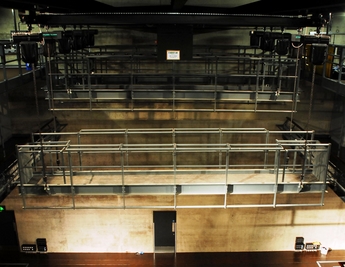 The units were supplied in matt black finish and so disappear in a darkened area of the roof that they operate within, above the audience. The lifting facility on each bridge carriage is performed by four Verlinde Stagemaker hoists.

The lifting facility on each bridge carriage is performed by four Verlinde Stagemaker hoists, each rated for 1,000kg to BGV-D8+, which means each carriage can hang 4,000kg, without the need for any secondary safety devices.

BGV-D8+ exceeds the current BS7905/7906 standard applicable in the UK for dead hangs of equipment without the use of secondary safety devices.

The SM10 1004 M1-B units used have a 10:1 mechanical factor of safety and also a secondary braking system fitted to them. All the certification of the hoists to the BGV-D8+ standard was done by Verlinde.

Each bridge tracking unit runs on the two steel runway beams mounted in the roof of the theatre and all three units are powered with a single totally enclosed and finger safe power feed system.

The bridge tracking carriages span 9.2m across the theatre and run the complete length to give lifting coverage anywhere within the theatre when using the technical bridges.

The bridge tracking unit was constructed using variable speed underslung end carriages with stepless travel motors capable of running up to 20m per minute. Each carriage is fitted with articulating trolleys and the overall design of the carriage means that the unit does not skew and lock on the running tracks. "The electrics on board the unit are simple and no complex encoder or inverter systems are required to keep the units square on tracks and synchronised on either side on the venue," Verlinde said.

The articulated trolley carriages were designed to allow the full 4,000kg safe working load to be tracked up and down the length of the steelwork tracks. Theoretically, you can fly and move 12,000kg up and down the theatre simultaneously.

Hoist UK's Paul Jordan said: "Our carriage solution was a simple one, as the system uses existing and standard components in its construction. The clever bit of the project is knowing how to put all the components together and engineer the system to work correctly first time and every time."

Each carriage is fitted with an anti-collision system so that you cannot run into another carriage on the same track. If a tracking carriage gets too close to another unit, as all three are on the same track beams, it cuts the power to the motors in that direction and will only allow you to drive away from the other unit, explained Jordan.

Control of the tracking carriage is using a radio control system with each unit having its own control handset. The operator can stand anywhere inside the auditorium and fly any or all of the carriages up, down, forward and back within the auditorium.

Jordan continued: "One of the misconceptions is that radio control is dangerous for lifting equipment as rogue signals could start things moving without the operator having control. This is complete rubbish. Modern and reputable radio control systems such as ours operate on frequencies specifically assigned for lifting equipment, so they will not interfere with radio microphones and other radio based equipment."

He added: "The frequency is only the carrier for the uniquely coded signal that makes the equipment move, so at worst if the frequency is already being used by something else, the unit will not move as it won't receive its coded message. Frequencies on the radio control systems can be changed to operate without any interference. I have supplied hoists and lifting systems working on customers sites who have 250+ radio controlled hoists/cranes and they don't have any problems with interference," he said.

Mylan Lester, project manager for the ES Group, said: "The Hoist UK installation team and equipment arrived on schedule and installation was carried out smoothly and efficiently within the pre-agreed installation and commissioning schedule. It was a pleasure to have them on site."